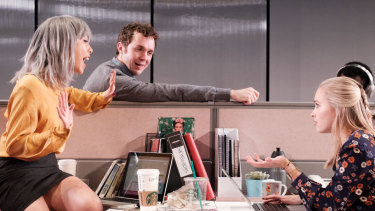 Offices are like dense traffic: they can distort human behaviour, inducing irrationality in otherwise reasonable people, and paranoia, poison and vengefulness in those who are a nudge less stable to begin.

"I've forgotten how to be . . . in an office," says Lorin near the play's end. "Isn't it funny how these places are just sort of the same? Almost down to the same people. Why is that, do you think?"

He could be the playwright, Branden Jacobs-Jenkins, squeezing out the essence of his 2015 play, which is set firstly in a New York magazine office, and later a Los Angeles TV production office. In both environments, he depicts people behaving badly: being false, spiteful and gossipy; hoisting themselves up in the high-rise jungle by stamping on the fingers of those who are only just clinging on to the windowsills. It is a savage appraisal of humanity and contains its own slice of barbarity that is best left as a bombshell for those who go to see it.

Jacobs-Jenkins has six actors playing 13 roles, the doubling contrived to highlight his depiction of homogeneity in office personnel and their conduct. Precious few of the 13 are especially appealing, but he tempers the people-behaving-badly onslaught with rapid-fire, ping-pong dialogue, and director/lighting designer Alexander Berlage (for Outhouse Theatre, and who has just had his gripping production of American Psycho running at Hayes Theatre) further tempers it with astute casting. 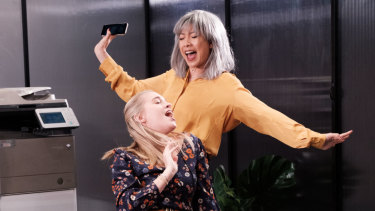 Harte is ”exceptional” in her debut performance while Michelle Ny applies a blowtorch to her role of Kendra.Credit:Clare Hawley

Despite being penned in a vernacular that is almost painfully naturalistic, with seemingly no one able to construct a sentence without using "like" multiple times, the dialogue is also craftily heightened ever so slightly, so we are allowed to find humour in the characters' self-obsession.

The sharpness of the stabbing interactions is somewhat undermined, however, by the longer speeches that eight characters deliver, and that can feel overly-contrived set-pieces in the context of the surrounding dialogue.

The key exceptions to this are the Act Two speeches delivered by Nan (Georgina Symes) and Callie (Annabel Harte), both dealing with the same subject matter of how Nan coped with a particular trauma – and simultaneously discovered she was pregnant.

Jacobs-Jenkins' female characters are particularly strongly drawn, the corollary is that they are also more likely to do the stamping on fingers than the males, who are all blessed or cursed with softer underbellies.

Harte is exceptional in making her Sydney stage debut, realising three roles with both panache and truth, and she holds her own when Symes turns up the heat in Act Two, and both actors create an intensity that seems magnified, like an extreme close-up on a screen. Michelle Ny is just as good, applying a blowtorch to the role of the relentlessly pushy Kendra.

Rowan Witt superbly realises the vulnerability, weakness, softness and nervousness of the apparently talentless Dean, who is initially set up as the protagonist, until the focus begins to spiral. Justin Amankwah is less successful as the benign Miles, but entirely convincing as Shawn, an amusing Starbucks employee. Finally, Reza Momenzada struggles to hit exactly the right pitch as the downtrodden Lorin of Act One but nails the more centred version of the character in the final scene.

Designer Jeremy Allen has opted for a false proscenium arch to contain the literal office and cafe sets, and Berlage has ensured that the hyper-realism keeps backhanding us with its depiction of a world in which people struggle to retain their core humanity, and in which empathy is a saleable commodity.