The government agency that oversees the Great Barrier Reef has warned it is at risk of another summer of coral bleaching as the major parties prepare for an election campaign clash over management of the natural wonder. 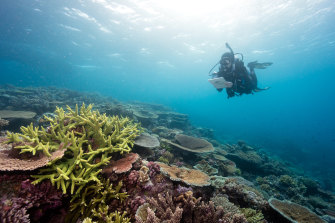 Mr Albanese said the foundation, which received $443 million in seed capital in 2018 and set a target to raise $357 million in private funds, had failed to deliver value for taxpayers. Australia’s Auditor-General found in May the organisation had raised just $54 million – 99 per cent of which was for in-kind services, with just $684,000 in cash donations.

The Opposition Leader also accused the government of being “hostage” to climate sceptics in the Coalition.

“If you’re allowing [Nationals leader] Barnaby Joyce and the Nationals party to control your climate policy, then you’re not fair dinkum about protecting the reef. It’s as simple as that,” he said.

A spokesman for Environment Minister Sussan Ley said the government had committed $1.9 billion for the reef to date.

“The Morrison government will continue to invest heavily in the reef and in its community,” the spokesman said.

The Great Barrier Reef is a relatively uncontroversial environmental issue for both major parties to campaign on heading into the federal election, due by the end of May, with the tourism drawcard supporting 64,000 jobs and contributing $6.4 billion to the economy.

Central Queensland, where coal and gas are major industries, is a key battleground for votes and speculation is rife in the sector that the government will soon make the reef a subject of an election commitment with a hefty price tag.

Scientists say both major parties’ climate commitments fail to act consistently with the global action required to reduce carbon emissions enough to save the reef. The government and Labor have committed to reach net zero by 2050 and to curb emissions 28 per cent and 43 per cent by 2030, respectively.

Climate change is heating ocean and atmospheric temperatures, raising the risk of mass bleaching events. The Great Barrier Reef suffered severe back-to-back bleaching that wiped out swathes of corals in 2016, 2017 and 2020.

While there have been consecutive La Nina weather events, which typically bring cooler conditions, in the past two years, Australia has warmed by 1.4 degrees, faster than the global average, and scientists warn the reef is now at risk of bleaching every summer.

The Great Barrier Reef Marine Park Authority is expecting another bleaching event this summer, with corals already under heat stress due to elevated sea surface temperatures since December.

However, the authority said on Friday it remained to be seen if bleaching would be small or large scale, with its severity dependent on cloud cover, rain or cyclones.

“In the past, La Nina conditions would have meant very little chance of mass bleaching on the reef, but as average sea surface temperatures are rising, this is no longer the case,” a spokesperson said.

“Climate change is the greatest threat to the Great Barrier Reef. Only the strongest and fastest possible actions to decrease global greenhouse gas emissions will reduce the risks and limit the impacts of climate change.”

Meanwhile, the government faces a test over the reef from the United Nations Educational, Scientific and Cultural Organisation (UNESCO), which is considering another move to rescind its World Heritage status.

UNESCO issued a draft decision in June to list the reef’s World Heritage status as “in danger”, citing concerns over Australia’s climate change policy and management of water quality. While a majority of countries on UNESCO’s committee voted against downgrading the reef’s status, Australia is required to provide an update to justify its World Heritage ranking by next month.