Move over Big Banana and Big Prawn, a new big thing is readying to hoon into town with the Prime Minister’s backing.

The Geelong council is examining whether to expand its tourism offerings with a big ute on a pole in the town that had a long history of automotive manufacturing.

Scott Morrison drove in on Thursday for a media appearance with his candidate for the marginal seat of Corangamite.

Even though he was fresh from his hot lap at the Bathurst 1000, he was stumped by the question from a local reporter whether he backed the Big Ute dream.

“A big what, sorry?” he asked, prime ministerial eyebrow raised.

Fortunately, Mr Morrison was in town for an announcement about housing that involved plenty of tradies in utes, one of which drove past as he answered.

“I love utes. How good are utes? And how good would a big ute be? That’s what I’d say.

“I can remember driving up the Pacific Highway in NSW and there was the Big Oyster and the Big Prawn and Big Banana, all of these things.

“I think it is one of the amusing elements of these things and I think it is done with tongue-in-cheek as well, which is I think very consistent with the Australian sense of humour.”

He then managed to change gears to return to the task at hand, saying even more important than big utes were “real utes” at work sites.

“I mean, you can have a big ute on a stick; what I want to see is tradies in utes on work sites building homes for first home buyers.” 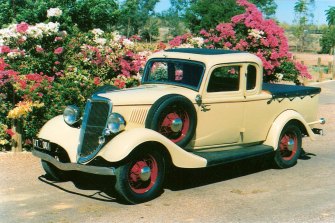 Residents and a councillor in Geelong are campaigning for a “Big Ute” in the town in homage to its Ford manufacturing history.

City of Greater Geelong councillor Kylie Grzybek proposed a feasibility study into installing a 1934 Ford ute on a pole and re-establishing the Geelong Motoring and Industrial Museum at a council meeting a fortnight ago, prompted by a petition from listeners to a local radio station.

“We all know of the Big Banana in Coffs Harbour, the Giant Koala in the Grampians and the Big Prawn in Exmouth,” her motion said.

“With Instagram and personal mobile phone cameras, these sites have entrenched themselves to tourists on the must-visit list, but what is our big thing? Why can’t it be the Big Ute co-located on the same site as a Geelong-based museum?”

The federal seat of Corangamite, won by Labor’s Libby Coker in 2019, attracted multibillion-dollar promises from both major parties at the last election. With another campaign revving up, maybe Big Ute proponents should ready their bank accounts.