How lazy are YOU? Take the test to find out how your bad habits compare to the rest of the UK

A new test has challenged the nation to answer a series of questions truthfully in a bid to find out just how lazy they are compared to the rest of the UK.

On average, adults spend just one hour per day walking, indulge on six takeaways a month and do shy of three hours of exercise per week.

That’s according to ‘The Lazy Scale’, which has been designed by Great Bean Bags, to assess your daily habits and offer you a score of ‘laziness’ based on the national average, with a rating of one being the healthiest and ten, the most lazy.

The scale also assesses activities including how many hours you spent working in a week, sleeping and also how often you brush your teeth to find how habits differ across the country. 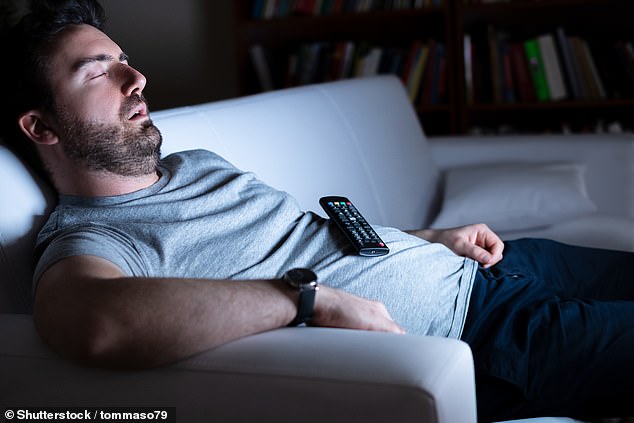 ‘The Lazy Scale’ has been designed by Great Bean Bags to assess your daily habits and offer you a score of ‘laziness’ based on the national average. Pictured, stock image

Use the full app here: The Lazy Scale

The nation’s average is six and so the tool can be used as a barometer when it comes to getting healthy this January – but how will you fare when you give it a go?

With the lazy scale showing that on average we have one takeaway per week – sometimes more – cutting out fast food can be the first step to achieving successful New Year’s resolutions, explained nutritional therapist, Claudia le Feuvre.

‘We know takeaways aren’t healthy, but we perceive advantages that keep us trapped in the same cycle – in this case ‘secondary gain’ might be the convenience, speed or appeasing someone else by getting a takeaway,’ she explained.

‘We even justify it through all kinds of self-talk like ‘it’s been a hard week’ and ‘I deserve a treat’ which can certainly play on our minds and have us heading into the takeaway without even realising it.’

The questions in the test include a series of topics – including everything from sleeping to eating habits. Pictured

‘Fast foods are often formulated to achieve the ‘bliss point’. This is the optimal blend of salt, sugar and fat. If you go for a fast food option, try to eat slowly and savour and enjoy every bite.’

‘After that, it won’t take long to realise why most people wolf down takeaways. When you really, properly chew them, they don’t taste so good and it becomes much easier to avoid the lure of the bliss point.’

Patrick Tonks, creative director at Great Bean Bags, added: ‘We wanted to help people that might be putting New Year’s resolutions in place – we know how important it is to kick back and relax, but we have to eat healthy and do plenty of exercise as well, with moderation being key!

‘Resolutions are difficult to stick to, so we thought something that offers people a score on their current habits can give them a goal to beat and something to aim for.’

Celebrities
Queen Elizabeth is addressing her nation. The monarch marked Commonwealth Day during an appearance on a BBC One television special...
Lifestyle
Scientists have identified a “space hurricane” ― an approximately 620-mile-wide whirling mass of plasma in the upper atmosphere above the...
TV & Movies
Grey’s Anatomy is one of the most popular medical dramas on television and has been a force to be reckoned...
World News
TRIBUTES have today been paid to a "lovely" mum allegedly murdered alongside her two-year-old daughter after disappearing from their home....
Beauty
While the Covid-19 pandemic has halted the cadence of everyday life for just about everyone, the world is now beginning...
Fashion
GalleriesCollection Lucie and Luke Meier strongly believe in the power of clothes. They think that dresses enable individuals to express...
Recent Posts