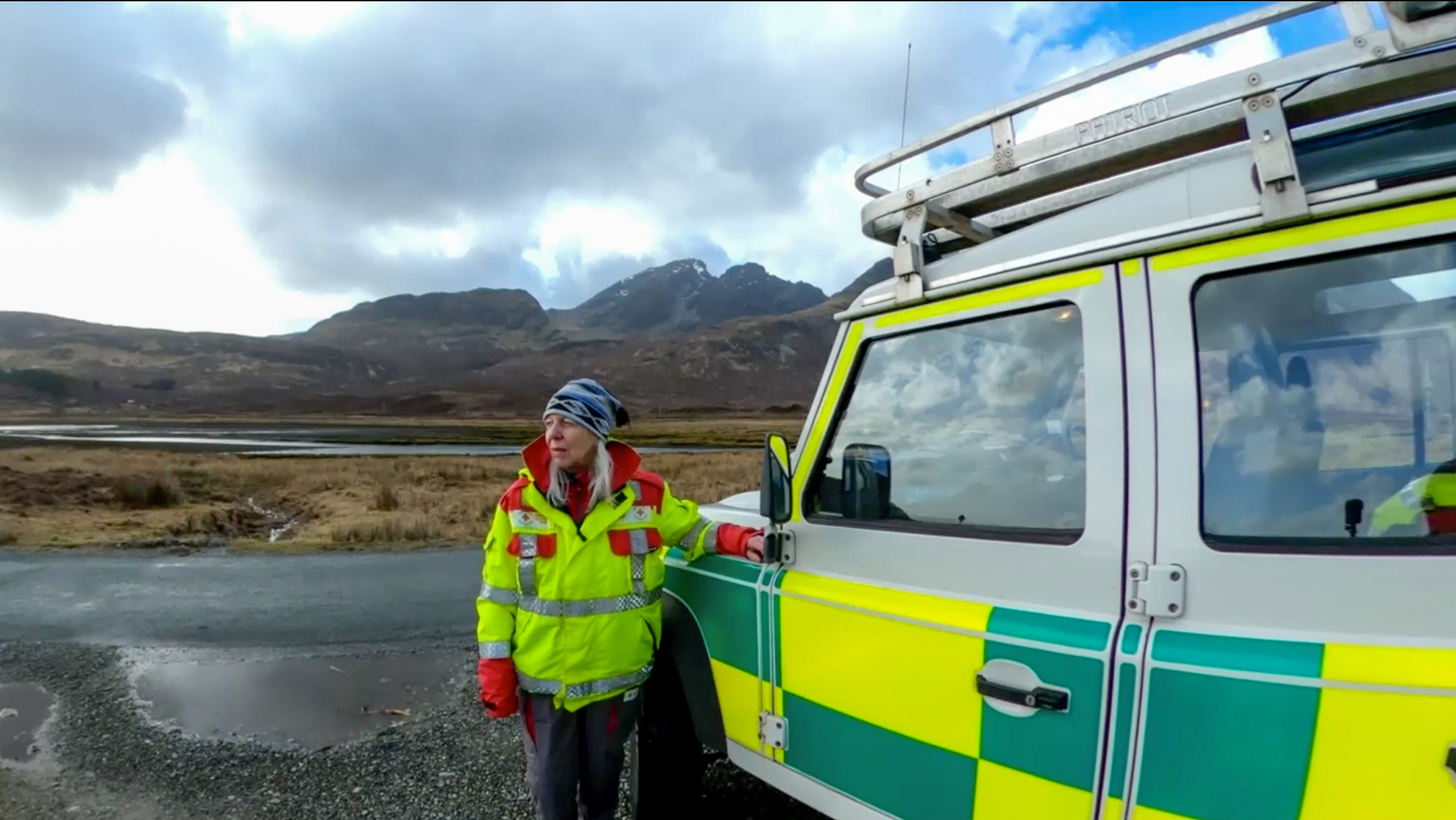 It was an emotional moment for Kate* as she waved goodbye to her friends, who had gathered to see her off from Caithness General Hospital.

Kate had terminal cancer and we were transporting her to the other side of the UK so that she could spend her final days with her daughter.

For me, this is the very essence of what volunteering for the British Red Cross is about – helping people in times of crisis. And it’s one of the most special things I’ve ever done.

As soon as the pandemic hit last year, I knew I wanted to try to do something to make a difference.

So I’ve driven thousands of miles across the Highland region of Scotland – where I live – to deliver essentials like PPE and food to care homes and medical centres in isolated rural communities.

At the beginning of the pandemic, I’d make about two to three trips a week, often driving for hours on end on difficult roads, and in challenging weather. No dual carriageways up here.

One of the trips I did was to drop some basic supplies to a woman caring for her husband – who lives with dementia – and her daughter with Down’s syndrome, meaning the family had been in isolation since the pandemic began.

It was a seven-hour round-trip from Inverness to pick up some PPE and deliver it to their remote community in Skye that felt like the middle of nowhere. The final eight miles of the journey were down a single-track road with atrocious conditions, but it’s the kind of thing that I like doing.

Around April last year, the charity asked its volunteers if any of us would be interested in signing up for the ambulance support team, which assists the NHS in transporting patients to and from hospital.

I jumped at the opportunity, signed up, did a bit of training and then became an ambulance support driver.

Then in November, an email came through asking for volunteers to urgently transport an end-of-life patient roughly 870 miles from John O’Groats down to her family near Land’s End in Cornwall – essentially the very top of the UK to the very bottom.

I immediately thought what a really great thing it would be to do that for someone, so I gave my name and availability, and it matched up with what they were looking for.

Four days later, I was at Caithness General Hospital in Wick at 7am to pick up Kate for the mammoth journey ahead. I introduced myself as the person driving her down but – even though she was very determined to be strong throughout it all – I think it was all quite overwhelming for her.

Her friends who came to the hospital were essentially saying their final goodbyes because they knew they wouldn’t be seeing her again.

We set off with Kate securely strapped into a trolley cot (with her therapy dog sleeping by her side too!) in the back of the ambulance, as well as a couple of clinicians on hand, plus her husband and friend following behind in a car.

Our first stop was Inverness, to pick up an amazing nurse named Daniel, who made sure she was not in pain and helped keep spirits high throughout the journey.

We made our way down the country slowly because Kate was quite unwell so we needed to stop periodically for her care needs. Kate’s husband also helped walk the dog during rest breaks, which was lovely.

Even though she was in quite a lot of pain, she was chatty and so excited that she would be seeing her daughter soon. She was also surprised to learn that we were all volunteers – she thought we were being paid to do it.

At one point, Daniel asked what she wanted to eat and we were surprised – because she didn’t have much of an appetite – to hear her say she’d like a burger!

Finally, at 2:30am – 19.5 hours after first leaving on the journey – we arrived at Kate’s daughter’s home and everyone breathed a sigh of relief. We all played our part and it felt like a huge team effort from everyone involved.

Kate’s daughter was overjoyed to see her mum and so thankful to us for driving her there. She had bought us each Cadbury Heroes advent calendars to say thank you and I was so touched by it.

Two practice nurses arrived at the home about 10 minutes after we did to make sure the transition was as smooth as possible and Kate was comfortable in her new surroundings.

It was very emotional saying goodbye and leaving her felt odd. I think because we all felt completely focused on her on the way down, it was quite tough to leave her.

We got to our hotel at 3:30am but I didn’t sleep at all. I just couldn’t stop thinking about it and the impact it had on me. As we were driving back to Scotland at 7:30 the next morning, the mood was one of happiness and relief.

It felt like an honour to do what we did – and that’s why I volunteer.

It can feel completely overwhelming in not knowing what to do to make a difference in the world – from global environmental disasters to the pandemic – but opportunities like volunteering make me feel like I’m doing some good.

It might just be delivering PPE or transporting a patient, but it’s making a huge difference to the people affected.

Two months after driving Kate to be reunited with her daughter, I was made aware that her death notice was in the local paper.

As soon as I found out, I was sad that she’d passed away but I was also happy that she’d got her dying wish to be with her family in her final moments. She’d had roughly six weeks with her daughter and that was a truly comforting thought.

More than half a year on, I’m still volunteering to deliver PPE and I get quite emotional sometimes when I think about that day. That’s the power of work that we do.

I haven’t managed to bring myself to eat the last chocolate in that advent calendar though.

*Name has been changed.

To mark National Volunteers Week, the British Red Cross and Land Rover have released a short film capturing life as a volunteer on the frontline of the pandemic, you can watch it here.

Volunteers’ Week takes place 1-7 June and highlights the amazing ways people can give back and help others. To get involved click here.