In June,I spent 50 hours riding the legendary Trans-Siberian Railway for more than 2,000 miles across four time zones in Russia.

At5,772 miles (9,289 kilometers), the Trans-Siberian Railway is thelongest railway line in the world, connecting Moscow to Vladivostok in far Eastern Russia.

I rode a portion of the line from Novosibirsk to Moscow, and it was an experience I’ll never forget.

One of the many surprises on my journey was that, for most of it, I was sharing a cramped compartment not with tourists, but with Russians who spoke little to no English.

Before I left, I did something that made my journey much easier and more pleasant.

The smartest thing I did was downloading the offline version of Google Translate.

I would’ve had an entirely different — and far lonelier — experience on the train if I hadn’t been able to use Google Translate.

For about the first half of my journey, my compartment mates were Russians who spoke minimal to no English. Fortunately, I had thought ahead and downloaded the offline version of Russian in my Google Translate app on my phone while I still had cell service.

Normally, Google Translate requires WiFi or access to a network, but you can download individual languages for offline translation later.

Read more:How you can use the Google Translate app to translate languages offline 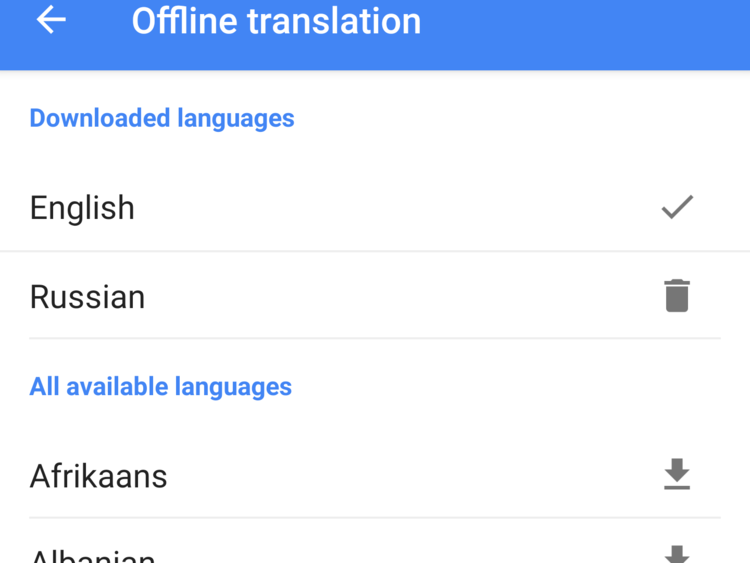 You can download individual languages onto the Google Translate app when you have an internet connection and translate words and phrases later without cell service or Wi-Fi.Katie Warren/Business Insider

Although it was a little awkward passing my phone back and forth and waiting for the other person to speak or type into it, it definitely beat sitting there in complete silence or trying to communicate through hand gestures. I was able to chat with my traveling companions and ask the train attendant questions when I needed to.

Whether you’re riding the train alone or with a friend who speaks your language, I’d recommend downloading the offline translation for Russian. You never know when you’ll need to ask the train attendant a question, and it’ll be much more fun if you can make some small talk with your fellow passengers who might not speak English.