“It is definitely hard because there’s moments when I do feel weak and I do feel not strong and I want to post something that’s maybe a little mean to my ex or a little jab.”

Jana Kramer has been very open about the ups and downs of her marriage to now ex-husband Mike Caussin, in addition to their nasty split and divorce process, but she now admits there are “so many things” she regrets saying publicly.

While appearing on the latest episode of “Better Together with Maria Menounos,” the actress — whose divorce from Caussin was finalized last month — took a look back on her decisions to be so candid about certain parts of her personal life, including previously discussing Caussin’s history with infidelity.

She added, “… It’s one of those things where it’s like there’s so many things that I wish I could take back and when it’s already out there, [the] press has picked it up or this, you’re like, ‘Ah I would have not said it like that!'”

“There’s a lot of things I regret saying,” Kramer said with a laugh. “[I’m] straight up open about that.”

The “One Tree Hill” star — who filed for divorce from Caussin back in April — said that while she wants to continue to be “open” and “honest” about her personal life, she has to think about her and Caussin’s kids — son Jace, 2, and daughter, Jolie, 5, — noting that they are her “number one focus.”

Kramer went on to share how she “change[d] the narrative” during her marriage to Caussin and explained how she’s doing it again now.

“That’s honestly the reason why I started talking about the infidelity piece of my marriage was because I wanted to change the narrative,” she said. “I’m like, ‘My ex didn’t understand.’ I was like, ‘People will write about the fact that you cheated on me in every article, so let’s change the narrative’ and be like, ‘Hey but this is how we survived it and this is how we got through it.’ I mean obviously, it didn’t end up [with that] positive tone.”

“Now I’m like, ‘Okay let’s change the narrative [to] how I’m stronger and how I’ve been able to walk through it,'” she continued. “But it is definitely hard because there’s moments when I do feel weak and I do feel not strong and I want to post something that’s maybe a little mean to my ex or a little jab.” 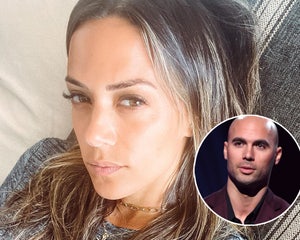 Jana Kramer Questions Why Mike Caussin Has 'So Much Resentment'

The country singer went on to open up more about how she’s doing following her split from Caussin. When Menounos — who recently shot a Lifetime Christmas film with Kramer — asked her co-star about how she gets through the more painful moments, Kramer said, “Honestly, I just, I will let the emotion run its course.”

“My best friend, who is also my day-to-day manager, she’s in the room with us right now, but I’ll never forget, it was about a month ago in LA where I had a feeling come up and it was, ‘I miss my ex’ and I wanted to text him and bring it all back up,” Kramer recalled. “I started crying underneath my sunglasses and I was about to text him and instead, I was like, ‘Alright I’m not going to do this. I’m just going to pretend I’m not crying,’ but instead, I said, ‘Hey Kat, I’m really struggling right now.’ And then she’s like, ‘What’s wrong?’ and then I just started bawling.'”

“Once I finished bawling my eyes out, I didn’t want to text him again,” Kramer explained. “I was okay but it was just I think having those emotions when they come in, those triggers or those moments, feel them and let them out because holding them in I think has hurt me in the long run.”

The podcast episode came a little over two weeks after Kramer and Caussin’s divorce was finalized. On July 22, Kramer took to Instagram, sharing a photo of herself “reflecting” on set and opened up about the many conflicting thoughts going through her mind now that the divorce was a done deal.

“Today has not been easy and I didn’t know if I would even say anything. If I’m honest I had no idea how I would feel. Relieved? Sad?” she began. “But I got the ‘final’ call that I’m officially divorced and the tears came.”

“My first feeling was failure. That I failed my kids. That I was unlovable, not enough,” she continued. “I had moments of anger that I never wanted this for my reality, for my kids. Let’s just say it was all the feels but here’s what I know … I didn’t fail my kids. I’m showing them a strong momma and I’ll continue to do that and walk away knowing I did everything I could.”

She concluded: “This isn’t the end … it’s just the beginning of my story and I’m excited, hopeful, and ready to continue the healing so I can be stronger, and love deeper. Okay back to work. Love you all! We got this!”

Kramer filed for divorce from Caussin in April after nearly six years of marriage. The former couple was open in the past about Caussin’s repeated infidelity. In the divorce docs, obtained by E!, Kramer cited “inappropriate marital conduct, irreconcilable differences and adultery” as cause for the divorce. Caussin hasn’t yet made any comment on the split.