The Blindspotting star talks stepping into her own power and recording her next album. 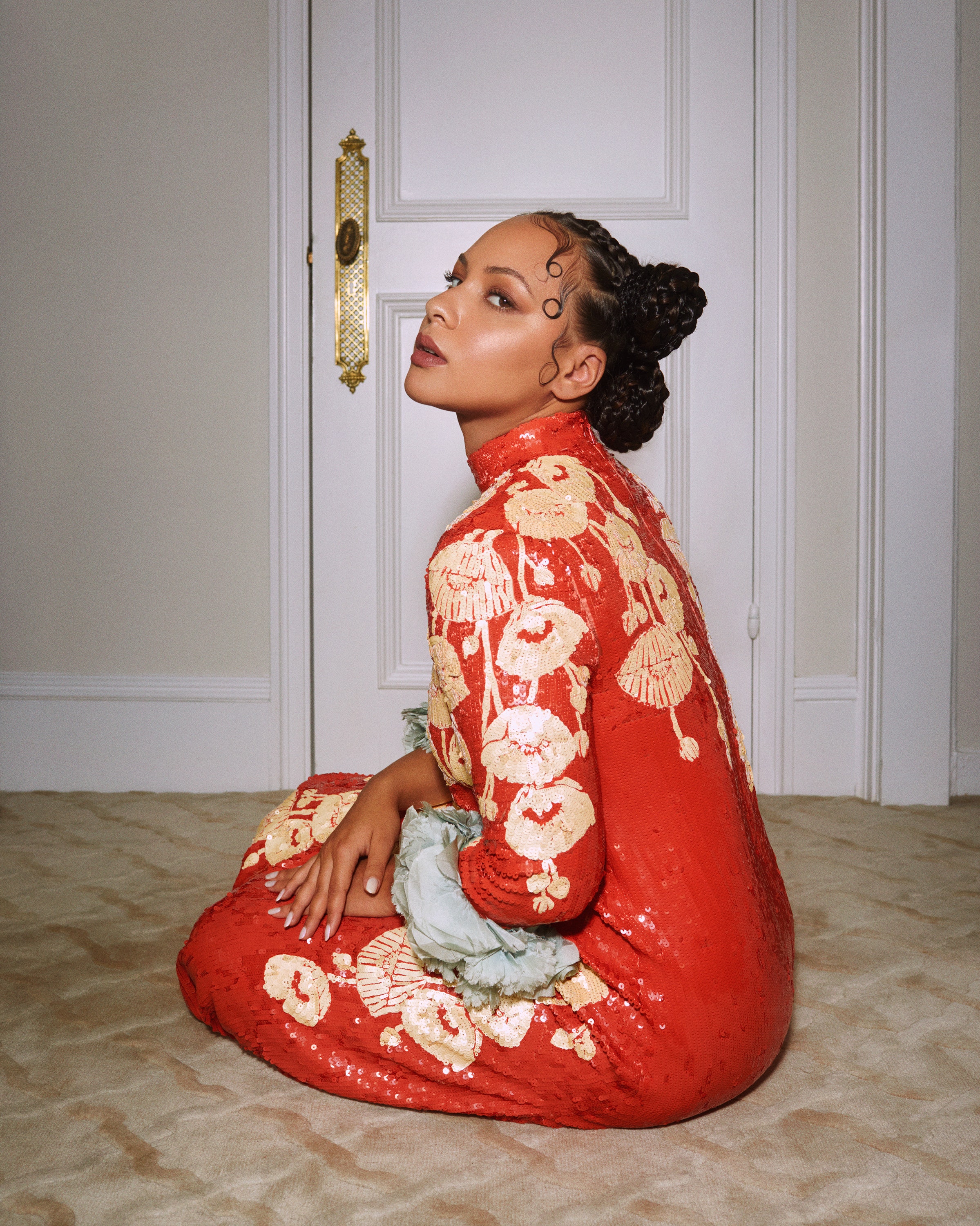 When Jasmine Cephas Jones arrives at the door of a Park Slope café on a gloomy, humid day in July, she brings with her an unexpected accessory: a cast boot for her foot. The actress had fractured her foot a few weeks earlier, while walking on stage at the Tribeca Film Festival premiere of Blindspotting, the Oakland-set drama series she leads. “I have been doing a lot,” she says with a laugh when she sits down across from me, latte in hand. “But I’m home now, and I finally feel grounded.”

Jones’s respite would be a short one—later that week, just after her birthday on July 21, the actress and musician would head out to a remote corner of the Hamptons to record her next album in a makeshift studio. She tells me she wanted to approach the making of the album the way musicians did back in the day, by finding a remote location, gathering up all of their friends and collaborators, and jamming out. “This is my project,” she says. “I don’t have to answer to anybody.”

Born in London and raised in Brooklyn, Jones spent her teen years working as a camp counselor in New York; when she’d travel to the English countryside to visit her mother’s family at summer’s end, she had some extra spending money. “I got two completely different worlds growing up,” she says. “In [the Brooklyn neighborhood of] Ditmas, there are all these beautiful Victorian houses, so we used to call the neighborhood Narnia—when it snowed it was like, Aslan could come out of somewhere.” The actress also grew up surrounded by the arts (her mom is British musician Kim Lesley and her dad is This Is Us actor Ron Cephas Jones), but didn’t always see it as a viable career. “Both of my parents are artists, so I knew how hard it was. I didn’t have glass over my eyes,” she adds.

The actress has spent the better part of the decade performing in large-scale projects: the new series Blindspotting, of course, but also on Broadway in Lin-Manuel Miranda’s Hamilton (where she, coincidentally, met her fiancé and co-star Anthony Ramos), and various roles on television series like Mrs. Fletcher, plus an Emmy-winning turn on short form series #FreeRayshawn. So it might be hard to believe that Jones was ever a shy kid—but she says she suffered from stage fright as a student at New York City’s famed Fiorello H. LaGuardia High School. In fact, she still gets the jitters, she confessed, telling me that if I look closely enough at her performance of “America the Beautiful” with her Hamilton cast mates at the 2017 Super Bowl, I’d see her arms and legs trembling.

Today, though, Jones seems relaxed and self-assured. That confidence comes, in part, because of the character she plays on Starz’s Blindspotting: a young mother named Ashley whose fiancé and father of her child has just been jailed for drug charges. There is a particular scene in the show Jones mentions hit home for her, in which the full extent of Ashley’s unbridled inner rage is revealed. After receiving inappropriate comments from a guest at the hotel where she works at the front desk, Ashley manages to make her way into his hotel room, grab a tennis racket, and smash everything to smithereens. “It’s a moment of understanding, what a woman of color feels like in a workplace all the time,” she says. “This feeling of ‘I can’t say what I want to say because I’ll either get fired or I’ll be called a bitch or be misunderstood.’ It’s such a symbol of our fire and emotion boiling up. I thought it was such an artistic way that I’ve never seen done on TV before.”

Jones was part of the earlier iteration of Blindspotting, a movie created by Rafael Casal and Daveed Diggs (another Hamilton alum). When Casal and Diggs offered her to reprise her role for the spin-off series, but with the character of Ashley at the forefront, Jones couldn’t say no to their ambitious experiment. It would require her to break the fourth wall as Ashley and recite heightened verse, but she couldn’t pass up the chance to show her range.

But her performance on Blindspotting did not come without its challenges. The London-born, Brooklyn-based actress worked hard to nail the musicality of the Bay Area accent and make things feel authentic, in case anyone from Oakland might notice something inaccurate about her character’s inflections. “It definitely helps when you have Rafael and Diggs on your shoulders making sure you’re as Bay as possible,” she says with a laugh.

There was also the fact that, while she did sing on stage in Hamilton, Jones did not necessarily know how to rap—as Ashley, she needed to perform hybrid spoken word, heightened verse monologues that would require some of that skill. “I didn’t want it to feel like a performance, I wanted it to flow with everything. There are so many layers of it that could set you up to fail if you don’t know what you’re doing,” Jones says before taking a pause to reflect on how she made it work on screen. “I approached it like a Shakespeare monologue and completely broke it down, so when you see Ashley do the heightened verse, she is literally thinking about the next thing that she’s going to say. She’s opening a part of herself, sharing how she truly feels, to the audience, and you can see that she doesn’t know everything she’s about to say, she’s realizing what she’s saying as she’s saying it. That was the most challenging.”

Before we finish up our coffees, Jones reflects some more on the whirlwind summer she’s had so far, between fracturing her foot, celebrating the release of her new TV series, and gearing up for her next project. Her album, she says, “has the underlying theme of stepping into your own power, and not apologizing for it.” It will differ from her first EP, which was called Blue Bird, and came from what the performer called a “very sad place” despite being hopeful. “With this album, I’m keeping my channel open,” she says, a reference to a letter written by choreographer Martha Graham to Agnes De Mille. “I read it all the time when I’m feeling crazy,” she adds before cracking a big smile and laughing out loud.

The theme of stepping into her own power also extends to her acting career, she suggests, adding that she has been writing and gathering source material to adapt for the screen or the stage. “I’m behind the scenes creating roles that I would love to play that are complicated and fierce,” she adds. “I know what I don’t want to do anymore: I don’t want to just be a prop to a man in a story. The options are endless, and whatever the next thing is, I want to keep challenging myself.”