NEW YORK ― Jerhonda Pace, 28, paused to catch her breath and take a sip of water while she was on the stand testifying against R. Kelly in a Brooklyn federal court on Wednesday. She was the first witness, referred to in the case as Jane Doe No. 4, of the trial to describe alleged abuse from the R&B singer.

Her testimony included graphic details of her relationship with Kelly, which started when she was 16 and he was in his early 40s. She was a virgin when they met, she testified. She said he told her he wanted to train her to please him, made her call him “Daddy,” demanded she ask for permission for anything while spending time at his house in Olympia Fields, a suburb of Chicago, and punished her when she didn’t follow his orders. She also testified that he knowingly had unprotected sexual intercourse with her without telling her he had herpes.

Pace, who is pregnant and due “any day now,” had been mostly composed while answering Assistant U.S. Attorney Elizabeth Geddes’s questions about the violence she said she’d faced. But her pain reverberated around the courtroom as she choked up and then gathered herself as she spoke of her last day at Kelly’s house after months of what she described as sexual and physical abuse.

On this day in 2010, distracted by her phone, she said, she failed to acknowledge him when he walked into a room she was in, so he then slapped her and choked her until she passed out.

“I remember him putting his hand around my neck,” she said. “He spit in my face and told me to put my head down in shame.”

He then forced her to perform sexual acts on him, she testified. He told her that he wanted to have sex with her in a specific pair of heels, but Pace told him they were at her uncle’s house in the same neighborhood and asked for permission to go get them, she testified. When she left, she said, instead of going to retrieve the shoes, she made her escape. 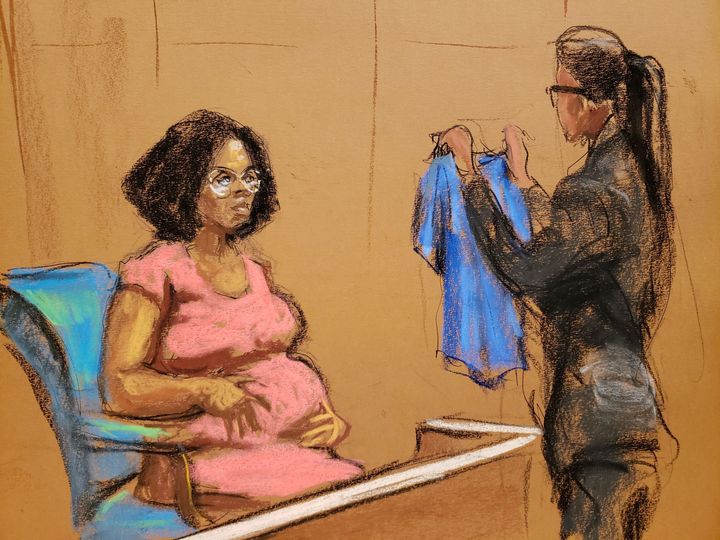 The much-anticipated trial — delayed nearly two years in part due to the coronavirus pandemic — finally started Wednesday in the Brooklyn federal courthouse in New York City, with opening statements from prosecutors and the defense attorneys discussing the racketeering and trafficking charges against Kelly. Assistant U.S. Attorney Maria Cruz Melendez and defense attorney Nicole Blank Becker spoke for the majority of the day before Pace was called to testify.

“This case is about a predator,” Melendez told the jury of seven men and five women. “A man who, for decades, used his fame, popularity and network of people at his disposal to target, groom and exploit young girls, boys and women for his own sexual gratification.”

Melendez spent roughly an hour outlining the crimes Kelly is accused of, arguing that the R&B singer “sexually, physically and psychologically” abused several young women and minors. “He began collecting girls and women as if they were things… hoarding them like objects that he could use however he liked,” the prosecutor said.

She said that Kelly had a group of people “all at his disposal,” including bodyguards, accountants and assistants, whom he relied on to help him facilitate and cover up crimes for nearly 30 years.

Melendez’s presentation was strong and concise, a stark contrast to Becker’s opening statement. Becker, the only woman on Kelly’s legal team, delivered an opening statement that was incoherent and confusing and lasted more than two hours. Her arguments at times elicited derisive laughs from reporters and members of the public who sat in an overflow room while the trial was broadcast. (The public and the media were not allowed in the courtroom due to social distancing measures.) Many appeared dumbfounded by Becker’s inability to string a coherent sentence together.

Becker called the Jane Does in the case “girls” instead of “women” at least six times, correcting herself every time. She made the mistake so often that it only reinforced the prosecutors’ argument that Kelly’s alleged victims were minors, not adults.

Becker, who is a former assistant Wayne County prosecutor in Detroit, at one point urged the jury to find Kelly guilty before she quickly corrected herself, adding that she hoped the jurors would find her client not guilty.

At one point, she named Pace instead of referring to her as Jane Doe. Pace had already been named in public and was later named by prosecutors, so it was not a huge error, but it did illustrate the sloppiness of Becker’s presentation.

U.S. District Judge Ann Donnelly warned Becker multiple times to stay on course and respond only to what Becker expected prosecutors to present as evidence. The judge also sustained multiple objections from prosecutors during Becker’s statement.

Kelly’s attorneys showcased their main defense in opening statements: These women consented to sex and became upset when Kelly broke off the relationships, Becker argued.

“These were individuals who knew what they were getting into,” Becker said of the alleged victims in the case, later adding: “What we have described is a number of women who are out for revenge.”

Becker said the sexual interactions Kelly had with the women, many of whom were minors at the time, were “consenting relationships.”

“Hell hath no fury like a woman scorned,” Becker said when explaining why Jane Doe No. 6 accused Kelly of sexual and physical abuse. She warned jurors that many victims are likely to lie on the stand.

Becker also acknowledged two John Does, neither of whom are cited in the indictment but are listed in the uncharged evidence. The first John Doe says that Kelly sexually abused him when he was 17 years old in 2006.

“The topic of his sexual preference — it’s window dressing and he hopes you  see through that,” Becker said to the jurors.

Witness testimony will continue throughout the week. The trial is expected to last at least a month.