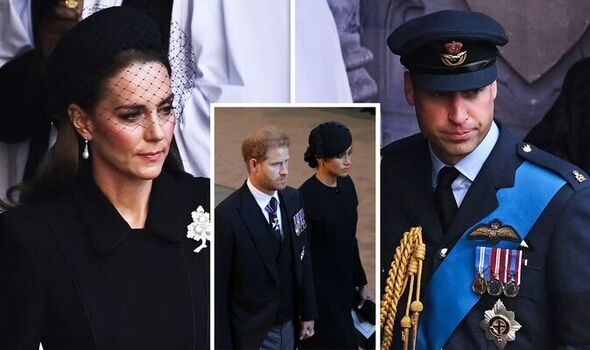 The world saw Prince William and Prince Harry reunite for Queen Elizabeth’s funeral, and when they attended the lying-in-state ceremony at Westminster Hall for their grandmother, there were clear differences between the two brothers and their wives, a body language expert has suggested.

Pictures from the event showed William and Kate, Princess of Wales, walking in front of Harry and Meghan Markle toward the exit.

Body language expert and connection specialist Katia Loisel analysed the images of the couples walking out of Westminster Hall and noted the differences.

As members of the Royal Family filed out in twos, Harry and Meghan turned to one another and held hands for the last few metres.

Throughout the service, the expert said the Duke was blinking fast, had his head lowered and shifted his weight from foot to foot resulting in a swaying motion. He also used pacifying gestures; licking his lips and swallowing, which Katia said indicated he was “in distress”.

But holding hands with Meghan “correlated with a reduction in stress levels” for Harry, Katia suggested.

Prince William and Kate, however, did not connect physically with one another, and Katia said “it was evident” the husband and wife felt “highly distressed”.

She noted their “slightly lowered heads” and how they used “protective arm barriers”. The couple also displayed “furrowed brows” and “tension in the neck and mouth”.

Images show the Prince and Princess of Wales with “tightly compressed lips” which Katia suggested was a sign of them “trying to hold it all in”.

Compressed lips are also said to be “reliable indicators of negative emotion,” and the more pronounced the compression, as was the case for William, the higher the levels of “discomfort and stress” the expert added.

For most of the ceremony, Katia said William and Kate tried to maintain a “poker face” to “mask their pain”.

She said Kate looked to be “on the verge of tears”, but she would blink rapidly and swallow which suggested she was trying not to cry.

The expert also spotted Kate’s eyes focusing on the floor in front of her as she walked, and her head was down. Her face reportedly lacked muscle tone, and her lips were compressed similarly to William’s.

Another image shows the four royals exiting the Hall; William had his head down, Kate was slightly behind him, and Harry and Meghan are looking at one another.

Katia said this was an “interesting” photo from a “nonverbal perspective” as it “highlighted the differences between the two couples”.

These, as well as “mutual gaze” showed the couple offering each other “support and reassurance”.

Harry and Meghan’s body language “contrasted” William and Kate who “kept with the formality and seriousness of the event”.

The Prince and Princess of Wales were said to be “lost in their own thoughts” and kept a formal distance from each other, Katia previously told 7News.