Member of the royal family have changed the display photographs on their Instagram and Twitter accounts ahead of Remembrance Day.

Prince William, 38, and Kate Middleton, 38, had been using a profile image as they joining a Clap for Carers effort alongside Prince George, seven, Princess Charlotte, five, and Prince Louis, two, during the Covid-19 crisis.

But in recent days, the Duke and Duchess have swapped the photograph for one showing them laying a wreath of poppies during a visit to Manchester in 2016.

It comes as members of the Royal Family prepare to attend the Cenotaph to lay wreaths to remember the fallen in a Remembrance Day event which has been scaled down due to coronavirus. 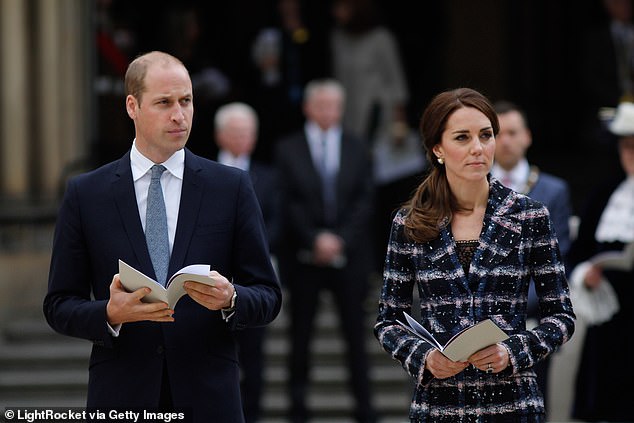 Members of the royal family, including the Duke and Duchess of Cambridge, both 38, have changed the display photographs on their Instagram and Twitter accounts ahead of Remembrance Day 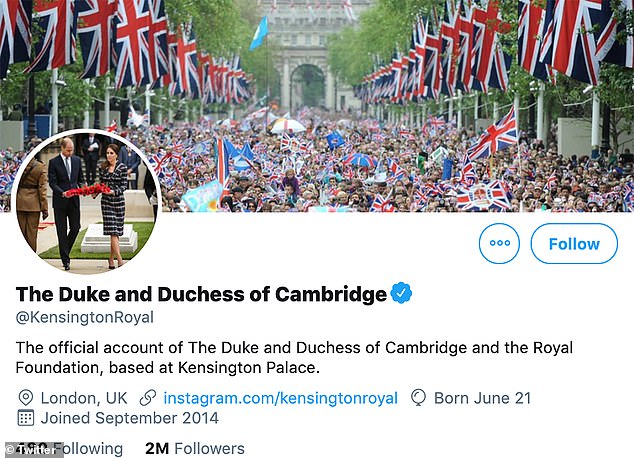 Prince William and Kate Middleton have swapped the photograph for one showing them laying a wreath of poppies during a visit to Manchester in 2016.

Meanwhile the Royal Family accounts, which gives updates on the Queen, 94, as well as other members of family, changed their profile photos to show the monarch at Westminster Abbey’s Field of Remembrance in November 2004.

Prince Charles and Camilla, Duchess of Cornwall also changed their photograph for one from 2009, when they spent Remembrance Day in Canada.

It is expected that Prince Charles, Prince William and Princess Anne will lay wreaths while the Queen, Kate and Camilla will line up on the Foreign Office balcony.

The traditional 11am service in London which is usually attended by thousands of people lining the streets will this year only allow a limited number of people to attend. 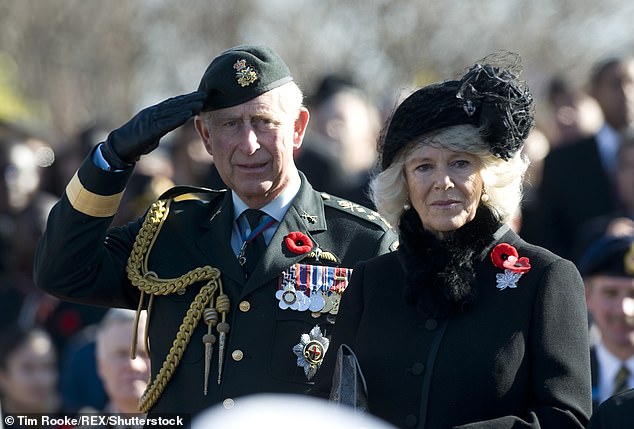 Prince Charles and Camilla, Duchess of Cornwall also changed their photograph for one from 2009, when they spent Remembrance Day in Canada 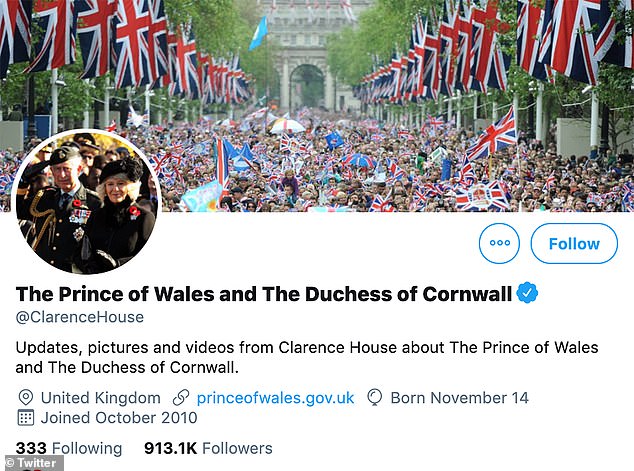 But the legion’s previous hopes to still be able to hold the service with the famous military march with restrictive measures, have been dashed.

Some veterans will be invited to attend the service, which will be made Covid-secure.

A century of Cenotaph

The Cenotaph was designed by Sir Edward Lutyens and this year is the 100th birthday of the monument.

It replaced an earlier wood-and-plaster structure that had been out up at the end of WWI.

It is the site of the annual National Service of Rembrance, held at 11am on the nearest Sunday to November 11.

It usually sees thousands of members of the public mass in London to pay their respects to heroes felled defending freedom.

It will be the first time in the Cenotaph’s 100-year history when the poignant tribute to all those who’ve died in war will be closed off.

Other services across the country are also being scaled back, in light of the second wave of the pandemic.

Around 10,000 people usually gather at the Cenotaph each year for the National Service of Remembrance and the two minute silence at 11 AM.

This year, for the first time in history, the event will be closed to members of the public in line with the latest expert medical and scientific advice.

The Government has urged the public to remember all those who paid the ultimate sacrifice by coming together for a national moment of silence at 11am as the service is broadcast nationwide on BBC One, Sky and ITV.

Advice has been provided for councils in England on how to ensure that those hosting local Remembrance events can do so safely.

Measures include reducing numbers, focusing attendance on those wishing to lay wreaths, and observing social distancing at all times.

All gatherings involving more than 6 people will need to be organised by a business, a charitable, benevolent or philanthropic institution or a public body, the Government has said.

Culture Secretary Oliver Dowden said: ‘This Remembrance Sunday has a particular significance as it marks one hundred years since the Cenotaph was installed. 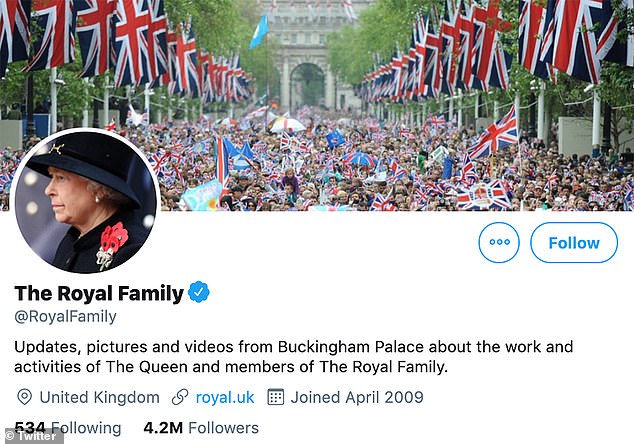 Meanwhile the Royal Family social media accounts, which shares news about the Queen, 94, and  other members of The Firm, changed its profile picture to show the monarch at a service

‘Whilst we will mark this occasion properly, it is with a heavy heart that I must ask people not to attend the ceremony at the Cenotaph this year in order to keep veterans and the public safe.

‘We will ensure our plans for the day are a fitting tribute to those who paid the ultimate sacrifice and that our veterans are at the heart of the service – with the nation able to watch safely from home.’

The Queen is said to have been determined to be at the service and said she would return ‘come hell or high water’. 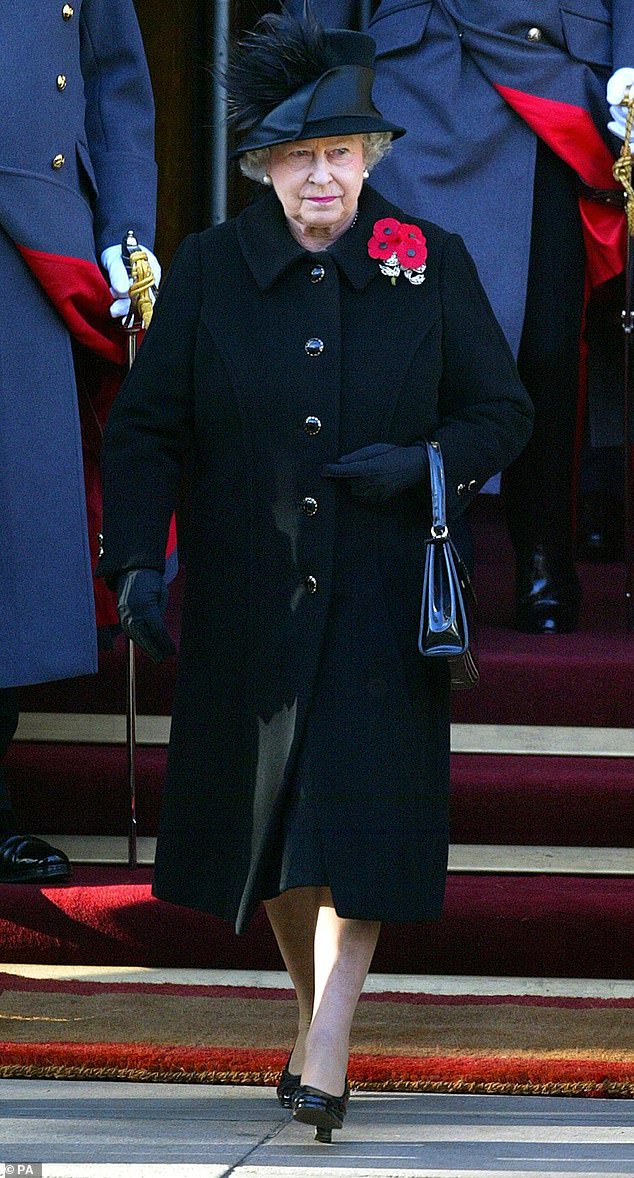 During the pandemic she had been unable to take part in events such as Trooping the Colour, and Maundy Thursday, along with Palace garden parties.

She continued to hold weekly calls with the Prime Minister, and did hold a socially-distance birthday party.

Her Majesty also stepped out to give NHS fundraising hero Captain Tom Moore a knighthood, and to attend Princess Beatrice’s wedding.