Labor has gone further than the Coalition's so-called bonk ban by banning all MPs from conducting sexual relationships with their staff.

Malcolm Turnbull's rule prohibited ministers, but not backbenchers, from sleeping with their staff, but Labor leader Anthony Albanese said the opposition's policy covered all MPs. 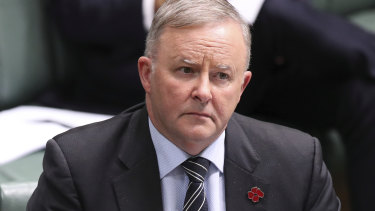 Labor leader Anthony Albanese says the party will ban all MPs from engaging in sexual relationships with staff.Credit:Alex Ellinghausen

This is a significant departure from the promise Bill Shorten made when opposition leader that he would not cancel the ban if elected as prime minister.

"Labor believes that workplaces must be safe places, whether in MPs offices or any other workplaces," the Opposition Leader told The Sydney Morning Herald and The Age.

Mr Albanese's chief of staff, Tim Gartrell, held a meeting with all staff on Tuesday to tell them that any complaints about MPs' behaviour would be taken seriously.

"Tim outlined how Labor wants a safe work environment for all staffers- particularly women, the doors are always open for support and confidentiality will always be protected," said a source who attended the meeting.

Labor's toughened stance came after former Liberal staffer Rachelle Miller revealed that she had lodged a formal complaint about the way she was treated by the government following her brief affair with minister Alan Tudge in 2017.

The pair, who were both married at the time but had since separated from their spouses, saw each other for six months while she worked in his office.

After that, she says she was moved to another office and subsequently demoted. She has alleged to the Department of Finance that Mr Tudge engaged in workplace bullying saying he would humiliate and belittle her.

Mr Tudge responded to the Four Corners report by expressing regret at the hurt he caused his family and Ms Miller, but he did not respond in detail to the bullying claims when The Sydney Morning Herald and The Age on Tuesday sent him extracts from the formal complaint.

The minister's spokesman said Mr Tudge had only learned of the complaint from the media and was not aware of any previous complaint.

"As appropriate, the Minister anticipates that the Department of Finance would conduct an independent inquiry into this matter," the spokesman said.

"Any further enquiries should be directed to the Department of Finance.”

Mr Porter categorically rejects the "depiction" of the incident, and says that the young woman has also rejected it.

Mr Turnbull told the program that the reports of Mr Tudge and Mr Porter's behaviour, combined with Barnaby Joyce's affair with his then staffer Vikki Campion, prompted his "bonk ban".

Joyce, who quit the frontbench because of the scandal, now has two children with Campion and opposes the ban on sexual relationships between ministers and staff.

The ban introduced into the Ministerial Code of Conduct that ministers refrain from conducting sexual relationships with their staff. Relationships with staff working in other MPs offices are permitted.

On Tuesday, Prime Minister Scott Morrison challenged Labor and the Greens to impose their own ban, but did not commit to extending it from ministers to backbenchers.

He said the issues raised about Mr Tudge and Mr Porter predated his elevation to the leadership and were dealt with by Mr Turnbull.