Last year I separated, turned 50 and bought a ute. All are unrelated, yet came as a sort of job lot of midlife crises that in some cosmic way has reshaped masculinity. Life upended, I’m getting old, I have a ute. Previously, I’d only ever owned one car. I’m that bloke, on the bike. I’ve dinked our little boy to and from school through the first years of his education – he rides side-saddle on the crossbar in all weathers, between my arms, bell-ringing when required, and I wish for it never to end. It’s our happy place. Free-spirited, talk loosened by the shared movement.

Years ago, I bought a bicycle at a garage sale in Point Piper, a Sydney harbourside knob for the outrageously wealthy. It was a good bike – sold by the scion of a construction magnate to help fund a ski jaunt – barely used, though a size too small (as, unfortunately, were all his shoes). But with the seat post fully extended, his two wheels got me everywhere. Since about then I’ve avoided car ownership, despite its place in the Australian way of life and how it might confer a type of manhood. What’s under the hood and all that. 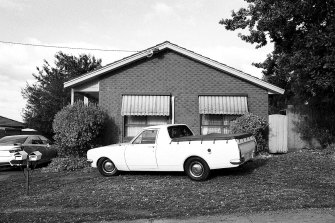 I expect no second looks, and even less sex in the back seat (it’s too cramped, anyway, with the child booster seat).Credit:Stocksy

Only the US, among comparable nations, has higher vehicle ownership rates than Australia’s 717 per 1000 licensed drivers. We’re a country of petrol heads. Our car-building industry has closed yet we buy more vehicles per capita than the great car-producing nations of Italy (679 per 1000), Japan (591), France (578), Germany (572), Sweden (520) and the UK (519). When Darryl Kerrigan in The Castle asks Steve to move the Camira – “I need to get the Torana out so I can get to the Commodore” – the humour is in part for a very real side-drive juggle.

I appreciate the romance of the road, of cars, their meaning and metaphor, but their secret language is largely lost on me. Unlike my closest friend and my former father-in-law – a random survey of two – both of whom own vintage Jaguars. Theirs is a sort of private men’s club; the knowing, the automotive heritage, the sinuous body, the British racing green, pistons and valves, all that chrome trim and cowhide interior, rubbed and polished with a tenderness some men might find only in a garage. But an anchor point for the child seat?

Beautiful cars, yep, but only really suitable for a weekend tour in the countryside. A “chick magnet” for a man of a certain age, and deportment. A sort of motoring Viagra. I’ve heard it said cars are bought for one of only two reasons: status and/or convenience. The assumption is that consumer decisions are based on rational choices. Yet where’s the logic to a 1973 Reliant Regal, Mr Bean’s car, a three-wheeled runabout known otherwise for its tendency to tip over on roundabouts? Or a Hummer. There’s no excuse for a Hummer.

The one car I owned previously was a 1976 cosmic-green Peugeot 504, bought in my mid-20s from a young family in the middling Melbourne suburb of Box Hill. They were upgrading. It cost $3500. I drove it all around Melbourne and Sydney and beyond. 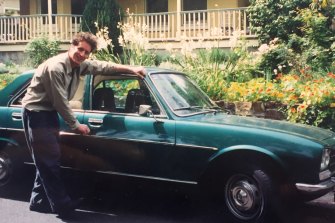 Dugald Jellie and with his previous car, a 1976 cosmic-green Peugeot 504.

I remember that car with the deep fondness a man might reserve for a first girlfriend. It spoke to me. Whispered a lullaby on the open road, offered a chant when feeling poorly, a little warning groan, a sigh when in need of servicing. Once, when driving from one side of the Pilliga Scrub in north-central NSW to the other, the driver’s door rattled loose on dirt corrugations, then came off entirely. It travelled the rest of the way in the boot. Now all these years later, I’ve bought my second car. A utility. It’s nothing fancy – a knockabout workhorse, honest, pragmatic, utilitarian, plenty of ks on the clock, with a grey vinyl interior and manual windows that have my boys perplexed (“that’s a good idea,” exclaimed one of their friends).

But with the gift of its tray – gloriously wide, flat, with drop-down sides – it’s perfect. Already, it’s hauled bricks, timber, sand, tools, scooters, bicycles, cricket bags, and a few of the hopes for this next part of my life.

Hardly a midlife crisis, it’s more a car as contraceptive. I’ve become the invisible man in the milky white work ute. I expect no second looks, and even less sex in the back seat (it’s too cramped anyway, with the child booster seat). Besides, I’ve named her Dorothy. She’s come into my life at a time of great upheaval and turmoil, swept me off my feet, and she’ll take me on an adventure, I know it, picking up things along the way, stopping to look and gather, in the slow lane, as happy as a clam.

To read more from Sunday Life magazine, visit our page at The Sydney Morning Herald, The Age and Brisbane Times.