The husband of late Emmerdale star Leah Bracknell has said he feels his wife’s spirit is still alive and she has simply moved to ‘another realm’ in an interview to mark the year after her death.

Emmerdale star Leah Bracknell lost her battle with stage 4 lung cancer in September 2019 at the age of just 55, three years after her devastating diagnosis.

During an interview on ITV’s Loose Women today, her husband, Jez Hughes, 46, suggested the couple have a long distance relationship because she resides in another Shaman world.

He said: ‘Her spirit is as alive now as ever…She is in a different world. We did long distance previously. Now it’s more distant but that isn’t to say death is a defining end. I understand that we move onto different realms and places.’ 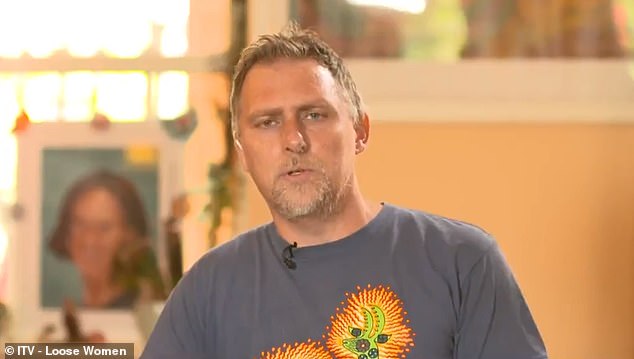 The husband of late Emmerdale star Leah Bracknell, Jez Hughes, 46, has said he feels his wife’s spirit is still alive and she has simply moved to ‘another realm’ in an interview  with Loose Women to mark the year after her death

Leah, who also had roles in A Touch of Frost, The Royal Today and DCI Banks, was diagnosed in September 2016 after rapid weight gain around her abdomen and breathlessness prompted her to seek medical help.

While undergoing treatment, the media personality married her long-term partner Jez in a quiet ceremony at a grade II listed Georgian building in Horsham, West Sussex.

She went on to die three years later after losing her battle with the lung cancer.

Speaking today, a week after the anniversary of her death, Jez said he felt ‘deep sorrow and pain’ when she passed away: ‘Grief is like a monster who brings along a lot of their mates like anger and pain. It’s like being physically assaulted, the pain.’ 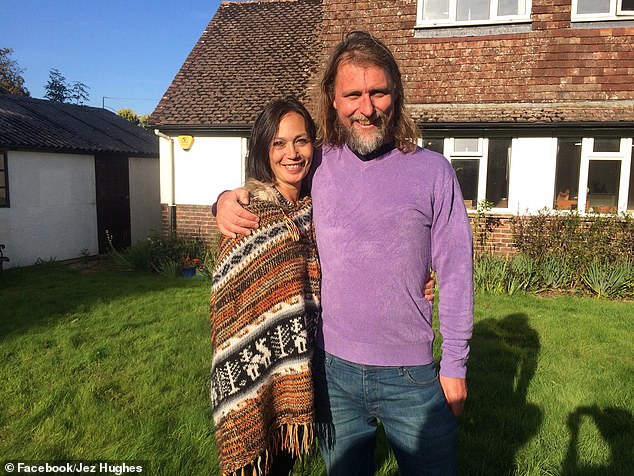 Emmerdale star Leah Bracknell lost her battle with stage 4 lung cancer in September 2019 at the age of just 55, three years after her devastating diagnosis

He said with time the pain he experienced got a little easier to deal with, explaining: ‘The places in between the grief get longer. You feel normal and laugh and smile, living life again which brings up other stuff like guilt.

‘It can just hit you suddenly, going from completely normal and then it just hits you.

‘Over time you go back to a sense of normality so when you’re sucked back into the grief it’s almost harder.’

He continued: ‘Grief is about finding beauty, life can be cruel and cancer is cruel. Being on a grief journey is finding the beauty within that.

‘I think that’s what Allie did in facing cancer, she found beauty and laughter and love.’ 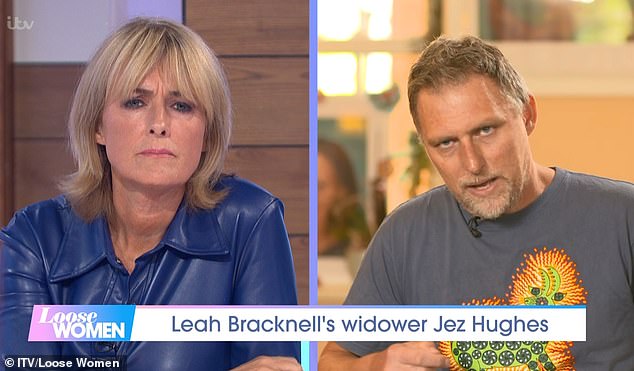 Jez, who is a Sharman, told the panel on Loose Women that he felt her spirit was ‘as alive as ever’

He also revealed he watches old episodes of the soap to feel connected to his wife, saying: ‘It helps me connect with her. Yes that is before I knew her but obviously it meant so much to her.

‘It feels important to connect with that part of her. There’s moments, if there’s an emotional scene in the programme I know those moments, I know those facial expressions, that touches somewhere deep inside me.’

Before her death, Leah described how she had an ‘attitude of gratitude’ during her cancer battle.

She was often vocal about her cancer treatment, sharing her experiences in a blog and through interviews.

In the months leading up to her death she wrote ‘The Cancer Rebel’s Manifesto for Life’ to ‘reject the notion of being a victim’.

In her final interview in August 2019, she said that she wouldn’t ‘let herself live in fear’ adding that she was ‘just going to have a good life.’ 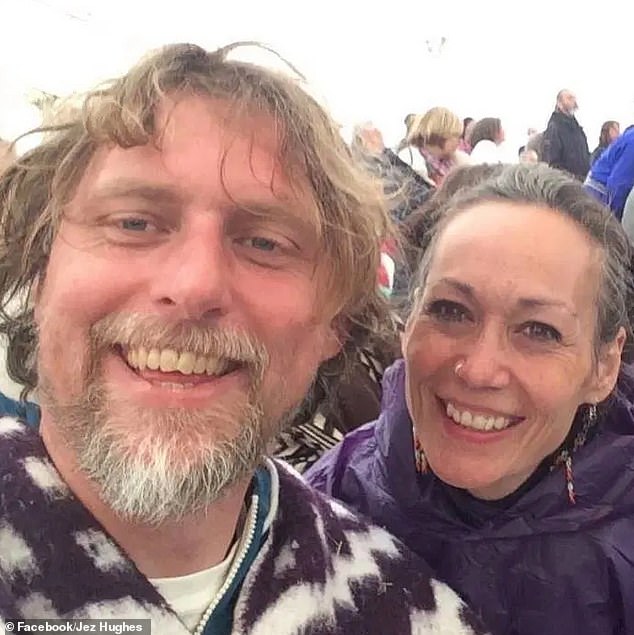 During an interview on Loose Women today, a week after the anniversary of Leah’s death, Jez said he felt ‘deep sorrow and pain’ when she passed away, comparing it to being physically assaulted 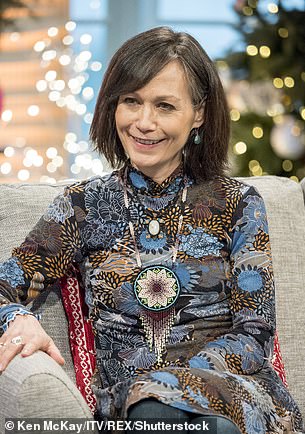 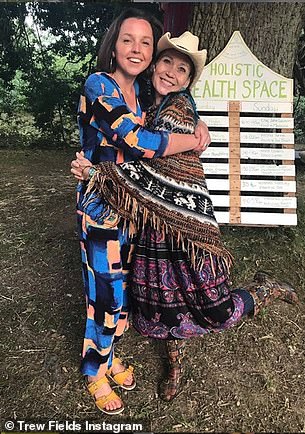 Tragic: Lea was diagnosed in September 2016 after rapid weight gain around her abdomen and breathlessness prompted her to seek medical help (left in 2017, right earlier this year)

She said: ‘I don’t need to go and fulfil a bucket list, that’s not my style, I just want to do the things I want to do while I am healthy and strong.

‘I won’t let myself live in fear, I’m just going to live a good life.’

Speaking about her willingness to speak candidly about her diagnosis, Jez said: ‘That was real, it wasn’t put on for the telly, that’s how she approached cancer and then diagnosis when we were told there’s nothing they could do.

‘Everytime she faced that wall she expanded. That bravery to look mortality in the face. She made choices to rise above.

‘She wanted to be defined by her responses – not her diagnosis or treatment or how long she lived for. She was incredible. She never moaned about that.’

The widow, who calls his wife Allie, a nickname derived from her real name Alison, said he feels it is important to connect to the fact he and Leah had a long relationship and she had a long life before cancer. 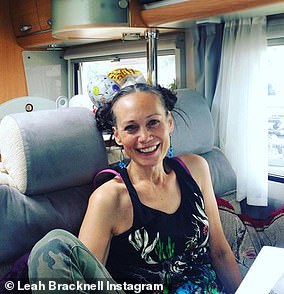 Emotional: Leah Bracknell, 55, has written a moving ‘cancer manifesto’ after she was given a mere few months to live following her terminal lung cancer diagnosis in 2016

Born Alison Rosalind Bracknell on July 12 1964, the multi-talented mother-of-two was also known for her work teaching at the British School of Yoga and for creating her own line of jewellery.

Her father, television director David, first brought her acting career to the screen in The Chiffy Kids series in 1976, before she took her future into her own hands.

Only two years after studying at Webber Douglas Academy of Dramatic Art and aged 25, she was cast in ITV’s Emmerdale, where she made her mark playing British soap’s first lesbian character.

She left the series in 2005 in an episode voted the Best Exit at the British Soap Awards in May 2006.

But that certainly didn’t spell the end of her acting career, appearing in Judge John Deed, Casualty 1907, Doctors and another ITV1 soap, The Royal Today.

She also turned her attention to theatre, starring in both Gaslight and Strangers On A Train.

In October 2016, aged 52, Bracknell revealed she had been diagnosed with terminal lung cancer.

Her battle with cancer came to light when her partner launched a Go Fund Me page to raise money for her to undergo treatment overseas, due to a lack of options available on the NHS.

More than 2,500 fans joined together to raise £50,000 to help pay for cutting-edge treatment for her in Germany.

She thanked everyone involved, adding: ‘I really did not expect or feel deserving of such interest and kindness.’

Talking in February on ITV’s Loose Women she said she had a positive outlook on life and was not fearful despite being diagnosed with terminal lung cancer.

She said she had formed a ‘relationship’ with her cancer to try to understand it.

She revealed she had been diagnosed after rapid weight gain around her abdomen and breathlessness prompted her to seek medical help.

She told Loose Women: ‘I’ve talked before about how my response was one of absolute anger, it’s infuriating – how dare you tell me this – which is why I didn’t want someone to guesstimate what someone thought my prognosis would be.

Bracknell also revealed to the TV panellists that she was taking a new medication she hoped would give her a longer life expectancy.

In August she revealed her cancer treatment has stopped working.

Writing on the appeal page on donations website Gofundme.com, her partner Jez Hughes said it appeared the drug she was using started to fail several months ago, but Bracknell’s aim is still ‘long-term remission’.

He also thanked everyone for their help, writing: ‘These treatments and private consultations aren’t cheap, so we are so very grateful for the opportunity to keep Leah strong and well in this way as we really believe it is working.’

Bracknell appeared on ITV’s Lorraine in December, where she revealed she had been the recipient of pity from some people.

She said: ‘I think I just decided, it’s still my life, but other people were writing me off quicker and even people close to me, they’d come and – I don’t mean to be unkind – but people were embarrassed, or didn’t know what to say.

‘They come in and they’re feeling very sorry and very pitiful, and actually it’s the worst – the one thing that nobody wants is pity.

‘I can’t think that anybody, anywhere wants to be pitied. It’s like all of your power has been taken away, and I’m very much about how can we hold on to our power in order to deal with hospitals, doctors, people who have qualifications – it’s intimidating.

‘How do we retain that so we still have authority over ourselves?’

She added: ‘It’s obviously part of one’s life, whether it’s cancer or another disease or chronic condition, but the point is, it’s life. It’s living.

‘Even when it’s a diagnosis like I had and they literally said there are no options, I am still alive.

‘And I’m not going to embrace anything else, full stop. I’m alive until the point I am not. And that to me is the key, not to surrender to something else.’

She said she does not wake up with a feeling of dread in the morning and that she has pushed aside her worries about the ‘minutiae of life’.

Bracknell, who announced she would be hosting a talk to help other people going through a similar experience, said she appreciates the ‘simple, little things’ in life to help her.

She explained how she likes to hold onto an ‘attitude of gratitude’ with her at all times, even if she has to ‘fake it’.