Australia has hit out at a United Nations move to list the Great Barrier Reef as in danger with the federal government saying it was a flawed process that ignored the government’s successful management plans.

Scientists have backed the announcement overnight by the United Nations Educational, Scientific and Cultural Organisation (UNESCO) – whose member countries control World Heritage listings – saying the government’s lack of action on climate change is to blame. 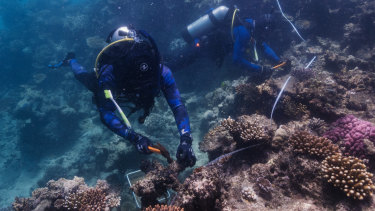 The United Nations has warned of the “danger” facing the Great Barrier Reef.Credit:James Brickwood

The panel is currently chaired by China and its draft “in danger” listing for the Great Barrier Reef’s status could be the first step in a process that sees the multi-billion tourism drawcard and generator of 60,000 jobs removed from the list of World Heritage sites.

Environment Minister Sussan Ley said Australia would challenge the UNESCO decision, and argued the federal and Queensland state governments were investing more than $3 billion to protect the reef’s fisheries and to improve water quality.

“The Great Barrier Reef is the best-managed reef in the world and this draft recommendation has been made without examining the reef first hand, and without the latest information,” said Ms Ley said.

UNESCO’s draft ruling will be voted on for ratification in July. Insiders say the process is heavily politicised and influenced by lobbying.

Australia’s pre-eminent coral scientist Terry Hughes backed UNESCO’s move, arguing climate change had repeatedly found “climate change is the number one threat to the Great Barrier Reef” and Australia should be criticised for its lack of ambition on emissions reduction.

“There has been a move by UNESCO in recent years to link the climate change policies of individual countries to their stewardship of World Heritage areas, so this draft decision… is a logical one, and one that isn’t terribly surprising,” he told Radio National on Tuesday morning.

The Centre of Excellence for Coral Studies found in October last year that the number of corals across the 340,000 square kilometre reef has on average halved in the past twenty years.

The forecasts for the reef’s survival are dire and there have been three mass coral bleaching events since 2016. When bleached, corals are highly stressed but not dead. However, they are more likely to die when they are bleached and some species take at least 10 years to recover.

A recent Australian Academy of Sciences report said if the world warmed by two degrees Celsius only one per cent of corals would survive. The earth has already warmed by 1.1 degrees and medium range estimates forecast 1.5 degrees of warming by 2045 to 2050.

The federal government has committed $100 million for reef restoration projects, beginning with $2 million to trial underwater fans to cool the water for a tiny proportion of the reef. It is also investigating using sun shields to reduce solar radiation as well as funding ‘coral gardening’ to grow and replace dead corals.

“Restoration projects are a distraction from the real work required to save the reef,” Professor Hughes said told this masthead in April.

“The story that clever science can fix it has no credibility. These projects are feasible, but only at a very small scale at great expense. We need to address the root cause, which is climate change.”