Plane romantic! Boyfriend builds a giant ‘marry me’ sign from wood in his yard to pop the question during a flight with his girlfriend

The big question requires a big sign and one man did just that and took his girlfriend on a small flight to pop the question.

Ryan Wilson, from Lewisport, Kentucky, built a huge sign reading ‘Marry Me’ in his garden with pieces of wood, before taking Shawna Aud on a plane ride and popping the question.

The clueless Shawna could be seen pointing out landmarks on the ground before she spotting the huge sign, causing her jaw to drop, and Ryan unveiled the ring.

Pilot Chris Conley revealed: ‘Shawna had no idea about what would happen on this flight and her reaction is so priceless.’ 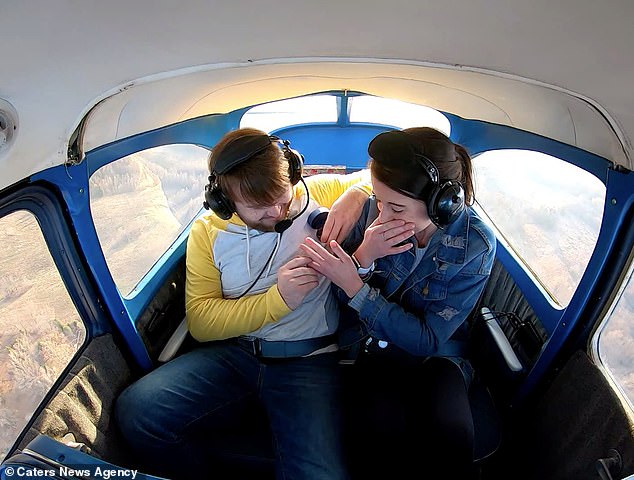 Ryan Wilson, from Lewisport, Kentucky, proposed to his then girlfriend, Shawna Aud by building a huge sign in his garden and taking her on a plane ride on October 16 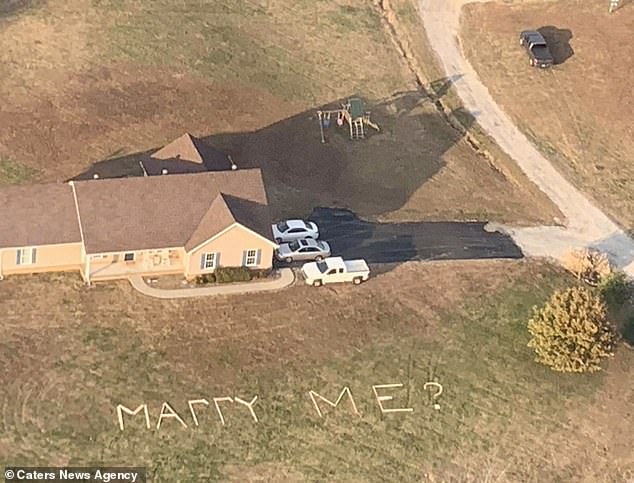 The romantic gesture was helped by pilot Chris Conley, who said Shawna had ‘no idea’ that Ryan was planning to propose during the plane ride

The pair went up in the air while the apprehensive Ryan looked on, waiting for them to approach the sign.

Shawna could be seen snapping shots of the view from the plane window and pointed out landmarks to a nervous Ryan.

And while his girlfriend was distracted by the view, the romantic man could be seen sneaking a ring out from his pocket.

Then, the plane banked hard to the left and as the sign came into review, Shawna’s jaw dropped. 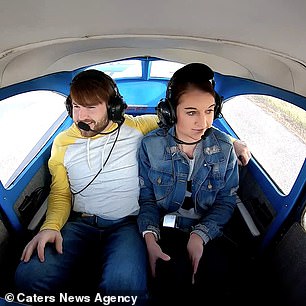 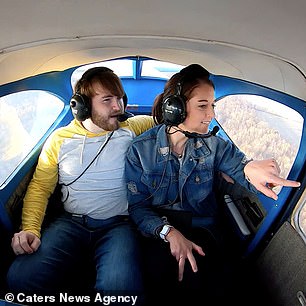 The couple could be seen enjoying the plane ride before the proposal, with an excited Shawna pointing out landmarks from the air (pictured left, taking off, and right, pointing out local landmarks) 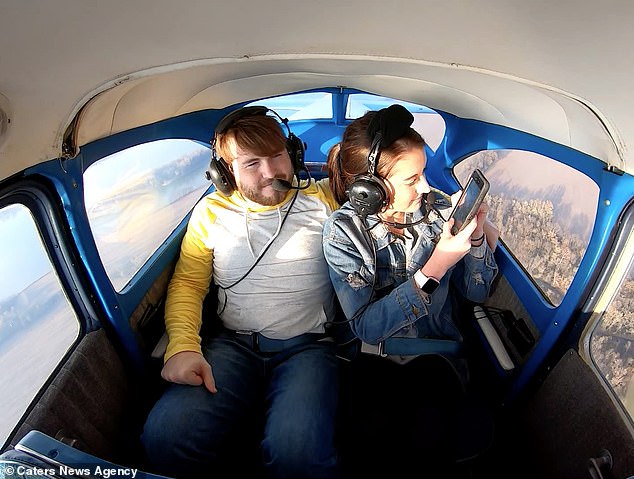 An excited, but clueless, Shawna could be seen taking pictures of the scenery ahead of her boyfriend’s incredible proposal

She turned around to Ryan, who was already waiting with the ring, and replied with a resounding ‘yes’.

Overcome with emotion, Shawna could be seen covering her eyes and beaming while Ryan slid the ring onto her finger.

The pair enjoyed a romantic kiss and enjoyed the remainder of their flight, circling around their house several times to allow the moment to sink in. 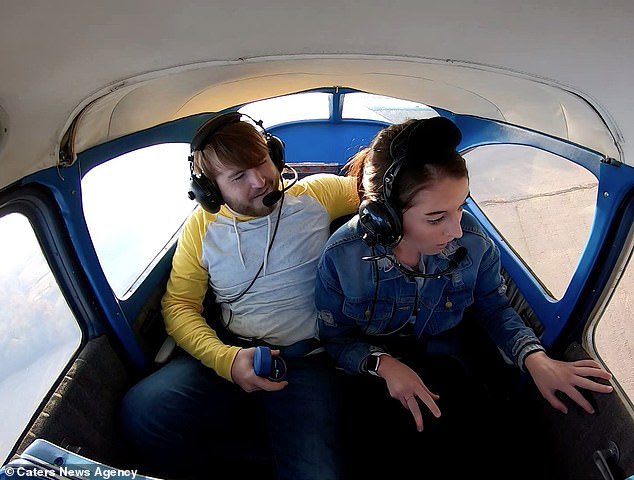 Shawna’s jaw dropped the moment she saw the huge sign reading ‘Marry Me’ on the ground, while Ryan patiently waited for her to turn around and see the ring 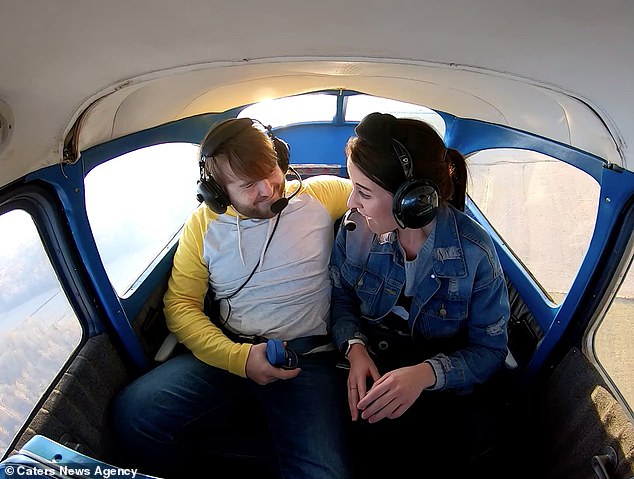 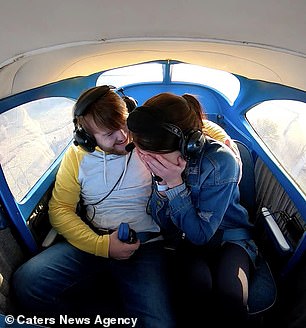 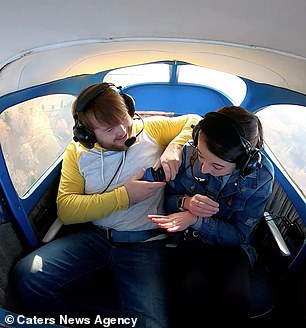 Shawna couldn’t believe her boyfriend’s romantic gesture, and appeared to be in a state of delighted shock throughout the rest of the ride (pictured left, amazed by the ring, and right, wearing it for the first time)

Once safely back on the ground, the couple took a few engagement photographs by the plane to remember the romantic moment.

The pilot of the plane, Chris Conley said: ‘Ryan was discussing ideas about an engagement with me when I offered to take them up in the plane to do the proposal.

‘Ryan then came up with the date and time to do the proposal as well as coming up with the plan to write it out in the yard.’ 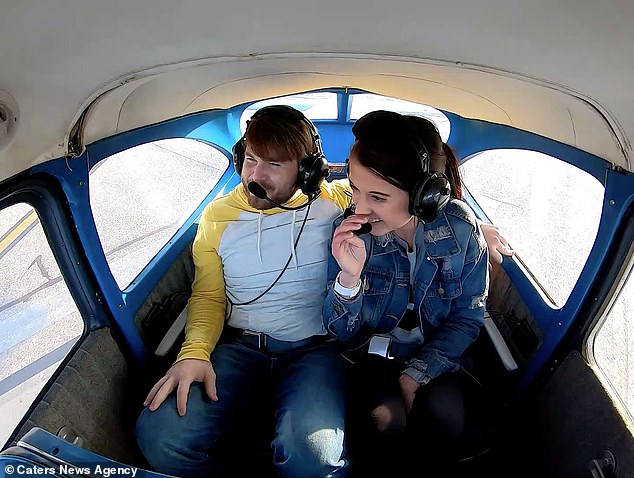 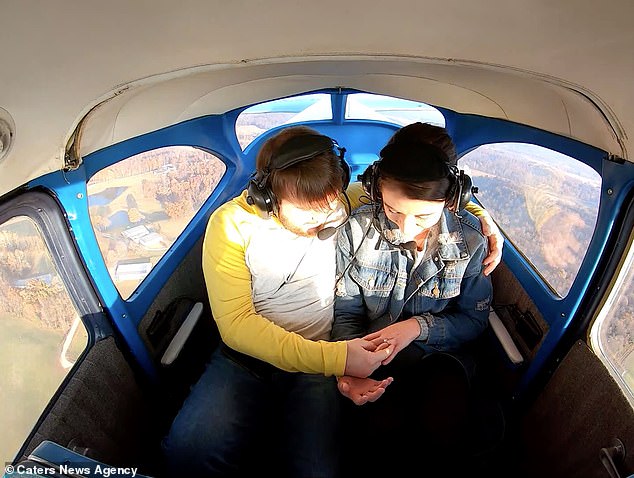 Chris explained: ‘Ryan was excited about the flight and Shawna was as well. I was very excited for them because I knew what was about to happen.

‘This was a very special event. Shawna had no idea about what would happen on this flight and her reaction is so priceless.’ 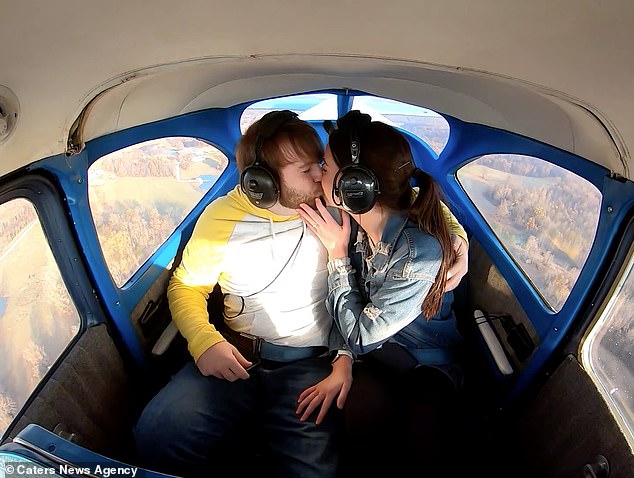 The couple enjoyed a romantic kiss after the proposal, with pilot Chris revealing they were planning to get married in January 2021 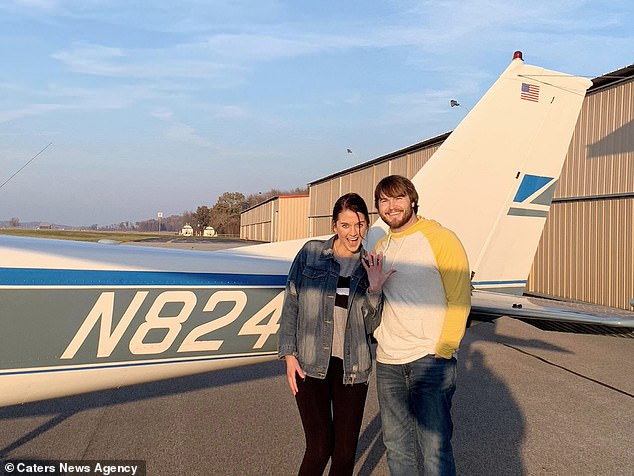 Once safely back on the ground, the couple enjoyed a few engagement photographs by the plane to remember the romantic moment