Mandy Moore has completed a hike to remember.

This week the This Is Us star accomplished a major feat: she climbed to the Mt. Everest base camp. Standing at over 17,600 feet above sea-level, it is one of the most difficult treks for even the most experienced hikers. And, Mandy Moore did it!

She posted numerous photos from their days-long journey, which showed the snow-capped mountains in all their glory. What she didn’t share pictures of were the not-so-glamorous aspects of the trip, like peeing in the snow, which was probably for the best.

Now that the trip has come to an end, and the actress is returning to the comfort of her bed, she is opening up about all the details of the unforgettable experience in an Instagram Q&A.

To kick off the impromptu conversation, Mandy made one thing clear: she didn’t actually climb to the peak of the mountain.

“We hiked to base camp-a weekend long trip through the Himalayas that anyone hiking the south side of Everest must journey through to begin their climb,” she explained. “Everest takes about 2 months total to climb to the top!” Duty calls for the This Is Us star so it’s for the best that she didn’t extend her trip.

During her rather brief trek, the star and her friends were lucky enough to avoid elevation sickness, which is a common problem among hikers. One unfortunate side effect of increased elevation that she did experience was “altitoots.” Oddly enough, at heights like this, passing gas can become a problem. She warned, “Altitoots are real, friends.”

This, compounded with the lack of showers, likely made for a smelly group of trekkers. According to the star, there are “no showers after the first day.”

A sunrise peak at Lhotse, Amadablam and the mighty queen, Everest. This trip has only just started but my soul is already forever changed. The power and energy contained in these mountains is humbling, to say the least. More to come….#whyihike

A sunrise peak at Lhotse, Amadablam and the mighty queen, Everest. This trip has only just started but my soul is already forever changed. The power and energy contained in these mountains is humbling, to say the least. More to come….#whyihike

As if it wasn’t smelly enough, she said there are yaks or mules that help with carrying supplies up the steep slopes. Luckily, the 35-year-old had no complaints about their furry friends. She actually said that she “fell in love” with the four-legged creatures.

As for the bathroom situation… Well, there aren’t many bathrooms on the steep slopes of the mountains. Mandy said that her “favorite” thing was when she peed, or did a “happy natural” as they are referred to on the trail. Going no. 2 was a whole other situation. “You tried to reserve your [poop emoji] for a tea house toilet (basically just a hole in the ground.)”

And hand sanitizer seems like a necessity on the trail. She shared, “There’s water, but no soap anywhere.” 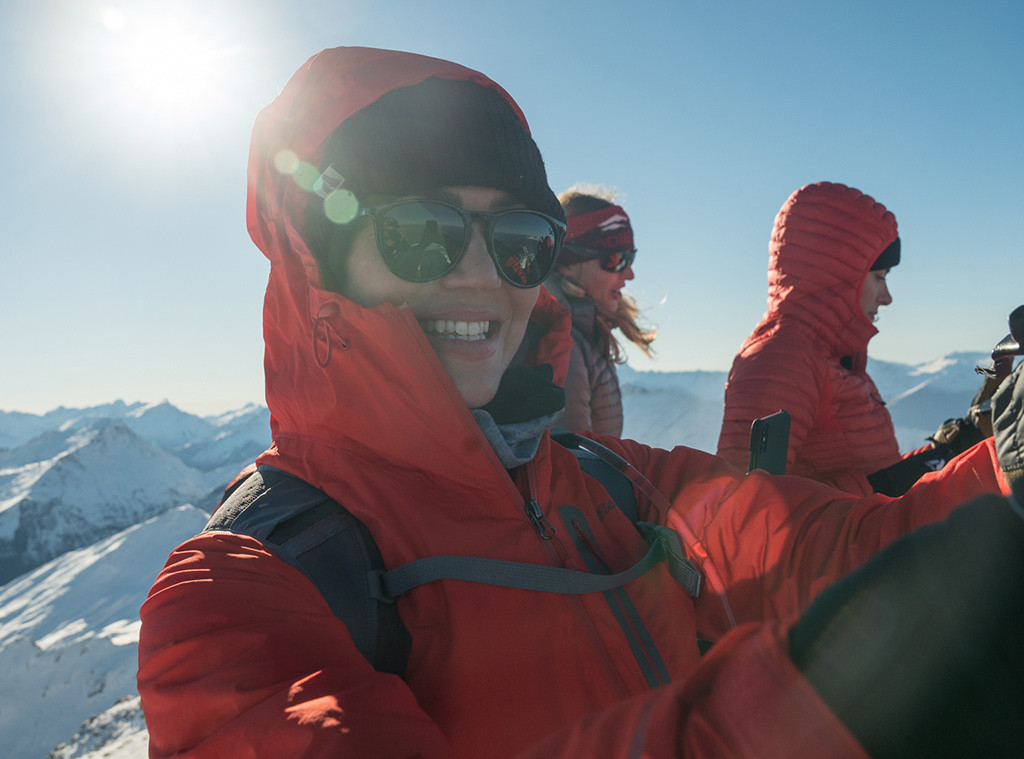 Other tips she had were to avoid making eye contact with stray dogs, since they will “follow you all day.” This doesn’t sound that bad, but she said it was heartbreaking because she couldn’t take them home with her.

And the most important advice of all was to be well-prepared in every sense of the word. Even Moore, who had a world-renowned hiker as her guide said she was still afraid of “getting altitude sickness and letting myself/everyone else down.”

It’s well-known that the trek through the mountains can be deadly. In this past season alone, 11 people lost their lives on their way up the treacherous mountain. Mandy shared, “Climbing the highest peak in the world has always been dangerous.  Considering we were being led by the incredible @melissaarnot who has summited 6 times before and lost many friends and colleagues, we were all aware of the cost and our hearts were with all who had passed. Our visit to Tukla Pass where there are hundreds of memorials for all who have passed away in the surrounding mountains, was the most moving part of the trip.”