As with most kids who grew up doing the propeller and making fruit salads (yummy yummy), Tsehay Hawkins was dancing to Wiggles songs before she could walk.

“My mum thought, ‘Oh wow, she has so much energy.’ So when I was two, Mum put me in dance lessons,” Hawkins says. 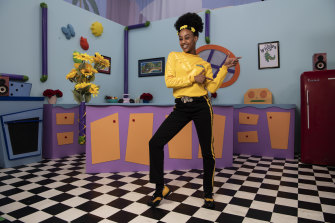 Someone give Mum a high-five.

In the sort of unlikely twist that could fuel a Hollywood biopic, Hawkins, at just 15, is now an official member of the Wiggles, taking over the yellow skivvy from Emma Watkins who announced her departure from the kids’ music icons on Tuesday.

Watkins, the Wiggles’ first female member, spent 11 years in the role. She said she was leaving to devote more time and energy to completing a PhD that “incorporates my ongoing passion for sign language, dance and film editing”, and to concentrate on her work with the deaf community.

Prime Minister Scott Morrison wished Watkins well on Facebook. “You have brought joy to so many young lives, delighting and entertaining children in Australia and around the world,” Mr Morrison said.

A performing arts student from Campbelltown, Hawkins was one of four new names added to the Wiggles in August for the group’s new Fruit Salad TV series. But the swift promotion to its core four was unexpected.

“It’s all been a blur, to be honest,” says Hawkins. “We did Fruit Salad TV, then lockdown happened, then this popped along. It’s just amazing.”

Besides her teenage exuberance, the tenth-grader brings a unique perspective to the Wiggles franchise.

Born in Ethiopia, she was adopted as a baby and moved to Sydney with her Australian parents when she was about six months old. She has a 10-year-old brother, adopted from Colombia, whose playground clout has likely never been higher.

“He loves it,” Hawkins says. “Even when Fruit Salad TV just started, he was telling all his friends, ‘My sister’s a Wiggle!’”

A five-time world Latin dance champion who regularly taps into African dance traditions in her performances, she says she wants to bring her family’s multicultural perspective to her new gig.

“I love all the cultural sides of my background and of my family’s; I’d love to bring that into the Wiggles,” Hawkins says.

It echoes a desire that founding member Anthony Field, the Blue Wiggle, voiced in August when he described the addition of the group’s four new members – which included Tsehay, Indigenous ballet dancer Evie Ferris, Filipino-Australian musician John Pearce, and Chinese-Australian dancer Kelly Hamilton – as “the first step towards shaping the Wiggles for the next 30 years, taking us in a direction that truly represents and serves our community more inclusively”.

Hawkins – whose TikTok channel is filled with clips of her hip-hop dance energy – also offers a necessary boost of youthful relevance to a kids’ franchise that, let’s face it, still includes an opera singer and a guy obsessed with bagpipes.

“Not that the Wiggles aren’t hip – they’re pretty cool, I always thought they were cool,” Hawkins says, “but I think I can bring a bit more of that modern side to the Wiggles.”

Hawkins’ current routine, which consists of three hours of dance and three hours of online schooling a day, is bound to be disrupted when she embarks on her first live arena tour with the group, The Wiggles’ Fruit Salad TV Big Show tour, from February next year.

But she’s leaning on advice from the departing Watkins.

“She just let me know that she’s there for support, that if I have any questions or anything to just ask her,” Hawkins says. “And also just to enjoy it, to embrace having this opportunity.”