Scottish fans of the Duke and Duchess of Sussex will get a chance to see their wedding outfits in much closer detail, after a new royal exhibition in Edinburgh prepares to open.

From June 14th, visitors to the Palace of Holyroodhouse will be able to view the designer attire the Earl and Countess of Dumbarton – as Meghan and Harry are known north of the border – wore when they wed on May 19th 2018 at St George’s Chapel in Windsor.

Meghan’s gown, designed by Givenchy’s Clare Waight Keller and lauded for its tasteful simplicity, previously went on display at Windsor Castle in October 2018. 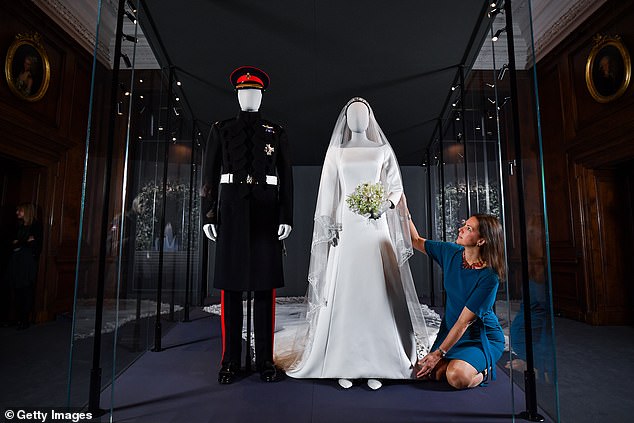 People in Scotland are to be given the chance of a closer view of the Duchess of Sussex’s stunning wedding dress after a new royal exhibition at Palace of Holyroodhouse opens on June 14th. Pictured: Senior Curator Caroline de Guitaut views the wedding outfits of the Duke and Duchess of Sussex 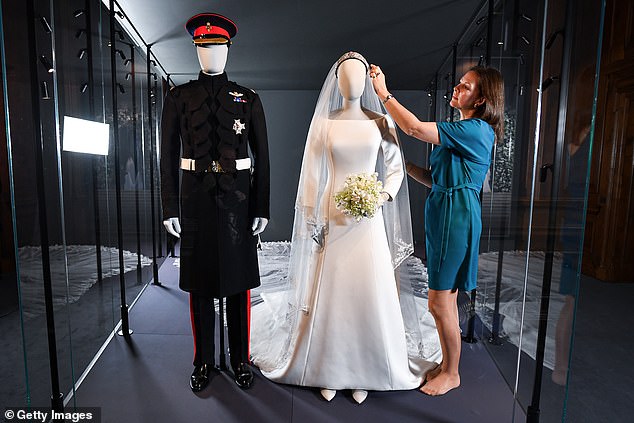 The centrepiece of the display will be the £20,000 Givenchy wedding gown, which will be shown on a mannequin (pictured) 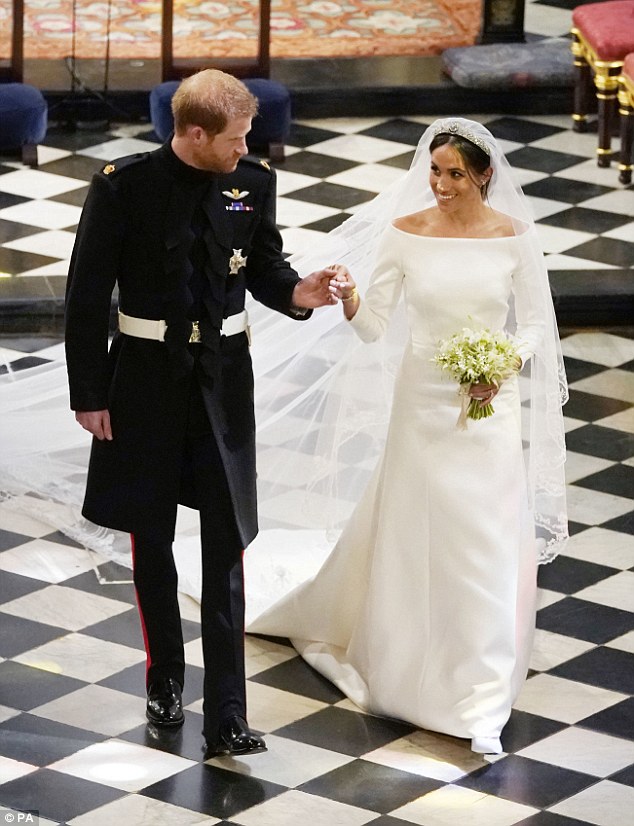 The wedding outfits worn by Harry and Meghan at their nuptials on May 19th 2018; the couple’s attire had been on display in Windsor Castle from October until January 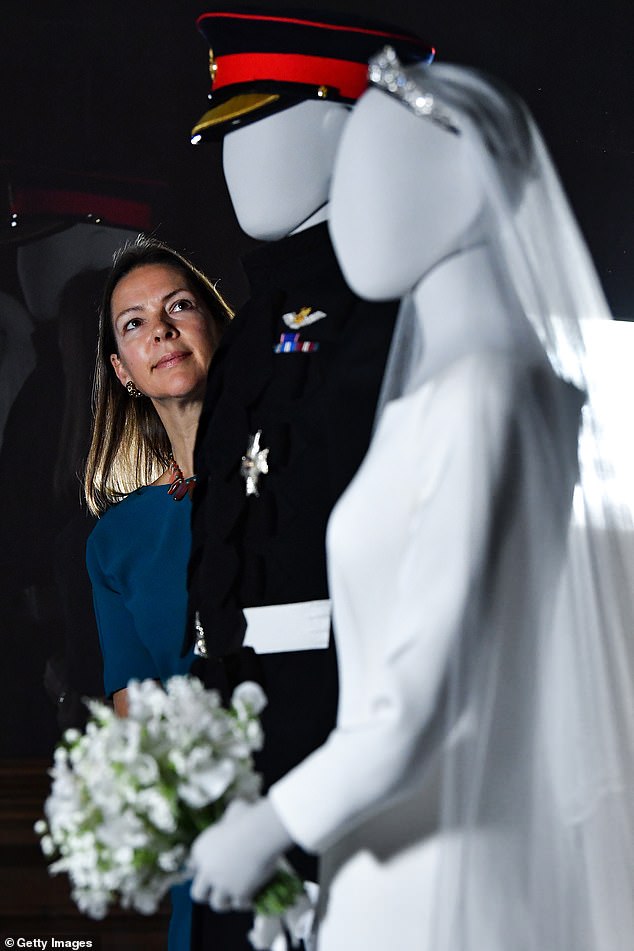 The exhibition: A Royal Wedding: The Duke and Duchess of Sussex, which will also feature an exact copy of the suit worn by Prince Harry as a groom (pictured)

The £20,000 gown was worn by the Duchess of Sussex, 37, as she tied the knot with Prince Harry. The dress, which will be displayed on a mannequin, was made from an exclusive double-bonded silk, developed by Clare Waight Keller especially for the royal wedding, featuring what has become Meghan’s ‘signature’ boat neckline.

Another highlight will be the bride’s 16ft-long veil, embroidered with the flowers of all 53 countries of the Commonwealth.

The delicate embroidery could not be properly appreciated on the TV broadcast of the wedding and so this will be a unique opportunity for royal fans.

The Duchess’s veil was held in place by the Queen’s tiara, which is set with large and small brilliant diamonds in a geometric design.

The Scottish exhibition, A Royal Wedding: The Duke and Duchess of Sussex, will also feature her exquisite veil and a diamond and platinum bandeau tiara, lent to her by The Queen.

Harry’s wedding outfit was a frock coat uniform of the Household Cavalry (the Blues and Royals), specially commissioned for the occasion and made by tailors at Dege and Skinner on Savile Row.

He has loaned an identical uniform to the exhibition which includes a single-breasted blue doeskin jacket and the trousers, officially called overalls, made from a blue and black barathea.

In a recording for visitors, the pair discuss their wedding plans, including the choice of outfits, music and flowers. 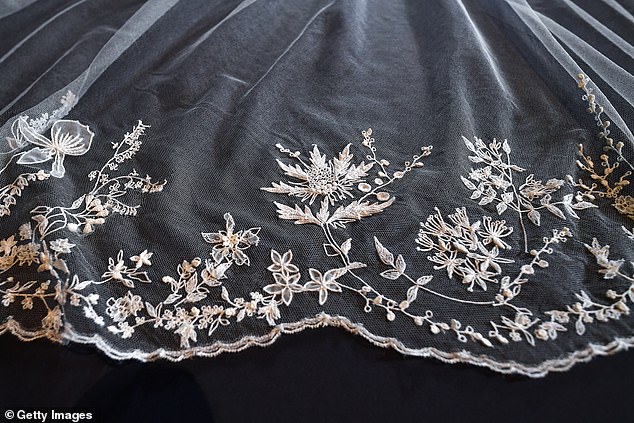 Visitors will be able to look at Meghan’s intricate veil in more detail, with the delicate floral hand-stitched design among the items on display 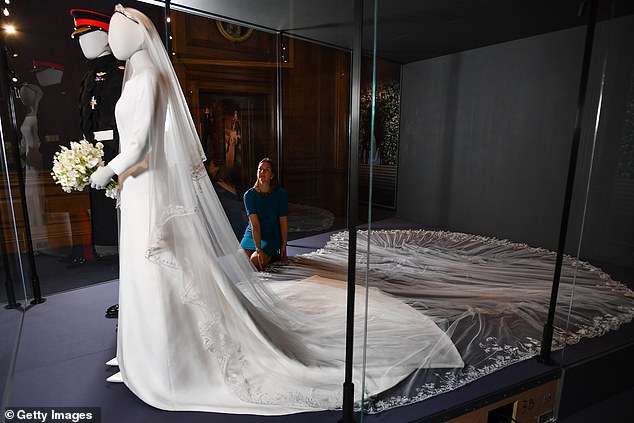 Meghan’s veil was hand-crafted and embroidered with the flowers of all 53 countries of the Commonwealth. Pictured, the veil as seen on a mannequin ahead of the exhibition 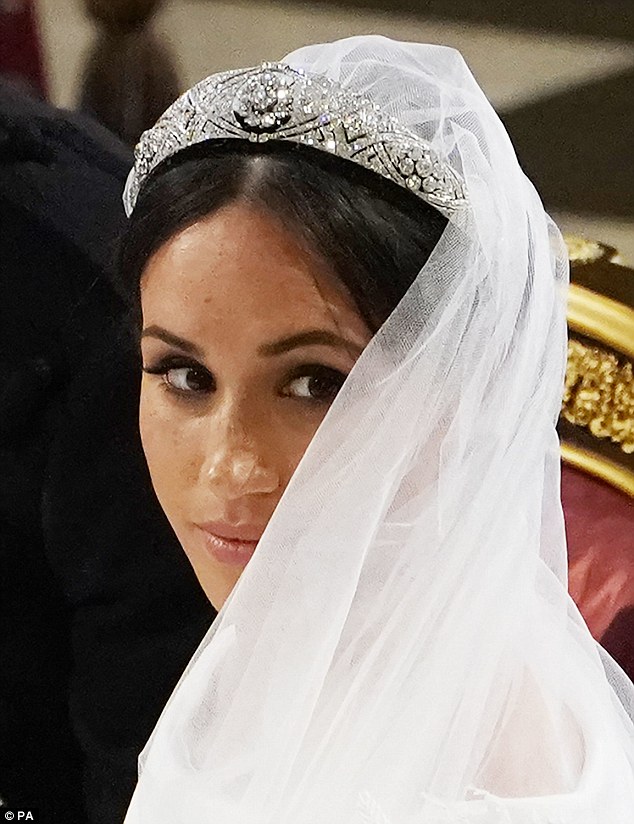 The Duchess of Sussex’s diamond and platinum bandeau tiara, lent to her by The Queen for the royal wedding (pictured), will be on public display for the first time in the exhibition 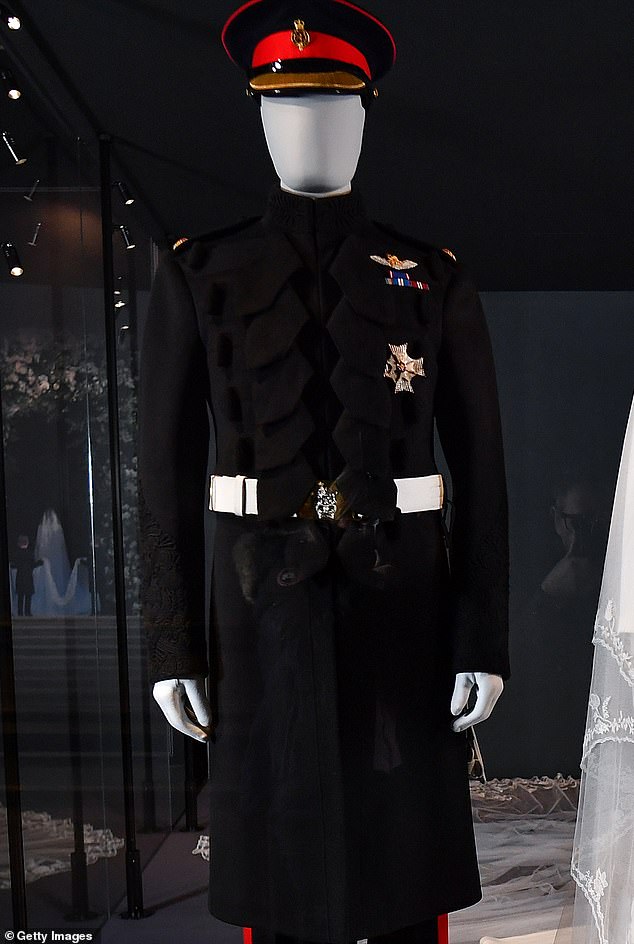 Harry’s wedding outfit was a frock coat uniform of the Household Cavalry (the Blues and Royals), specially commissioned for the occasion and made by tailors at Dege and Skinner on Savile Row 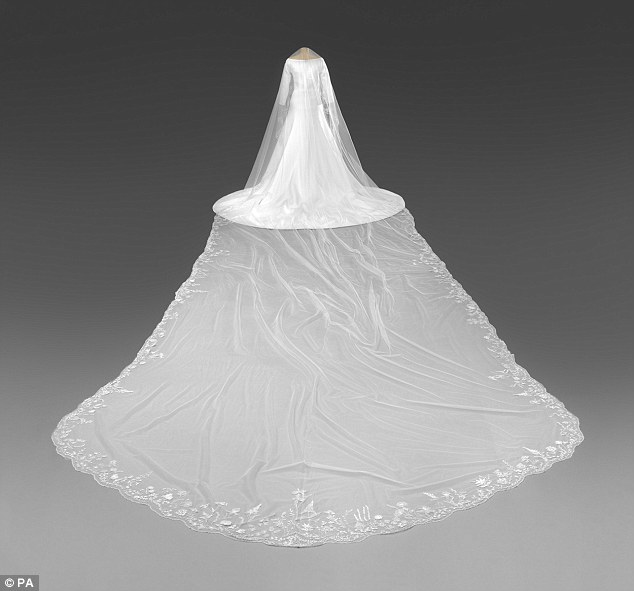 The veil was hand-crafted and embroidered with the flowers of all 53 countries of the Commonwealth. Pictured, the veil as seen on a mannequin ahead of the exhibition 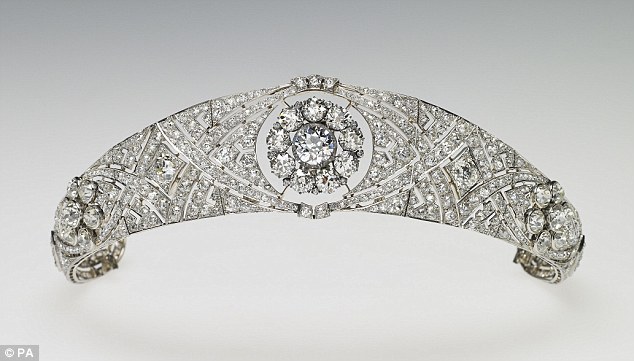 The tiara, pictured, made in 1932 for the Queen’s grandmother, Queen Mary, and bequeathed to the Queen in 1953. It held Meghan’s stunning veil in place on her wedding day 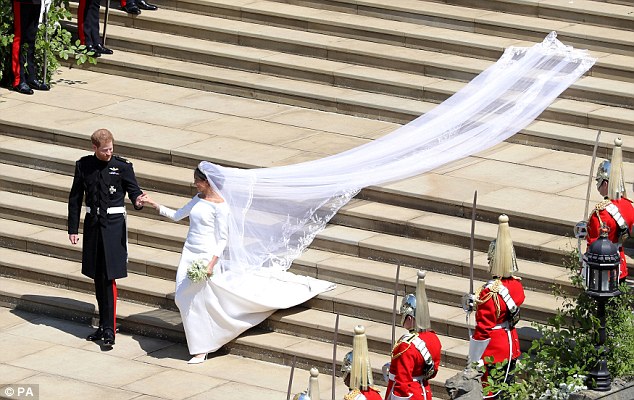 Royal fans will also have the opportunity to see Meghan’s intricate veil in person. Much of the detail of the 16ft-long creation was lost in the images from the Royal Wedding, above

Harry says: ‘I chose the frock coat as a uniform, with permission from my grandmother, because I think it’s one of the smartest Household Cavalry uniforms.

‘It’s one of my favourites, and I was very fortunate to be able to wear that on the day.’

Another display of the exhibition will include Prince George and Princess Charlotte’s page and bridesmaid outfits.

George, one of four pages, wore a miniature version of the Dege and Skinner frock coat while Charlotte, one of six bridesmaids, wore a high-waisted ivory silk dress designed by Waight Keller.

In the recording, Meghan adds: ‘A great level of detail went into the planning of our wedding day.

‘We knew how large the scale of the event would be, so in making choices that were really personal and meaningful, it could make the whole experience feel intimate.’

The exhibition runs until October 6, with tickets and information available on the Royal Collection Trust website 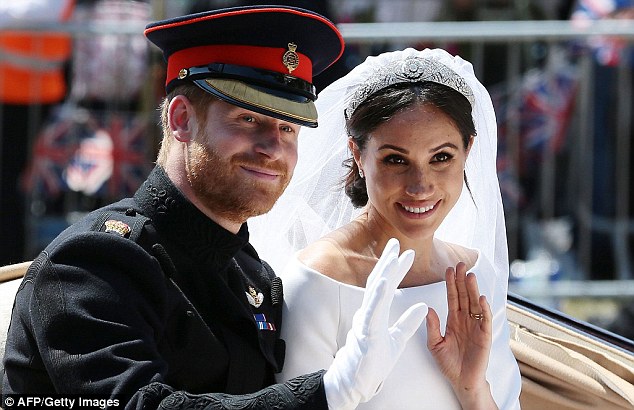 A Royal Wedding: The Duke and Duchess of Sussex, which will also feature an exact copy of the suit worn by Prince Harry as a groom (pictured) will then move to the Palace of Holyroodhouse in Edinburgh, where it will open in June next year

Meghan’s something borrowed: Which tiara did she wear?

The sparkling tiara Meghan wore on her wedding was the Queen Mary’s Diamond Bandeau, which was loaned to her by Harry’s grandmother the Queen from the Royal Collection.

Royal brides are traditionally loaned priceless heirlooms to wear on their wedding day.

Meghan could have chosen the Spencer tiara – famously worn by Harry’s later mother Diana, Princess of Wales when she married the Prince of Wales in 1981.

But Meghan has instead selected this little known piece, which features a magnificent floral-shaped suspended brooch in the centre made of a large round diamond surrounded by nine smaller circular diamonds.

It was specifically made for the Queen’s grandmother Queen Mary in 1932 to accommodate the detachable brooch, which was given to Mary as a wedding present in 1893 by the County of Lincoln.

The bandeau is a flexible band of 11 intricate glittering sections, pierced with interlaced ovals and pave set with large and small brilliant diamonds.

The bandeau and the brooch were bequeathed by Queen Mary to her granddaughter the Queen on her death in 1953. 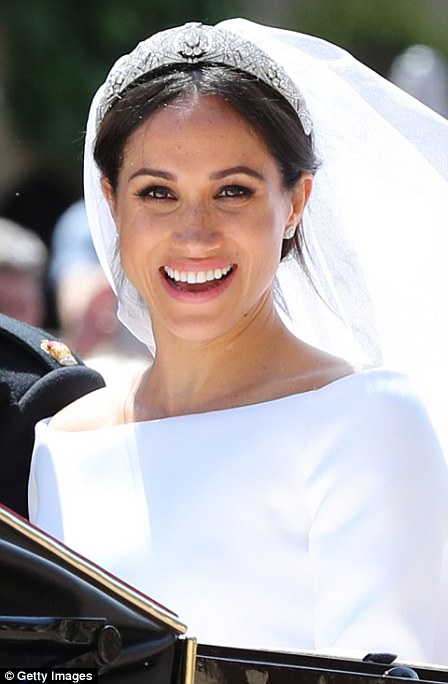 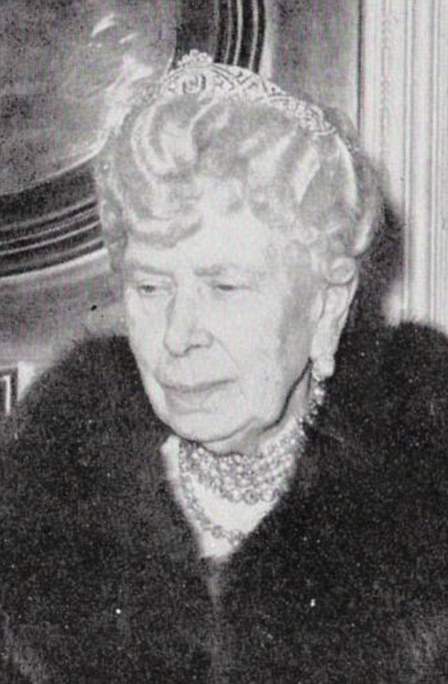 Meghan Markle wore a diamond tiara belonging to the Queen’s grandmother Queen Mary (LEFT). The stunning piece was designer for Queen Mary (right) in 1932 and features a diamond brooch she received as a wedding present in 1893 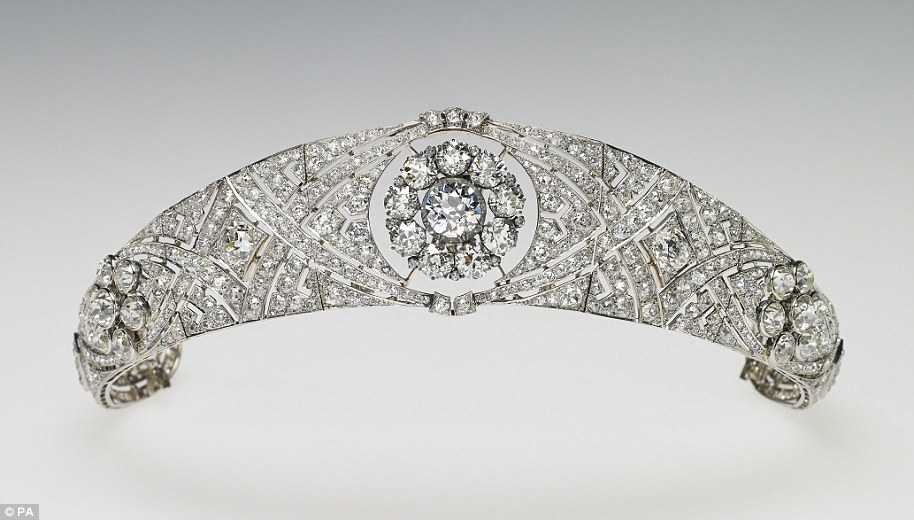 The bandeau, chosen from Her Majesty’s collection, is formed as a flexible band of eleven sections, pierced with interlaced ovals and pavÈ set with large and small brilliant diamonds 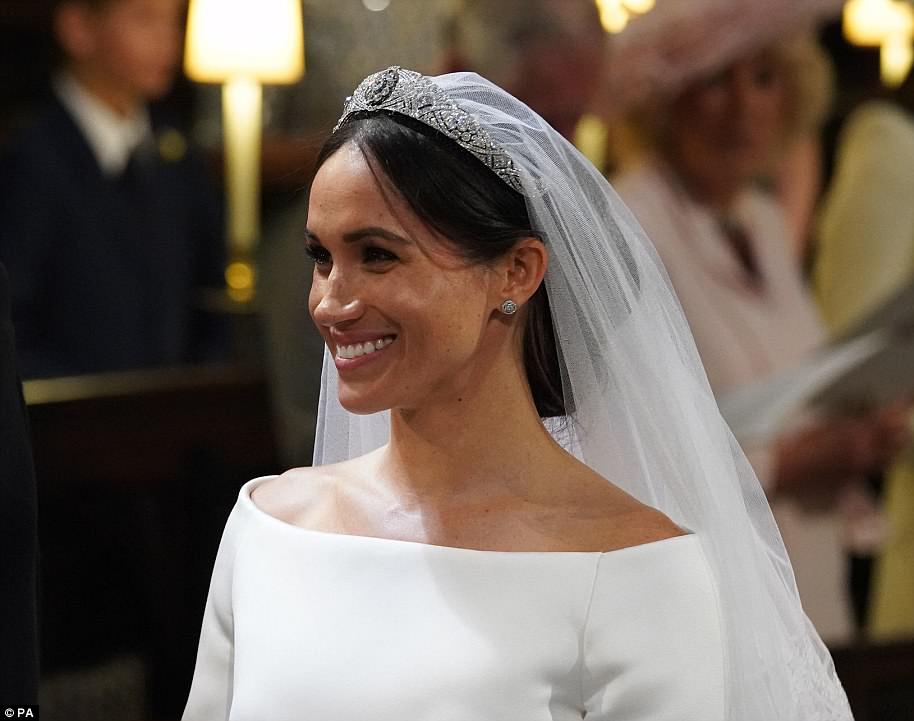 Meghan’s sparkling tiara is Queen Mary’s Diamond Bandeau, which has been loaned to her by Harry’s grandmother the Queen