Mickey Guyton looked absolutely FLAWLESS in white feathers while preparing to pull double duty as host and performer at the 2021 ACM Awards.

Mickey Guyton made her grand entrance at the 2021 Academy of Country Music Awards as an absolute superstar. The “Black Like Me” singer, 37, walked onstage looking like a straight up diva as she kicked off the show with co-host Keith Urban. Mickey rocked a white, feathered robe that gave off major ’70s Diana Ross vibes. The one-shouldered gown featured feathers on the hem and arm. She paired the showstopper with white ankle boots and styled her hair into a half-up ponytail and bangs. 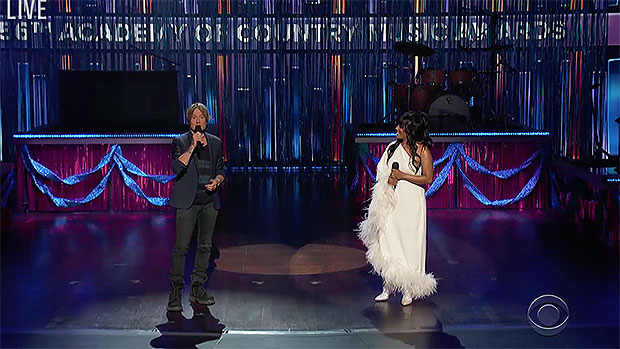 Mickey slayed on the red carpet, too, by the way. The  rocked an intricately beaded gown in a soft beige hue. Her Naeem Khan dress was covered in tiny crystals and clear beads making a leaf-like pattern all over the delicate, sheer fabric. The faux-wrap dress featured long sleeves and a high slit in the front, revealing her legs and a pair of fabulous gold high heels from Stuart Weitzman.

It’s not overkill to say it was one of the sexiest ACM Awards dresses. She channeled old Hollywood with her classic hair and makeup game. Mickey rocked nude nail polish and a shiny nude lip color, along with a dramatic smokey eye. She went with a deep side part and waves in her waist-length hair, and accessorized with wing-shaped Pasquale Bruni earrings and a diamond ring.

Prior to the show, Mickey and Keith spoke to CBS News about their hopes for an epic ACM Awards, despite the circumstances. Like all awards shows in 2021, things looked a lot different, including a pared-down red carpet, a smaller live audience, and some pre-recorded performances. “You know, I wanted to do the praise dance and the hallelujahs and all of that. I still can’t believe it,” Mickey said about being asked to host the show.

This is a night of firsts for Mickey — and for the ACM Awards. The “Heaven Down Here” singer was nominated for New Female Artist of the Year. (Prior to the show, it was announced that Gabby Barrett took home the honor). She’s the first Black female host of the ACMs, and the second Black host of any gender in its 56-year history. Mickey previously made history as the first Black female solo artist to be nominated for a Grammy in a country category.