It's time to get know the new Miss USA, Asya Branch, who was crowned on Nov. 9 following a jam-packed pageant full of sequins, smiles and some hard-hitting questions. 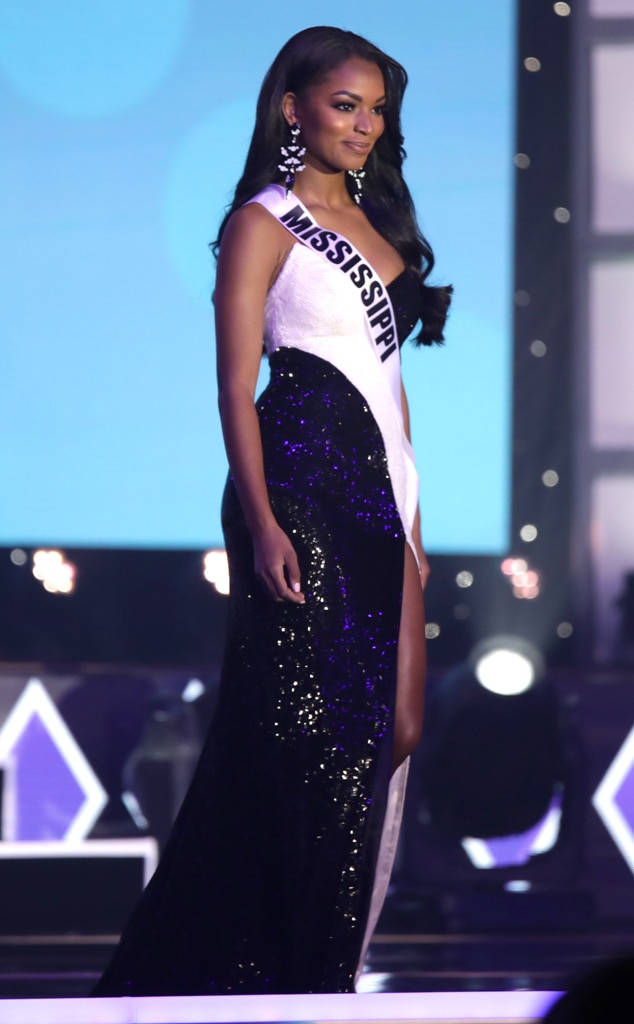 There's a new Miss USA in town, and it's time to get to know her.

Representing the great state of Mississippi, Miss Asya Branch beat out 50 other contestants to snag the title of Miss USA 2020 during a jam-packed pageant that aired live from Elvis Presley's Graceland estate on Monday, Nov. 9.

Hosts Akbar Gbaja-Biamila and Allie LaForce kept spirits high as the number of contenders dropped from 51 to 16, then again to 10 and one more time until only five finalists remained.

Despite some seriously stiff competition, Asya stood out from the rest thanks to her sassy strut in the swimsuit competition, effortless elegance during the evening gown portion and articulate answer to a question about healing the divisiveness felt throughout the country.

In honor of her new role, we've rounded up five things to know about Asya. So scroll on below to learn more about Miss USA 2020.

1. She has a big family. In fact, she's the sixth of eight siblings. "I strive every day to set an exemplary example to my brothers and sisters, whether they are younger or older," she wrote in her profile. "Anyone can be a role model; age does not determine one's ability to have positive impacts in the lives of others."

2. She's an entrepreneur: Asya is the proud owner of a cosmetics line called Branch Beauty. As she stated in her profile, "What started as a makeup obsession has turned into a lucrative business that I am very proud of."

3. She's an Ole Miss alum. While attending the University of Mississippi, Asya pursued a degree in integrated marketing communications with an emphasis in public relations and a minor in general business.

"Through this, I hope to work for a major public relations marketing firm, hopefully in a sports, but it's so much broader," she said in a video posted to Miss USA's YouTube channel. "So, I could change out my job if I wanted. Even with times constantly changing, I feel like it would still be relevant."

During her time at the school, she won Ole Miss' Most Beautiful 2018. However, this wasn't the only university she attended. She also attended Harvard University for summer school when she was 17.

4. She loves to sing. "I've honestly been singing since I could speak," she said in the same video. "When I was younger, I called myself mini Beyoncé. My family really had me up about it. It's just where I find my joy. The arts, music—it's what truly makes me happy, and I feel like music can get you through anything."

5. She fights for change. "I'm passionate about helping people, more specifically, at risk children and the incarcerated," she wrote on Instagram back in July. "For those of you who may not know my story, I grew up as the child of an incarcerated parent. Through the financial, mental, and emotional hardships that I faced, I learned to overcome obstacles and defy odds, but I also learned how unjust our justice system actually is. I learned that many people behind bars don't actually belong there. I learned that systemic racism does in fact truly exist. I learned that incarceration is a shared family sentence."

Asya shared she's "grateful for the hardships" that she's faced because they helped shape her into the woman she is today and made her "a voice for the unheard."

"Having visited prisons and spoken with inmates, having met numerous times with government officials to discuss changes in our prison systems, and having started different initiatives to help aid in the rekindling of family bonds and relationships among inmates and their families, I feel like I've truly made a difference in the lives of many," she continued, "and I don't plan to stop."