On the third day, God created grass… but apparently he didn’t want you to bring it to church.

So discovered one Oklahoma mom, who was booted from a service for attempting to smuggle weed inside — when it actuality, it was cilantro for her menudo.

The bizarre altercation was captured at Redemption United Methodist Church in Oklahoma City on Monday by Ashley, who was accosted by church members over her suspicious Mexican soup topping, with the TikTok video already racking up 3.5million views. 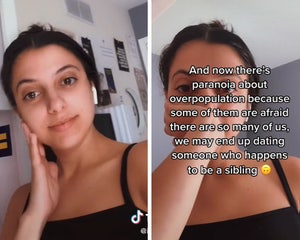 TikToker Discovers She Has 50 Siblings After DNA Test

“Y’all are people of God and you’re gonna do that to me?” Ashely protests.

“You’re gonna bring drugs in here?” the woman fires back.

But her protests fall on deaf ears, as more church members surround her and tell her to leave, until the pastor himself stops the sermon and intervenes, attempting to calm her down.

“I’m not like that,” she says, finally breaking into tears. “I bring my daughter here all the time, why would I do that?”

“The f–king nerve, they’ve no clue” she then snaps in Spanish.

In a second video, Ashley shows that she tried to retrieve the garnish, but they had confiscated it and thrown it out — leaving her menudo without its crucial ingredient.

“They didn’t even let me explain!” Ashley wrote in the caption. “They automatically just accused me!! Not looking for people to feel bad for us just wanted to share!”

She claimed that when she went to ask for the food back, they threatened to call the police.

“The amount of gaslighting in this video is crazyyyyy,” one commenter wrote.

“It’s always those so called people of God and Christians who judge and feel superior,” another added. 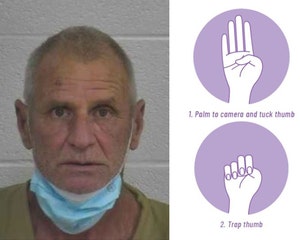 “A church pastor who was more concerned about his sermon than the distressed people in his church,” wrote a third. “Can’t say I’m shocked.”

“The way they’re racially profiling y’all is crazy they didn’t even try to smell the food,” opined a fourth.

Most commenters however, simply laughed at the fact they though cilantro was marijuana.

In a statement, the church said the sermon was for prison inmates and family members; it claimed the incident was not about drugs at all, but that it had a policy against passing food to prisoners.

“Redemption Mission provides faith-based services for inmates through an arrangement with the Oklahoma Department of Corrections and has been hosting services since 1994,” it said. “Family members, visitors and guests are welcome to attend the services as well, but they are not allowed to give food items to the inmates to take back to correctional facilities.

“The video clip that is being circulated around social media of an incident that occurred at Redemption Mission Penn Avenue in Oklahoma City on November 14 is of a person who was upset because the staff did not allow her to give a bag of food to a family member who is an inmate attending the faith service.”

“We are committed to fair and equal treatment of all and regret any misconceptions that may have occurred as a result of this incident.”

On TikTok, Ashley said she is starting a GoFundMe to hire a lawyer to handle the incident.