Moment screaming shoplifter curls up on the ground and ‘throws a tantrum like a five-year-old’ after being caught stealing wine, organic chocolate and £14 worth of honey from supermarket

A shoplifter who was caught stealing luxury goods from a supermarket curled up on the floor and threw a tantrum ‘like a five-year-old’ after being apprehended by security staff.

In the sixth episode of Shoplifters: At War with the Law, which airs tonight on Channel 5, the security team at Weston Favell shopping centre in Northampton observed a man stealing more than £70 worth of luxury food goods, including organic chocolate, wine and a £14 jar of honey at a supermarket.

The man – who didn’t speak English and struggled to give a name of date of birth to the guards –  was taken back to their holding room for questioning when he left the self-service till without paying for most of the items.

Since the stolen goods were worth less than £200, the police weren’t called, and staff told him he was banned for 12 months instead.

But as the man was being escorted to the bus stop, he threw himself onto the ground and sat in child’s pose, screaming and crying.

‘The male was obviously quite hysterical,’ one of the guards at the scene said.

‘It crosses your mind whether it’s genuine or if he’s trying to put on an act and get off lightly.

‘Is he known to police or doing this so he doesn’t get caught by police? You just have to deal with it as you see fit,’ he explained.

The security team watched the man for over an hour on CCTV as he loaded up his supermarket trolley with expensive goods, and snuck them into his backpack racking up £72.84 of items. 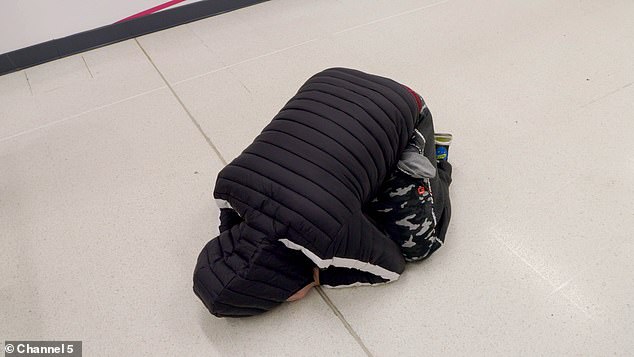 While in the holding room, the man sobbed and was unable to answer questions from the team.

Lyndan, a security guard with expertise in cross examination, repeatedly asked the man what his name and date of birth was, but he struggled to communicate when the thief claimed to be Bulgarian and unable to speak English.

He eventually got the man’s name from his bank card, and he confessed he didn’t  speak Bulgarian but instead Spanish.

‘He doesn’t need the items he concealed, it wasn’t bare necessities, it was a lot of alcohol,’ Lyndan explained after he left. 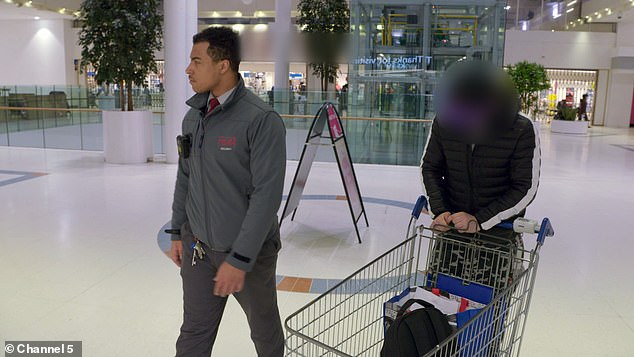 Lyndan, a security guard with expertise in cross examination, repeatedly asked the man what his name and date of birth was, but he struggled to communicate because the thief (right) claimed to be Bulgarian and unable to speak English. He then escorted him out

‘I think he was trying to guilt trip us, make us feel sorry for him, and then after let us say, fine on your way,’ he continued.

‘At the end of they day we can’t take that risk, if it is an act and he thinks he can fool us it won’t be long until it’s he’s back and will do it again.

‘You don’t know people’s reason for theft, but on the flipsdie I have a job to do, and he knows right from wrong’.

Once the guards managed to communicate he needed to leave the centre, Lyndan walked him out to the bus stop.

But on his way, the man dropped to the floor and curls up, screaming and crying while Lyndan asked: ‘My friend, are you okay?’