Mother-of-three, 30, whose family live off food grown on their farm reveals she’s prepared and stockpiled enough ingredients for EIGHT MONTHS worth of meals just in case a natural disaster strikes

A stay-at-home mother who lives on a farm has prepared meals for her entire family for the next eight months in case of a global disaster.

Kelsey Shaw, from Crown Point in Indiana, US, uses her preserving skills to make enormous stores of food for herself, her husband Nathanial and their three children.

She claims she currently has a total of 426 meals prepped for the family-of-five.

During the summer, the family is fed with fresh produce grown on the farm, including eggs from their chickens and dairy products from goats. In the winter, they survive off the preserved meals which Kelsey keeps in the pantry. 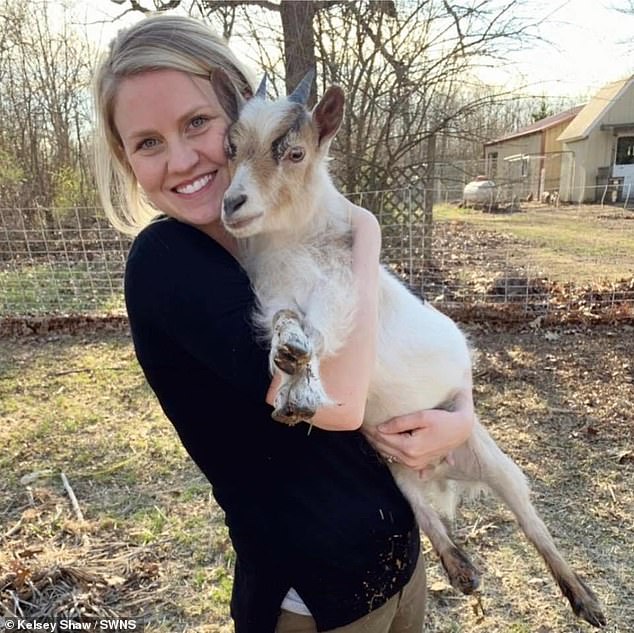 Kelsey Shaw, 30, (pictured with a dairy goat) lives on a farm in Crown Point, Indiana with her husband and three children 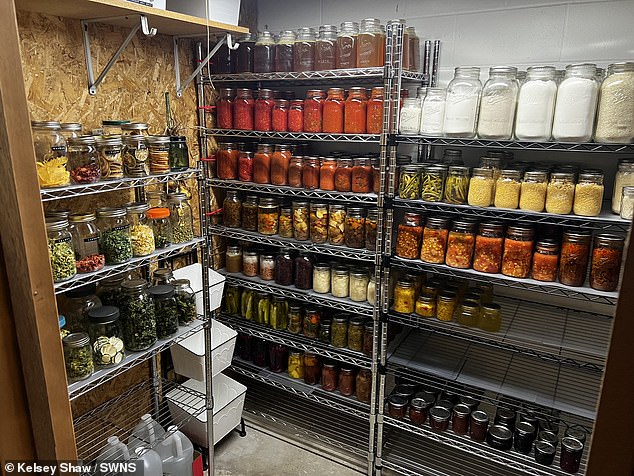 Kelsey says she is proud of her pantry (pictured) which is lined with preserved fruits, vegetables and even whole meals at any given time 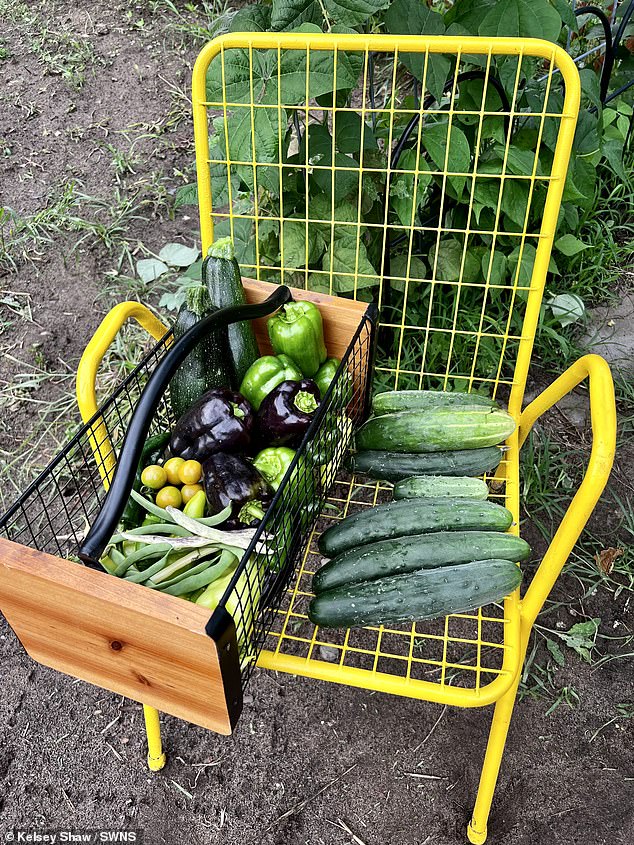 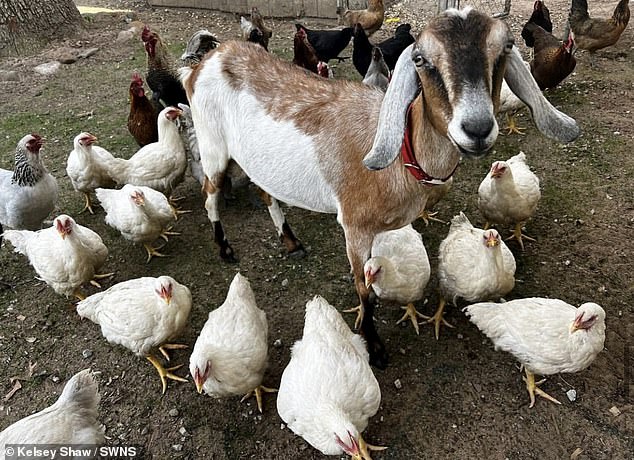 The family keeps chickens so they can have fresh eggs for breakfast every morning, as well as dairy goats for milk and cheese

Mother-of-three Kelsey, 30, said:  ‘When we moved to the farm we wanted to live a slower lifestyle and wanted to know what we were eating and where it was coming from.

‘I taught myself how to preserve food and learnt lots of hacks like making corncob jelly which tastes like honey.’

It takes Kelsey, who is also a photographer, up to three months to preserve all her meals, which includes everything from pickles to beef stew.

‘I spend at least two hours a day in the garden and then the process of preserving things can take days as I go back to things in stages,’ she said.

‘It is a skill to be able to do all the preserving. I’m very proud every time I walk in the pantry.

‘I have it stocked up to feed us about two meals a day from October through to May.’

The savvy mother added her preparedness came in handy during the pandemic when some foods were in short supply at supermarkets due to panic buying. 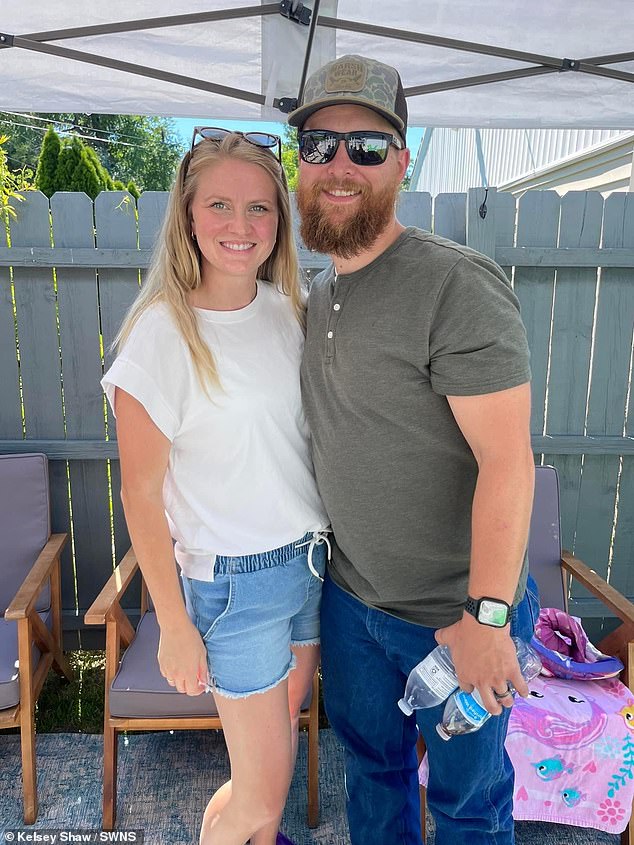 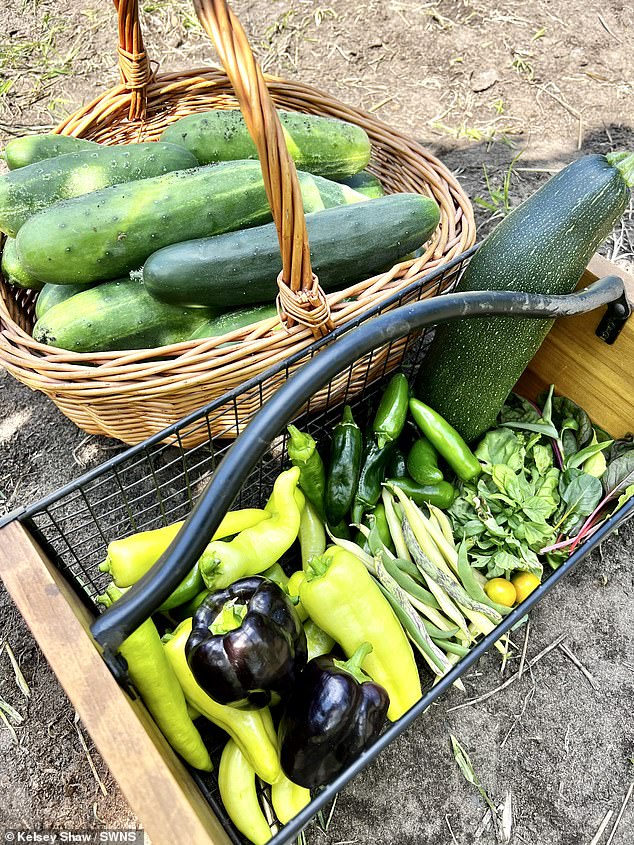 Kelsey, who taught herself how to preserve food from reading and watching videos, operates a ‘no-waste’ policy in her household 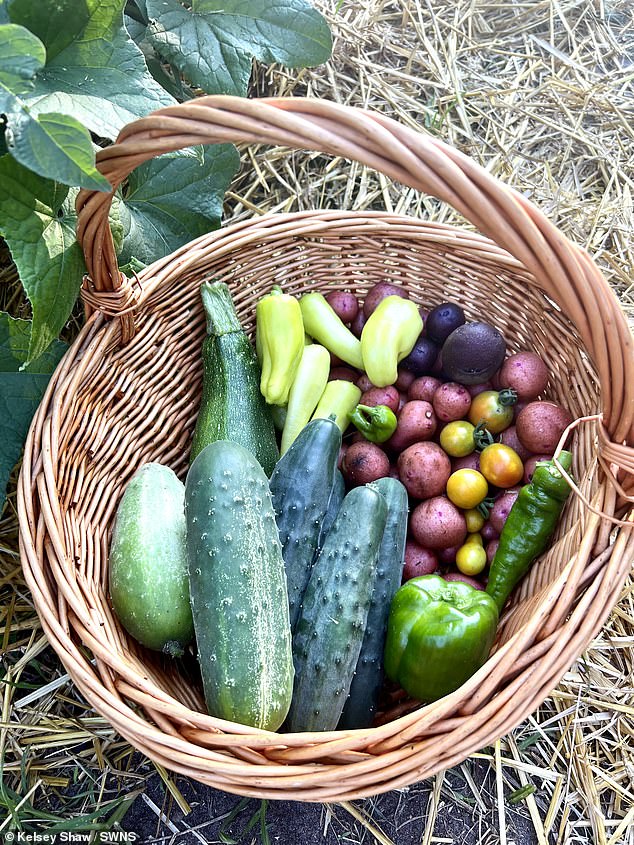 Kelsey grows an impressive selection of vegetables which are eaten fresh in the summer – including peppers, cucumbers and potatoes

Kelsey’s impressive preserving skills are all self-taught after she fell in love with the process when she and Nathaniel moved to the farm from Highland, Indiana in 2017.

From there she began reading and watching videos about different preservation methods.

‘I preserved whole meals, so I’ll make jars of beef stew and then put them in a pressure canner, so they are then ready to keep and use whenever I need them,’ Kelsey said.

‘It means I never have to worry about making dinner if it’s been a busy day.

‘I have tomatoes preserved in lots of different ways and try to use every part of the food we can.

‘I use tomato skins and dehydrate them to make powder that can be added to meals.

‘I also have ready-made tomato sauce and chopped tomatoes canned in my pantry.’ 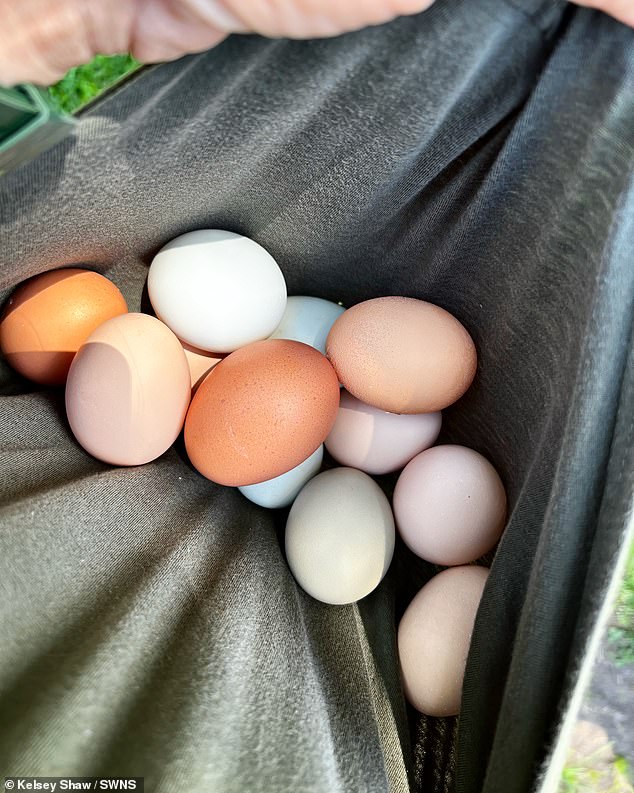 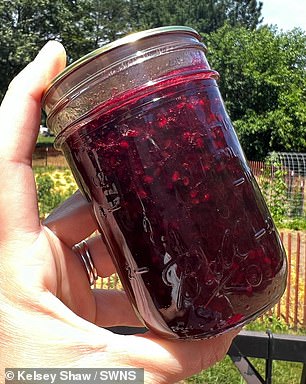 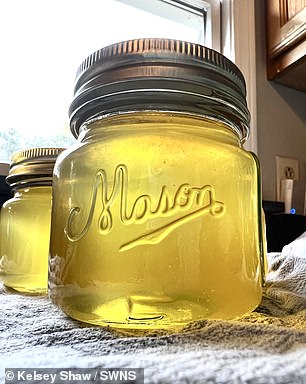 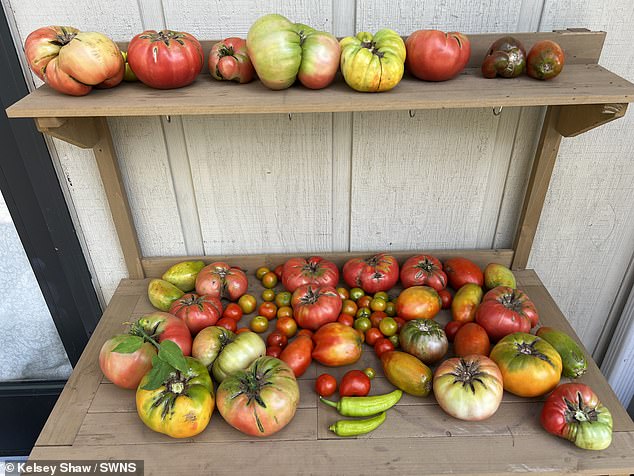 Kelsey, who grows an impressive selection of tomatoes, uses their skins and dehydrates them to make a powder that can be added to meals for extra flavour 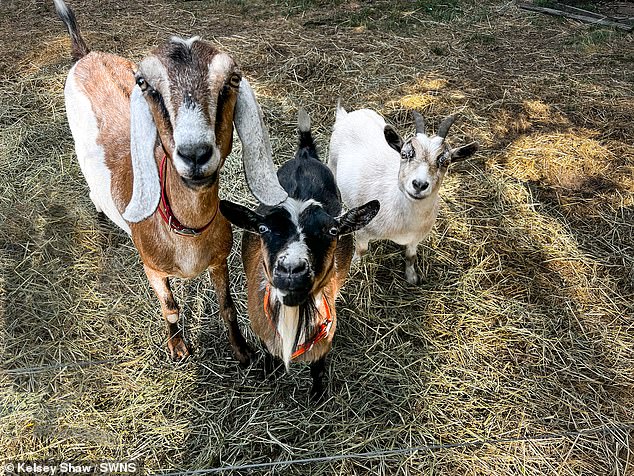 Kelsey uses an inventory to track what she has in her pantry and tackles a food at a time when she is preserving it.

‘It does take a long time, so I’ll often focus on one thing at a time,’ she said.

‘So, one day I’ll pick all the peppers and preserve them. The next I’ll do the tomatoes.’

On top of the preserved items Kelsey makes occasional trips to the grocery store, which is 40 minutes away, to buy things like flour, rice and pasta.

Kelsey said: ‘We eat as fresh as we can have eggs from our chickens for breakfast.

‘We try to be zero waste, so food scraps are given to the chickens or used in my compose.

‘Preserving food is time consuming but I’ve found a real love for it, and it makes meals easier for us as a family.

‘We’re prepared for anything.’