The world’s oceans recorded their hottest year in more than 60 years with greenhouse gases driving increasing temperatures, amid concerns the ocean’s ecosystems will be unsustainable in the warmer climate.

The annual study, which draws on data between 1958 and 2021, published in the journal Advances in Atmospheric Sciences, found that ocean heat content during the past five years was the warmest in its records, driven largely by anthropogenic greenhouse gases. 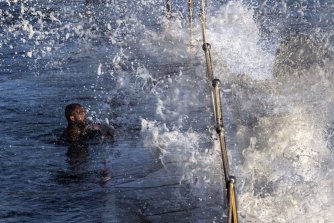 ANU institute for climate, energy and disaster solutions director Professor Mark Howden said oceans played a vital role in absorbing about 90 per cent of the heat and gases in the atmosphere.

He said the results were worrying and continued a long-standing trend of rising ocean temperatures, particularly given records had been broken despite last year’s La Nina event, which brings cooler conditions. As oceans continue to warm, marine heatwaves are likely to become more common. They are already twice as frequent as they were 40 years ago.

“If we keep a foot on [the] climate change accelerator, there will be 40 to 60 times the number of marine heatwaves around Australia by the end of the century,” he said.

The study found that since 1958 the world’s oceans had absorbed between 4.7 and 5.7 zettajoules of energy per year in the upper 200 metres of the ocean. A zettajoule is a measurement referring to a vast amount of heat energy – estimated to be about twice the world’s total human-generated energy production in a year.

It represents a huge amount of extra heat being stored in the seas. The study also found the rate of heat absorption had increased markedly in recent years, with eight times as much heat being absorbed on average between 1986 and 2021, compared to 1958-85.

Professor Howden added the report provided a sense of urgency to reduce the impact of climate change, with technology and business already leading the way. Political will was lagging, he said.

Physical oceanographer Ian Young at the University of Melbourne said warmer ocean temperatures would create more intense weather systems, such as storms and tropical cyclones. He added that increasing greenhouse gases in the ocean, especially carbon dioxide, would have an impact on the seas’ acidity.

“Carbonic acid eats away at calcified organisms, like shells. Animals are having their shells eaten away by the acidity of the ocean,” he said.

Australia Institute of Marine Science coral biologist Dr Neal Cantin said there were sections of the Great Barrier Reef that were several degrees warmer than they were historically for this time of year, with scientists monitoring for bleaching events. But he added that global marine ecosystems were all at risk of warming ocean temperatures.

“I don’t think coral reefs will be able to keep up with these warming trends. Coral reefs are the poster for ecosystems – they are the base of the system. Coral is sensitive to subtle changes in temperature and light,” he said. “The oceans are warming faster than they have ever warmed on record, animals and ecosystems that are dependent on temperatures are going to respond negatively.”

The release of the study coincides with the publication of the Copernicus Climate Change Service report that found the past seven years had been the seven warmest on record despite the La Nina weather pattern. The report showed the world has already warmed between 1.1 and 1.3 degrees above pre-industrial levels.

A preliminary study of satellite data by Copernicus, which provides climate data to the European Union, found that greenhouse gas emissions continued to rise despite the economic slowdown caused by the COVID-19 pandemic. Carbon dioxide levels reached an annual global record of approximately 414 parts per million and methane an annual record of approximately 1876 parts per billion.

A guide to the environment, what’s happening to it, what’s being done about it and what it means for the future. Sign up to our fortnightly Clear Air newsletter here.

Most Viewed in Environment