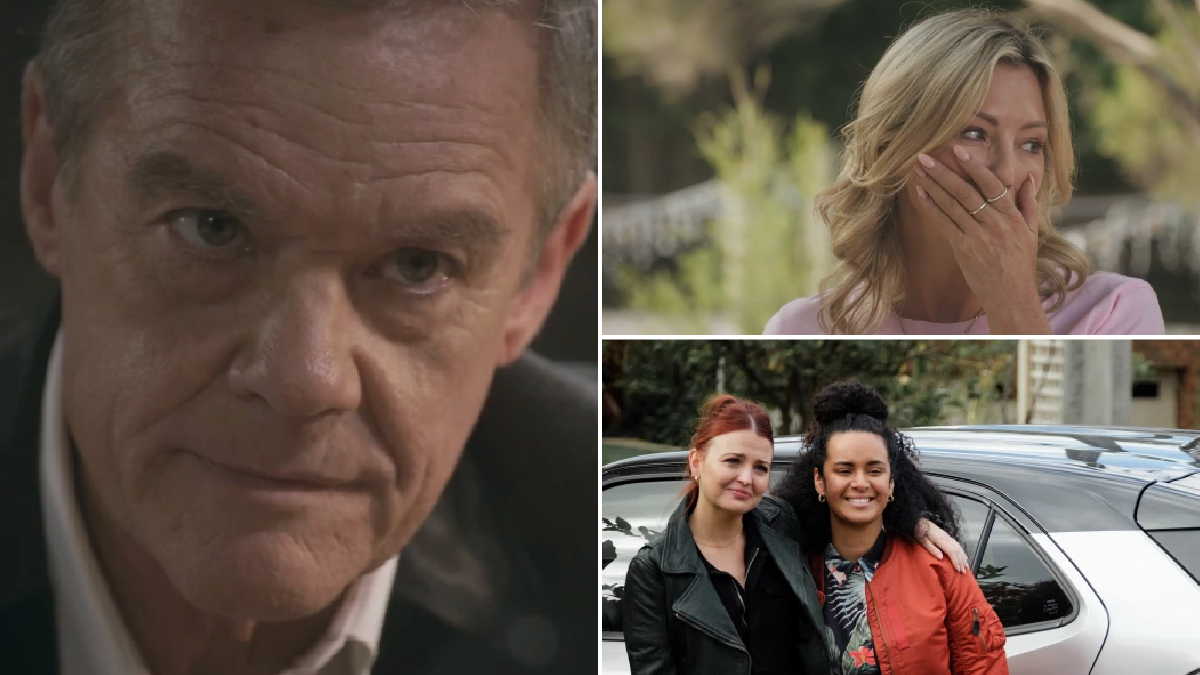 The penultimate week of Neighbours is upon us and the drama is brought by the bucket load.

Izzy Hoyland (Natalie Bassingthwaite) is of course at the centre of most of that, driving our beloved Susan Kennedy (Jackie Woodburne) to despair.

Susan is convinced Izzy is back with some kind of hidden agenda. While she tries to get to the bottom of it, Izzy hits them with a huge confession. Can the family survive this latest crisis?

Speaking of crises, Toadie (Ryan Moloney) is facing one when Amy (Jacinta Stapleton) finally confesses her love for him. What will he do with this shocking news?

Paul Robinson (Stefan Dennis) is also in a pickle when his old pal Shane Ramsay (Peter O’Brien) drops a clanger that may mean Paul will have to sell him his full share of Lassiters. Is Paul about to be dethroned as the king of his hotel?

Chloe (April Rose Pengilly) makes a huge decision to sell No. 24. How will her crew react?

And Jane (Annie Jones) dumps Clive (Geoff Paine) when she decides it’s all got a bit much.

Here’s what’s ahead on the second to last week of Neighbours.

Susan is suspicious of Izzy, and quite rightly so. Surely she has an ulterior motive in cracking on with her ex’s son? Izzy corners Karl with a shocking request and things start to become clearer – she wants to make a dream of Mal’s come true, and to do so she needs Karl to do something for her.

He is left with an impossible dilemma. Susan is horrified to learn Izzy is using Holly as a motivator to manipulate her and Karl.

Susan and Karl are left with a terrible situation, one that leaves Susan ultimately feeling like the loser. The four go out to brunch to talk things over, and as ever, Izzy is full of surprises. She drops another corker and Susan is pushed closer to the edge. Is Susan about to snap?

As the wedding approaches and despite Zara’s incessant whining about the situation, Amy decides to step aside and bury her feelings. Not an easy thing to do, and though she has good intentions, the pressure is set to build as she bites her tongue. Then her worst nightmare hits – she’s asked to make Melanie’s wedding dress. She’s nearing breaking point and turns to Harold for support. Toadie and Mel, meanwhile, have sussed something is up but cannot put their fingers on what.

As they try and probe, it proves too much for Amy and she cracks – spilling the beans. Toadie is completely blindsided and in shock, withdraws from Amy. She in turn avoids him, and it all gets awkward. The couple want to know how this has happened but Amy refuses to tell them and instead decides they need space. Is she set to leave Erinsborough, or will Toadie call off his wedding?

Paul Robinson has clung on to Lassiters for years, but he’s on the brink of losing it. When his old pal Shane returns, it looks like Paul might be on course to save his beloved business. But things turn sour when Shane rescinds his offer of a partnership after learning the truth about Paul’s antics from Tim Collins. Paul is gutted, it looks like he might now have to sell to Shane entirely. But just as he gives up hope, a sudden new opportunity arises. Is Lassiters saved after all?

Nic and Kiri: Will they or won’t they?

These two continue to play games with one another as Nicolette is trying to play it cool, but she has gone to the extreme end of the barometer. Kiri still wants her and arranges a romantic trip to River Bend to recapture their magic. With Nicolette still overly nervous and unsure how to navigate it, will she ruin everything?

Jane is a saint with putting up with Clive’s recent revelations about his connection to Danielle, one of Byron’s gigolo clients. Clive does what he can to try and earn brownie points to get Jane back on side, but the stress of Byron’s unemployment pushes her to her limit. Her limit reached; she tells Clive there’s no saving their relationship. It looks like that’s it for this pair.

Chloe decides to sell no. 24

It’s the end of an era for no. 24. Chloe arrives home from her trip and drops the news on her housemates that she’ll be selling the house. But just as she reveals her decision, a familiar face arrives in town. There’s some mystery going on here – why is this person back and what do they want with Chloe? The house goes on the market and almost immediately finds a buyer. But there seems to be something off about why this person wants to buy the house. The plot thickens.