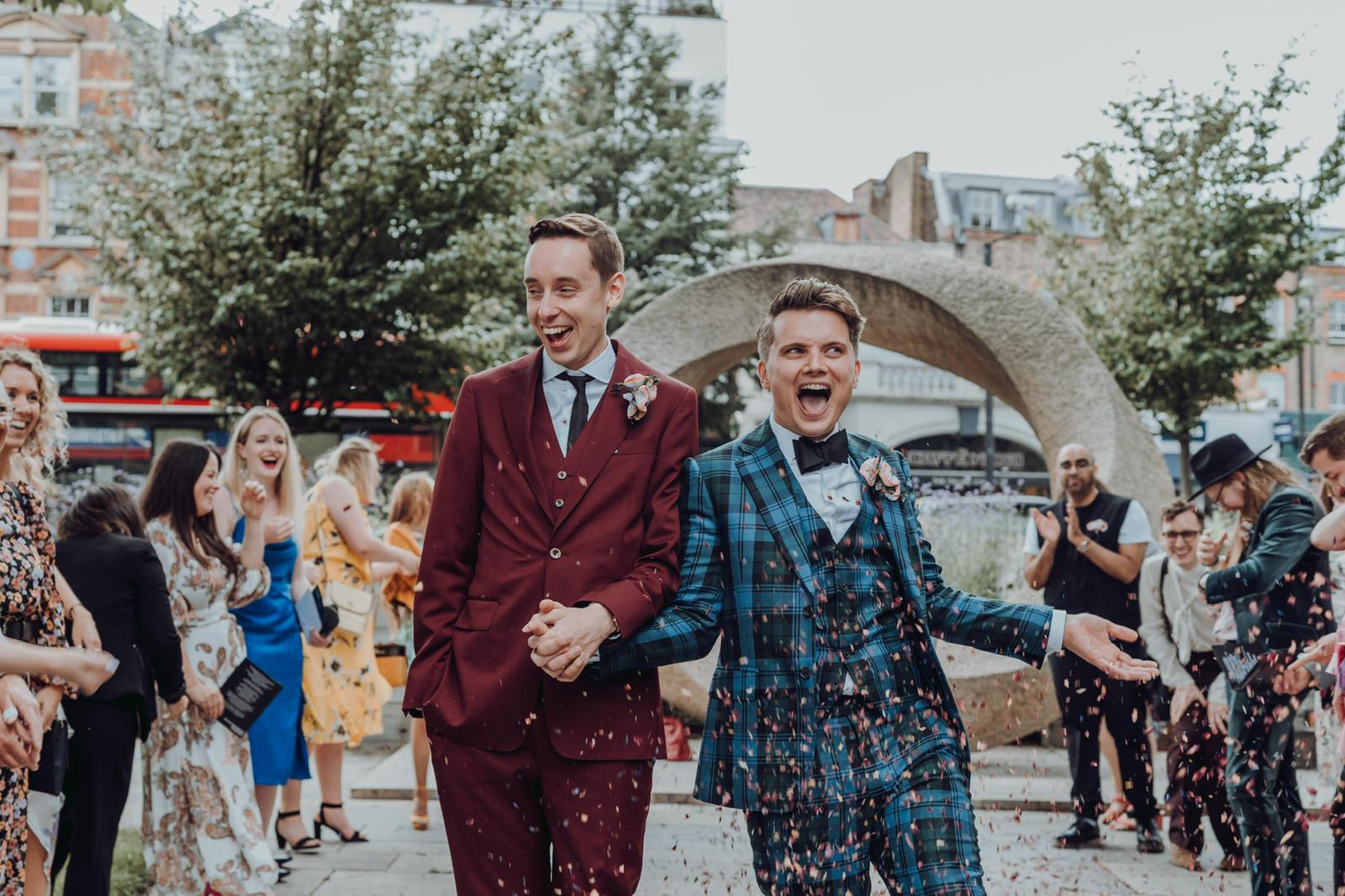 It’s been almost three weeks since my wedding day and honestly, I feel like I still have a bit of whiplash.

For months – years – that one date was looming up ahead in the middle distance; taking up an ever-increasing amount of brain-space, necessitating more and more spreadsheets, and requiring a borderline barbaric volume of WhatsApp splinter groups.

When you’re as extra as my hubby and I, and you chuck in endless bells-and-whistles (did we have a customised version of Drag Race UK’s UK Hun as our mid-ceremony anti-hymn? We didn’t not), suddenly there are even more things to plan: film clips to edit, first dance routines to choreograph, heels to practise walking in.

Gradually it went from being X months away to X weeks away, then it was X days away, and then – in one big, blindingly intense flash – it was over.

I was expecting one hell of a comedown. I was braced for it. I know what I’m like: every time I’m involved in a theatre show, I have to prepare myself for the obligatory wave of sadness once it’s over. We all know that grim back-to-reality feeling that hits when you return to work after a killer holiday.

So given how long our wedding had been in the pipeline (we got engaged almost four years ago), I was ready for the aftermath to be pretty severe.

But in addition to those expected blues, what I wasn’t so prepared for was the accompanying post-wedding anxiety.

By that I mean not just being sad that it’s over, but also panicking over whether or not it was actually a success.

For context, in case it’s not already obvious, I’m a meticulous planner. You bet I had a very thorough Google Doc laying out the intricate schedule of the day in minute detail; from the rooftop pre-ceremony prosecco with our nearest and dearest to the ‘play’ button being pressed on the ridiculously over-prepared party playlist.

Most of it went to plan, some of it was adapted as we went, and a couple of things – inevitably – went outright wrong.

For one reason or another, some guests were left waiting for what felt like thousands of years for their meals; I’d managed to mess up the communication a bit in terms of booking taxis for some guests between the ceremony and the reception; and one of the suppliers for the evening party didn’t even get into the venue until 10pm.

All of it, of course, was fairly minor in the grand scheme of things, and in the back of my mind I know that those little niggles are nothing compared to everything that went right.

Our friends and family’s speeches were all perfectly pitched; our ceremony was nine billion times more emotional than I expected (you know that Friends episode where emotion-averse Chandler ‘opens a gate’? My gate wasn’t so much opened as ripped off its hinges and hurled into the sun); and our first dance – in which we dressed in drag and did a lipsync to a Carly Rae Jepsen banger – was an absolute blast.

Everyone looked incredible, our army of phenomenal helper-outers delivered in spades, the laughter was relentless, and – if I may say – the playlist was truly something. The 11pm sing-a-long to Michelle McManus? It will, I can only assume, go down in history.

But boy, did I spend the first few days of our mini-moon focusing on what went wrong, rather than all the stuff that went right.

You go into a wedding assuming it’ll be the only one you ever have. So as someone who’s guilty of over-planning at the best of times, I had put a lot of energy into making sure it was as perfect as it could possibly be.

So when, for example, the food was a bit late and I knew some people were bloody starving, I was terrified for days afterwards that it would be their main headline takeaway from the day. I feared that it would be the first thing they told people about when they talked about it afterwards.

It’s daft. Nobody’s mentioned it to me since, and in fact I’ve started getting teased for the fact that I myself won’t shut up about it.

And yet, for at least the first week of married life, I just kept on dwelling on those niggly little things, which, in turn, snowballed into other concerns. Little pointless worries like ‘should we have made X changes to the table plan?’, ‘did people have enough booze?’, ‘did we cram too much in?’, ‘should I have made more of an effort to speak to X?’, and so on and so on.

But such anxieties, it turns out, are extremely common.

Psychologist Jocelyn Charnas told the Washington Post in 2018: ‘Like any milestone we look forward to, a certain degree of difficult feelings [are] not uncommon after the fact… and the more pressure and expectations, the harder the letdown can be.’

Now that a couple of weeks have passed, I have a bit more perspective.

Reading the cards, soaking in the love that people shared on social media, and talking to folks about their fun stories from the event have all helped me see it as the joyful experience that it was.

And the memory of having so many loved ones together in one place, especially at this moment in time, is absolutely priceless. As LGBTQ+ people, being in a position where your relationship is celebrated by hordes of friends and family is sadly not a given – and we don’t take for granted how fortunate we are.

Most importantly, my new husband – the person who deserved a blindingly good day more than anyone – bloody loved it.

Would I like to do it again, maybe with a couple of minor tweaks and a bit more of an ‘oh, f**k it’ attitude? Sure! But who wouldn’t want to do something like that again and again and again?

If I could go back to the day before the wedding and give myself a little heads-up, I’d say the post-wedding comedown is inevitable, and the accompanying worries and anxieties are natural.

But any and all glitches shouldn’t take away from the amazing experience of being swamped by a ludicrous amount of love and joy – nor from the happiness that comes from finally, after so much build-up, marrying the love of your life.