Her royal high street! Pregnant Princess Eugenie shows off her baby bump in a sparkly dress and £100 Zara coat as she leaves work in Mayfair

Pregnant Princess Eugenie has proved that you don’t need to splash out a fortune on you maternity wardrobe as she stepped out in London, wearing a smart blue coat from Zara.

The royal, 30, who is expecting her first child with husband of two years Jack Brooksbank, 34, was spotted as she left work at the Hauser & Wirth art gallery in Mayfair.

The expectant mother cut a cosy look, wearing a black face covering with a red lips print and a sparkly dress underneath a large blue winter coat, believed to be from Zara.

Eugenie and Jack announced in September they are expecting their first child in early 2021. 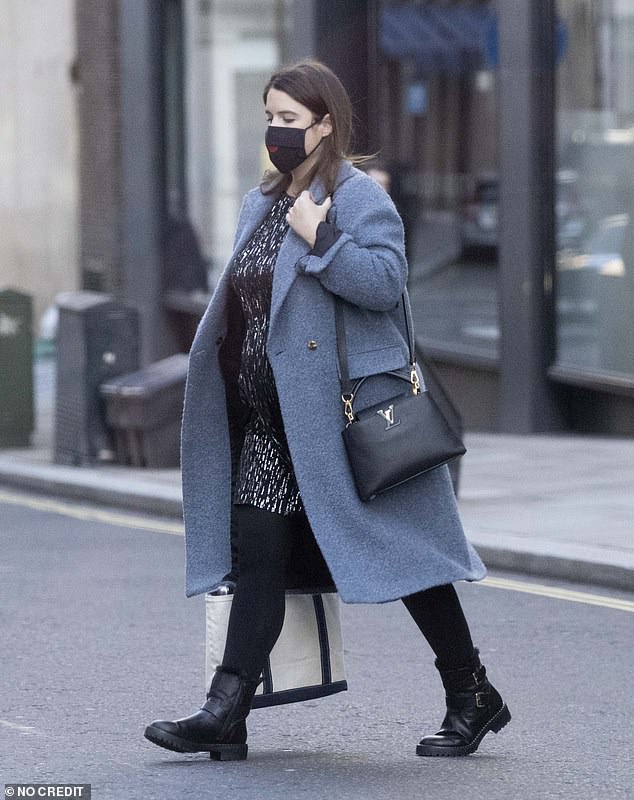 Princess Eugenie, 30, was spotted leaving the art gallery where she works in Mayfair over the weekend 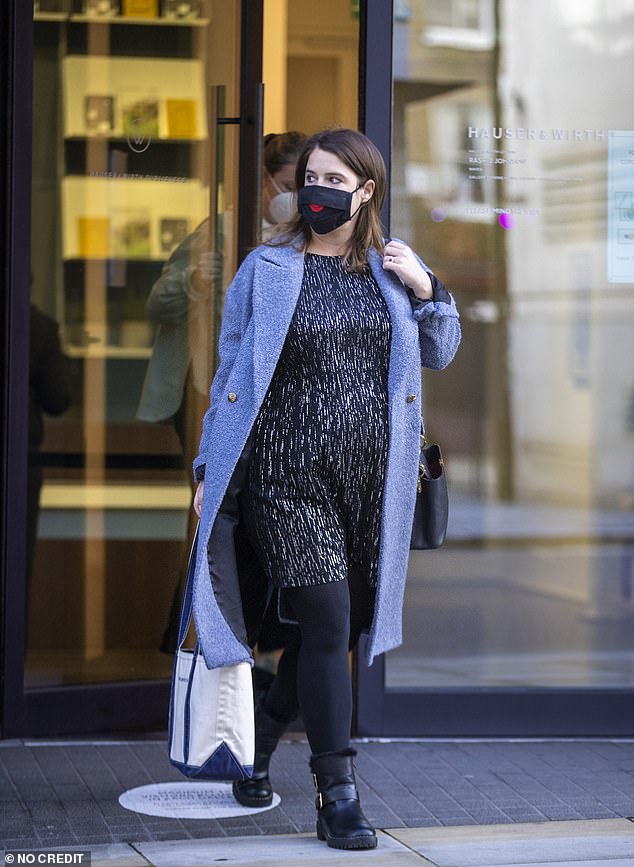 The royal, who announced she was expecting her first child in September, proudly showed off her baby bump

The royal kept her coat open, revealing her blossoming baby bump in a straight cut dress in black and silver.

She chose to complete her look with comfortable biker boots and a black leather cross body bag from Louis Vuitton.

Eugenie has worked at the Hauser and Wirth art gallery in Mayfair for the past five years.

Speaking about her passion for art, she previously said: ‘I’ve loved art since I was little. I knew I definitely wouldn’t be a painter, but I knew this was the industry for me.’ 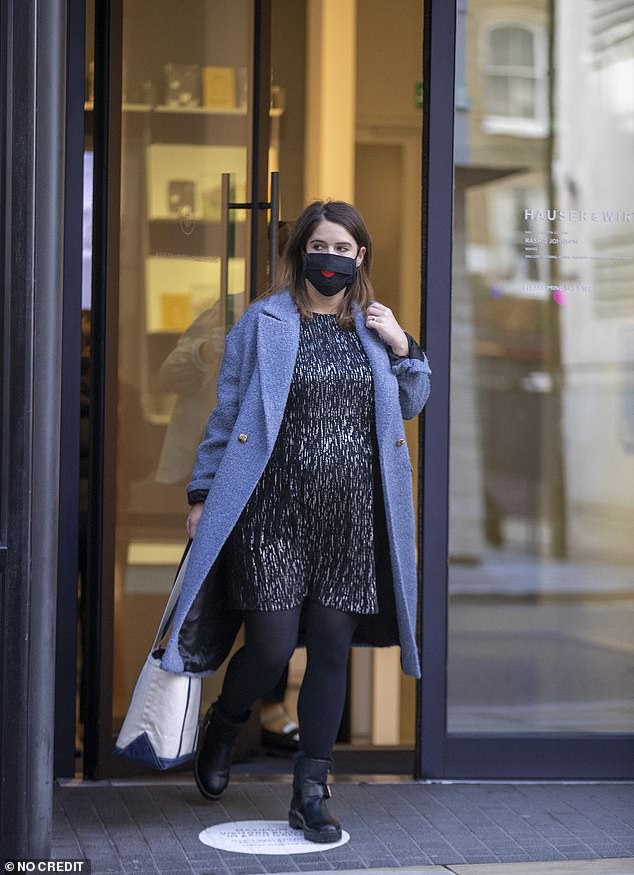 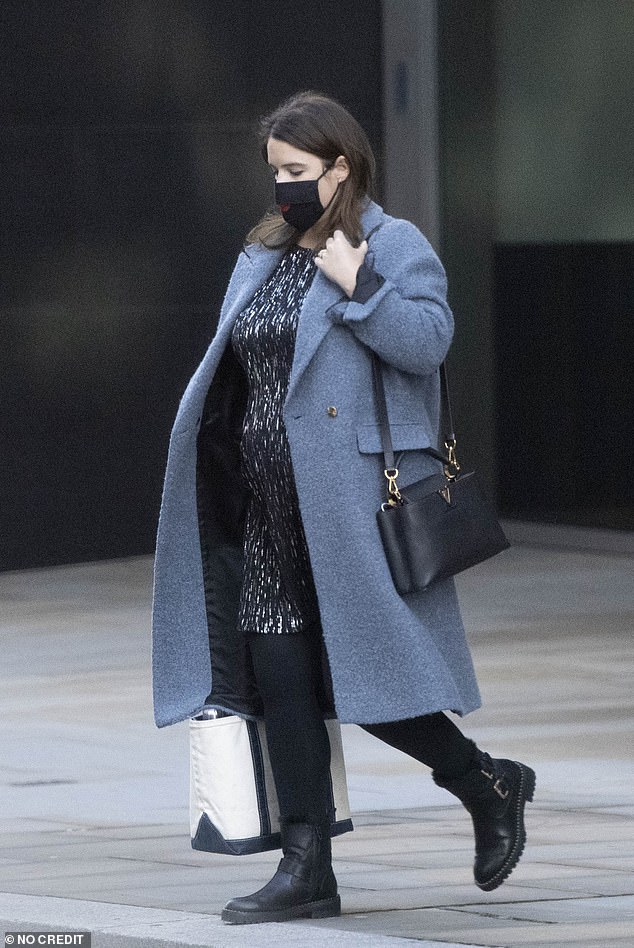 Eugenie was wearing a sparkly dress in black and silver, with biker boots, under a cosy-looking blue coat

Since her pregnancy announcement in September, the royal has been steadily preparing for motherhood, and was even spotting shopping for maternity clothes at Seraphine, which has been favoured by the Duchess of Cambridge during her three pregnancies.

While Eugenie and husband Jack Brooksbank, 34, are currently living in the three-bedroom Ivy Cottage in the grounds of Kensington Palace, Eugenie is expected to spend much of her maternity leave at Frogmore Cottage in Windsor.

The Princess has always been close to her cousin Prince Harry, who has loaned them Frogmore Cottage – a wedding gift from the Queen – while he and Meghan are living in California with son Archie.

Recently, Eugenie  was overcome with emotion as she praised her mother Sarah, Duchess of York, for teaching ‘us how to give back to people’ in a video call to mark the 30th anniversary of the Teenage Cancer Trust. 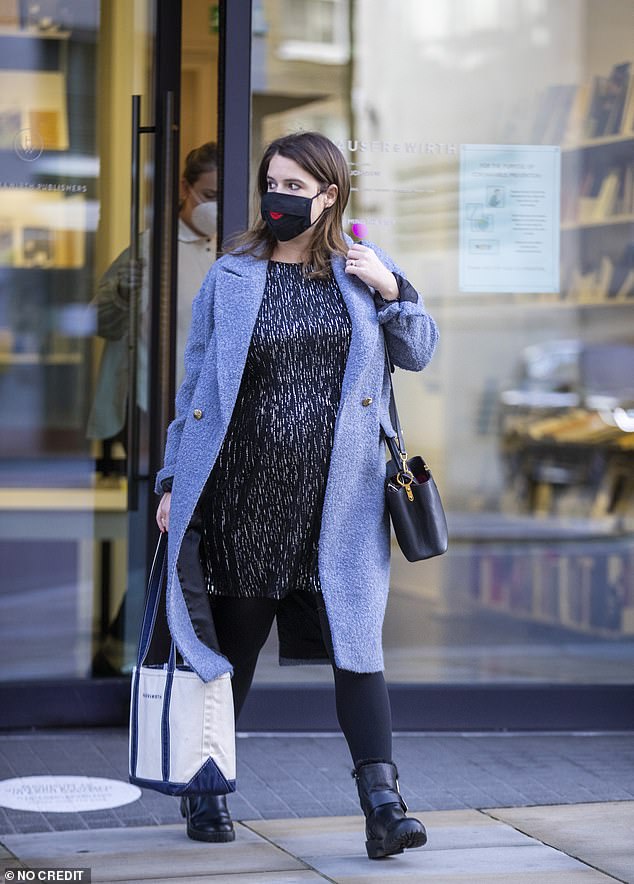 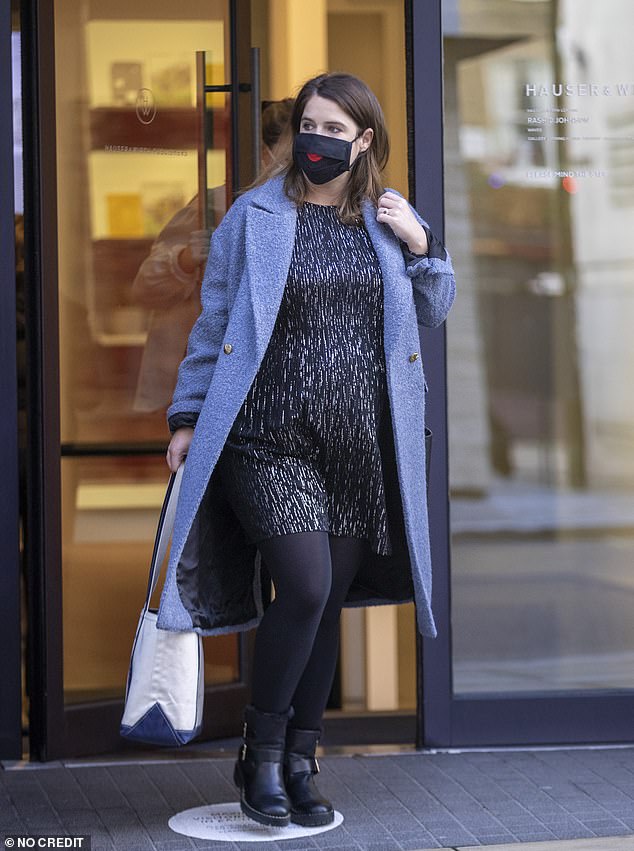 It has been reported the expectant mother had been shopping for maternity clothes at Seraphine, with was favoured by the Duchess of Cambridge during her own pregnancies 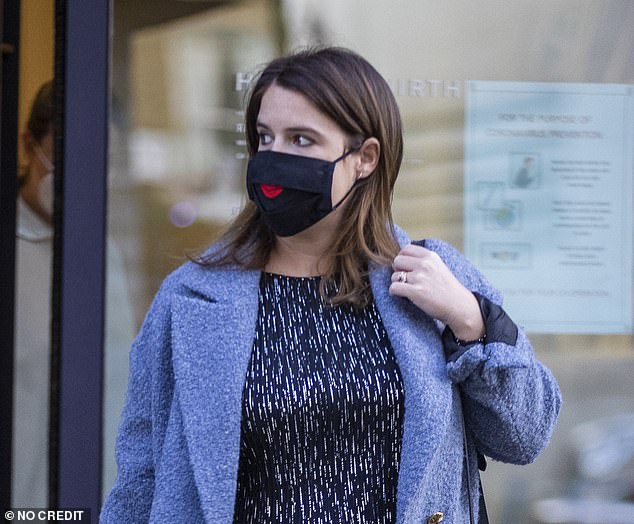 The royal sported just a dash of mascara and eyeliner for her day out, and styled her hair in a neat blow-dry 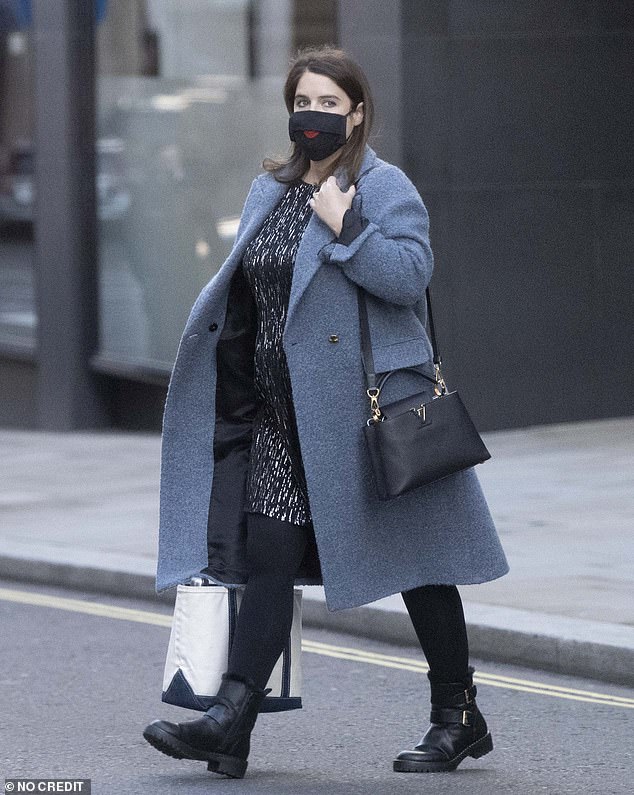 The royal kept her coat open, revealing her expanding baby bump in a straight cut dress in black and silver 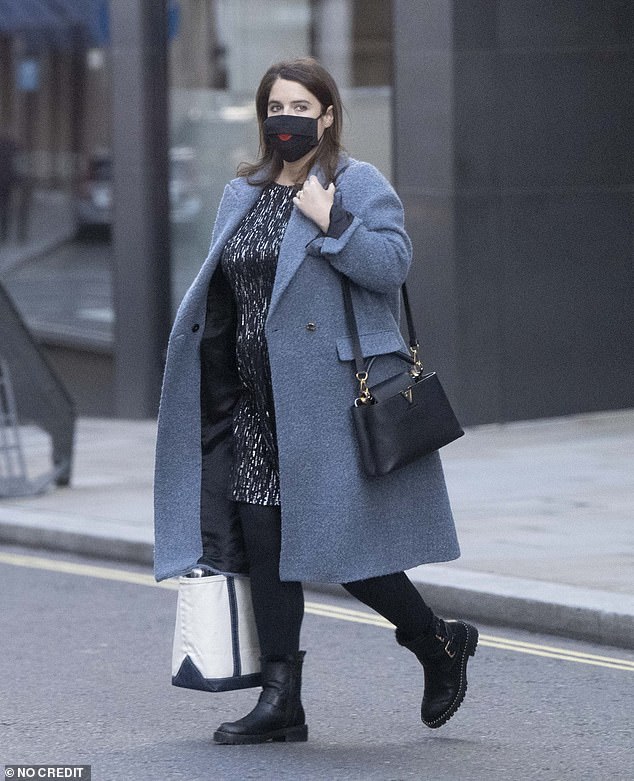 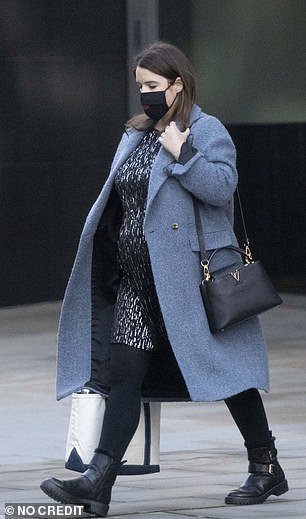 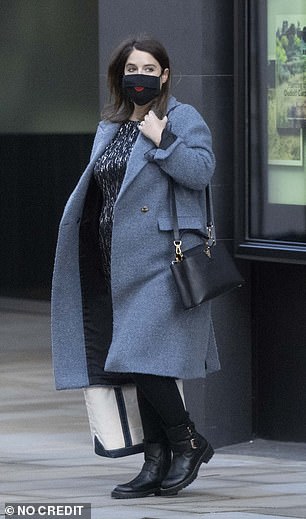 The mother-to-be, pictured, is expecting her first child with husband Jack Brooksbank for early 20201

She had joined her sister Princess Beatrice, 32, in heralding the duchess, 61, for inspiring them to become involved with the charity.

The trio, who are all honorary patrons of the organisation, held the virtual chat with representatives from the Trust and Jane Sutton, the mother of the late famed fundraiser Stephen Sutton.

The duchess, based at Royal Lodge, in Windsor, with her ex-husband Prince Andrew, has been involved with the charity for three decades and opened its first special hospital unit for young people in 1990.

Eugenie was almost moved to tears as she told her mother: ‘We’re very honoured to be here, but we wouldn’t be here unless you had educated us in how we give back to people.’ 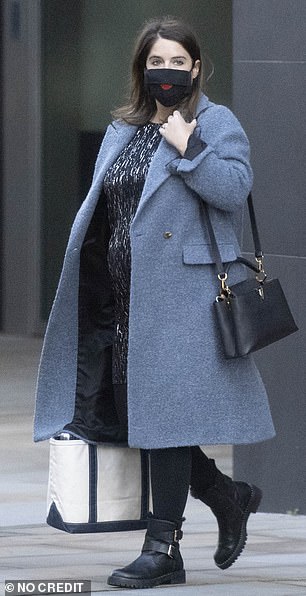 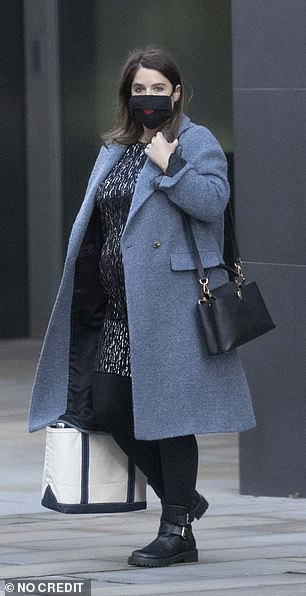 The pregnant royal looked comfortable in the blue woolen oversized coat, from Zara, and the biker boots 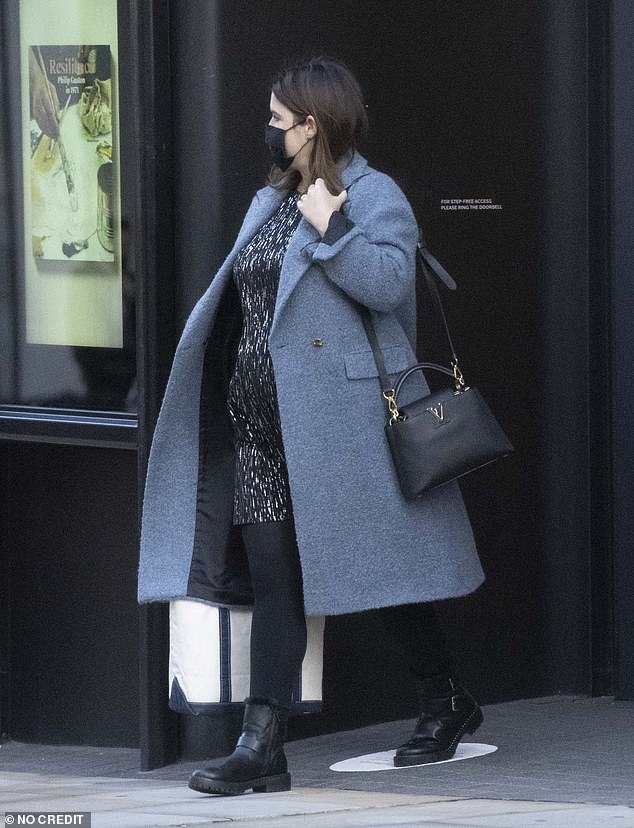 Eugenie stepped confidently out of the gallery. It is throught she will spend most of her maternity leave at Frogmore Cottage 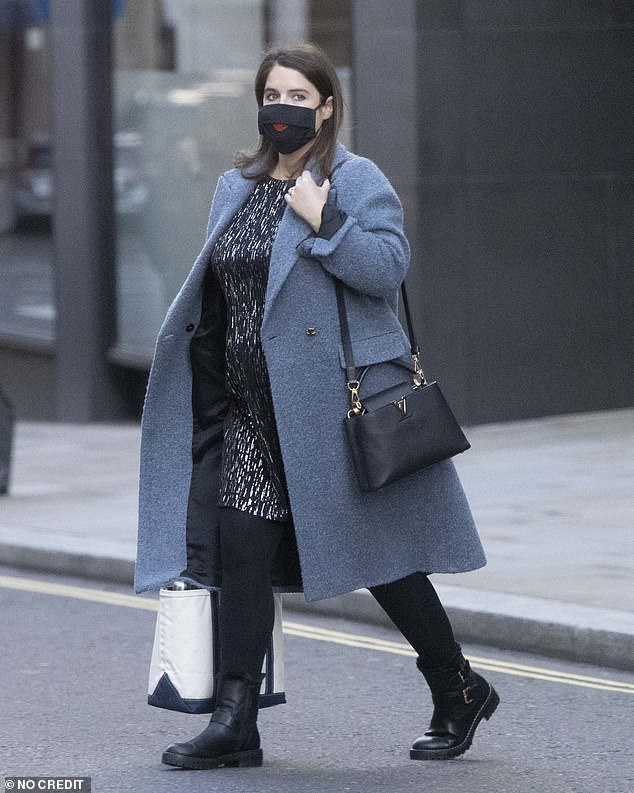 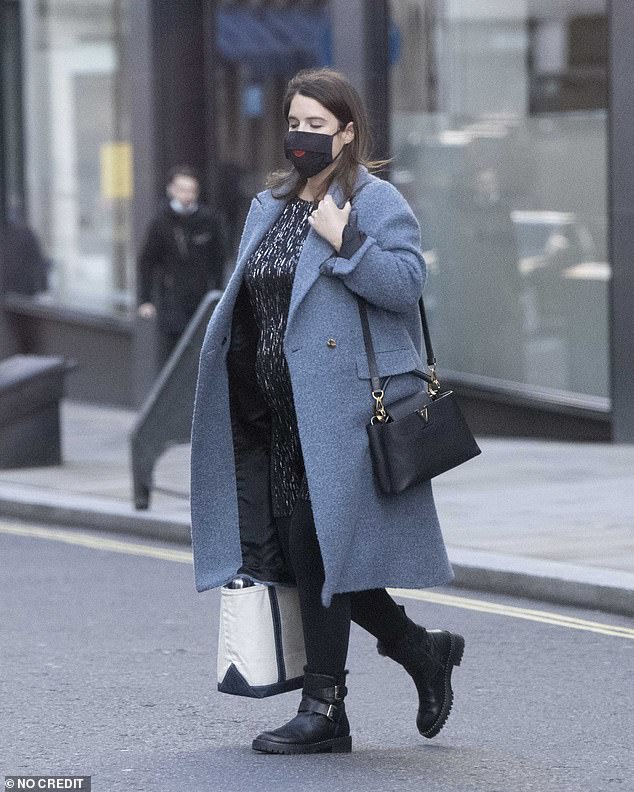 The royal looked relaxed as she headed home in the stylish pregnancy look, carrying a white and blue bag 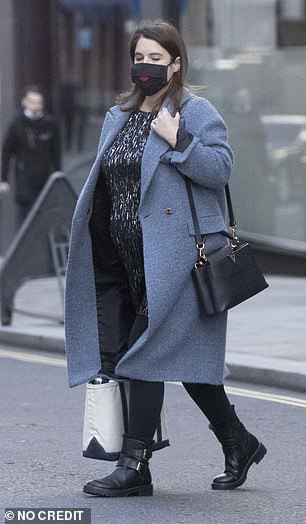 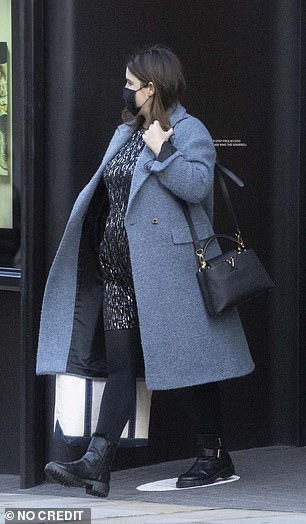