Anne reporting for style duty! Princess Royal looks elegant in a recycled a green coat as she attends the Sovereign’s Parade at Sandhurst

She’s the original recycling royal and today Princess Anne showed off her thrifty credentials once again as she stepped out in a trusty green coat she’s had in her wardrobe since at least 2015.

The Queen’s only daughter, 71, looked elegant as she attended the Sovereigns Parade at Royal Military Academy Sandhurst today in Camberley.

The first commissioning parade of the new RMAS was held in 1948 in the presence of His Majesty King George VI, who decreed henceforth that the parade was to be known as The Sovereigns Parade.

Princess Anne was attending her sixth commissioning parade as the Sovereign’s Representative, while the Queen is at Windsor Castle on light duties – although she hasn’t attended the event for several years, making an appearance with Prince Philip in 2006 for Prince William’s own end of term parade.

The Queen’s only daughter, 71, looked elegant as she attended the Sovereigns Parade at Royal Military Academy Sandhurst today in Camberley

The Queen’s daughter paired the mint green coat with stylish black nubuck knee-high boots with fringes playfully flowing as she walked passed the officers in uniforms.

She also kept her fingers warm with a pair of leather gloves, and was holding a clutch bag with a fringed zipper that matched her boots.

On her hair, which was perfectly coiffed into a neat bun, the Princess wore a brown fur hat to complete the look.

Anne, who is known for a no non-sense approach to fashion, picked discreet accessories, including a tasteful golden pair of drop earrings that glinted in the cold December sun as she arrived in Camberley. 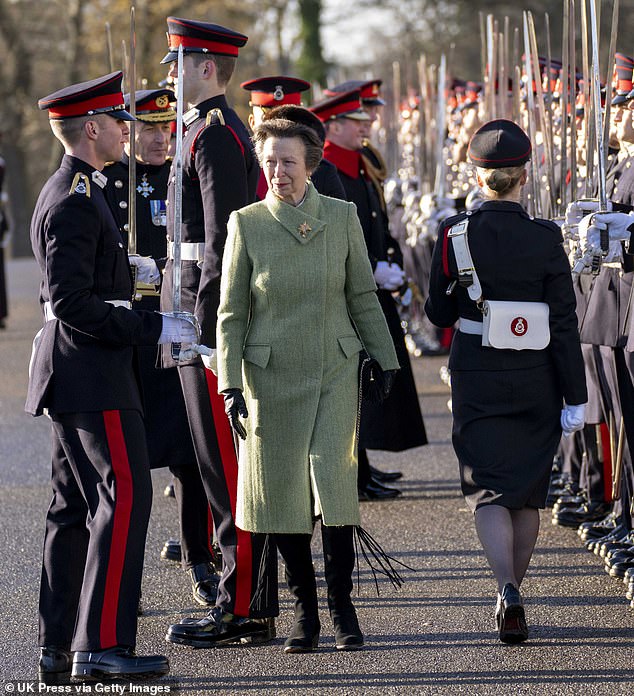 She also pinned a leaf-shaped brooch to the collar of her coat, and seemed relaxed as she was greeted by officers.

The royal, pictured, who received the appointments of General and Air Chief Marshal to mark her 70th birthday in August 2020, reviewed the officers during her visit.

She is involved with more than 300 charities, organisations and military regiments in the UK and overseas.

The Queen has not attended the parade herself since 2006, where she, the late Prince Philip, Prince Charles and the Duchess of Cornwall all watched on as Prince William, then 24, marked the end of his training at Sandhurst.

Last year, it was Sophie Wessex who attended the parade, which takes place yearly in Camberley at the Royal Military Academy.

The Sovereign’s Parade takes place at the end of each term marks the culmination of 44 weeks training and the passing out of Officer Cadets who have completed the Commissioning Course. 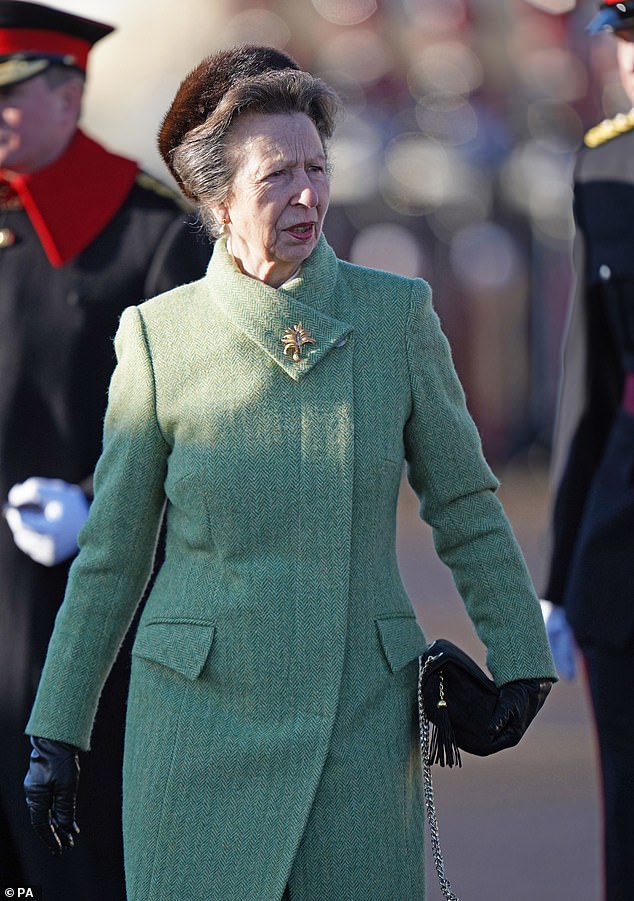 The Princess Royal, pictured, put on a stylish display if Wintery fashion as she stepped out to attend the parade

The first Commissioning parade of the new Royal Military Academy Sandhurst was held in July 1948 in the presence of His Majesty King George VI, who decreed henceforth that the Parade was to be known as The Sovereign’s Parade.

The original Royal Military Academy (RMA) was established at Woolwich for the training of Artillery and Engineer officers in 1741.

Cavalry and Infantry officers were trained at the Royal Military College (RMC), which was founded in 1802 and moved to Sandhurst in 1812.

The RMA and RMC merged after WW2 and formed the current establishment: the Royal Military Academy Sandhurst (RMAS). 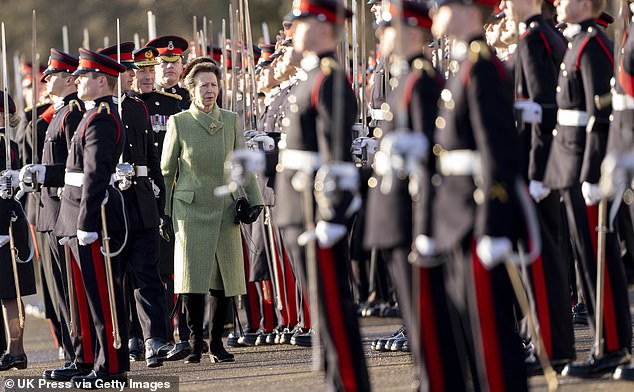 Princess Anne is involved with more than 300 charities, organisations and military regiments in the UK and overseas 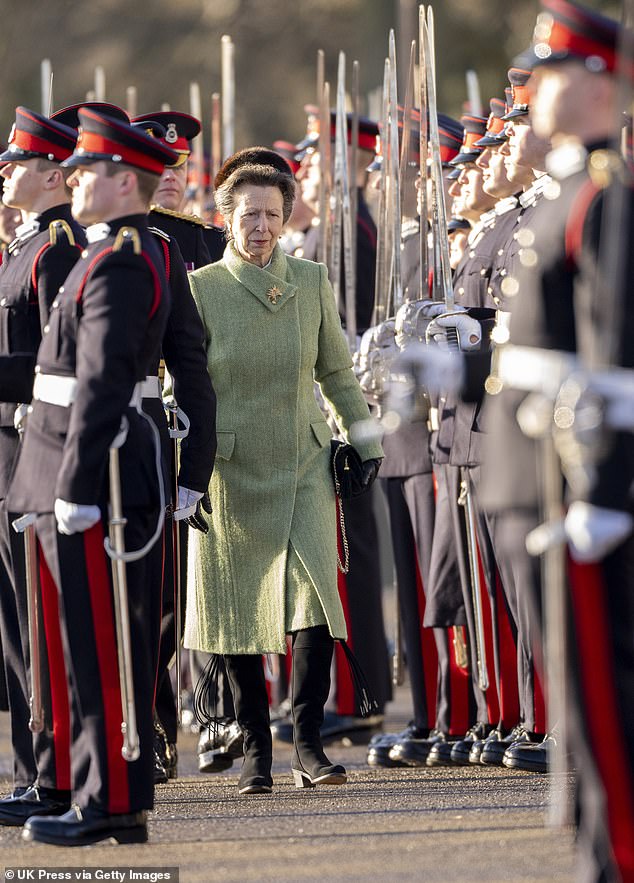 The royal, pictured, who received the appointments of General and Air Chief Marshal to mark her 70th birthday in August 2020, reviewed the officers 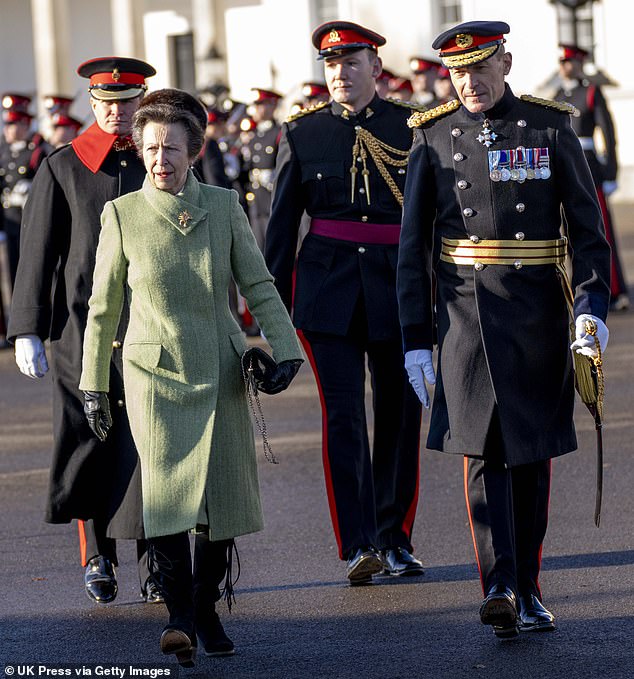 The princess Royal donned a favourite coat she’s owned since 2015 for the occasion, and paired with black accessories

The Queen has taken a step back from her royal duties on the advice of her doctor in October.

So far, the Queen has continued to carry out her duties as Head of State, despite having to ‘reluctantly’ cancel a number of high-profile engagements this autumn, with senior royals stepping up to stand in her place.

The Monarch is still receiving her daily red boxes of Government documents. But concerns over her health have sparked worry about what should happen if she is no longer capable of performing her royal duties. 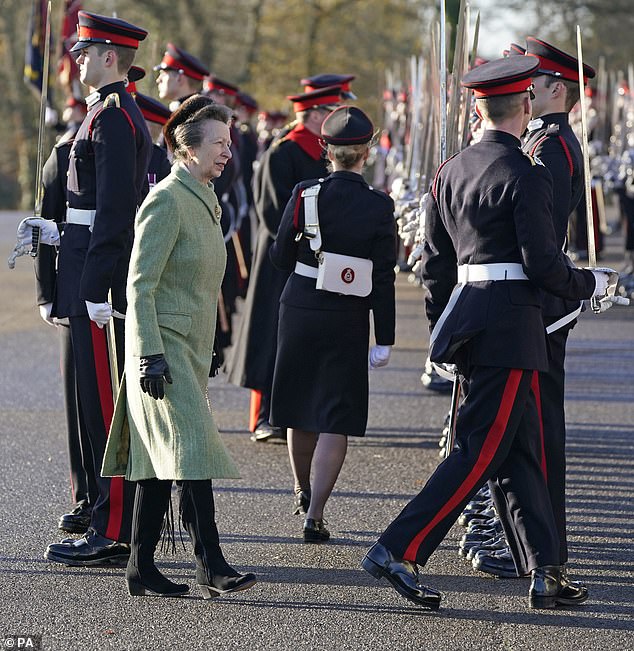 It is the sixth time that the Princess Royal is presenting the Queen at the parade. The Monarch has not attended since 2006 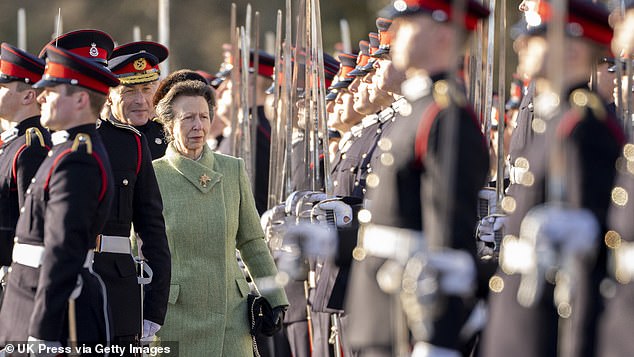 The Queen has taken a step back from her royal duties on the advice of her doctor in October, and Anne, pictured, has been among the members of the royal family who have stepped up to represent the crown at events

Anne put on a stylish display for the event today, and was the picture of poised in her green coat, black gloves and black boots 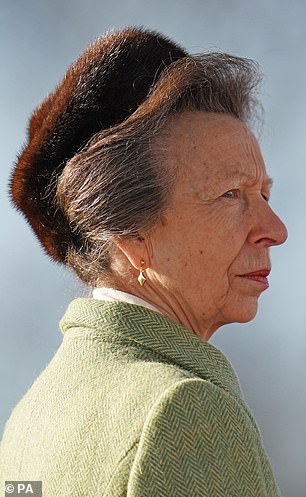 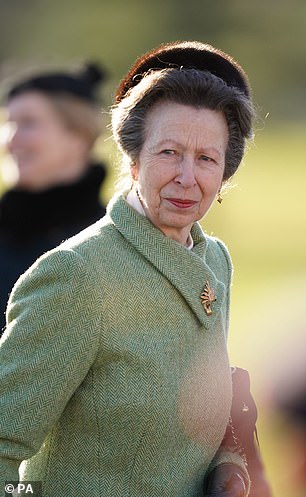 The Princess Royal’s hair was perf3ectly coiffed into a neat bun and she was also wearing a fur hat. She also opted for a tasteful pair of golden drop earrings

Under rules enshrined in law and detailed on the official Royal website, four members of the family are currently entitled as ‘Counsellors of State’ to take over from the Queen if she is unable to perform her duties – if, for example, she were abroad or unwell.

These Counsellors are Prince Charles, Prince William, Prince Andrew and Prince Harry, chosen because they are the four next in line to the throne and at least over the age of 18. This rules out William’s children George, Charlotte and Louis.

But neither Prince Andrew – who is fighting sex claims lodged in the US – nor Prince Harry, who has quit official duties and now lives in California, are currently working members of the Royal Family. 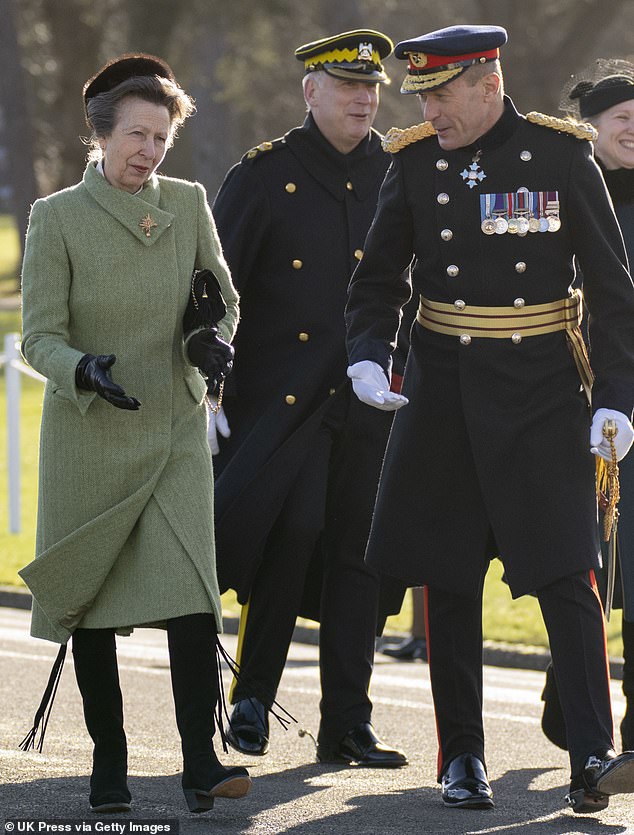 Anne looked in great spirits as she made her way to the parade, which marks the end of training for the recruits 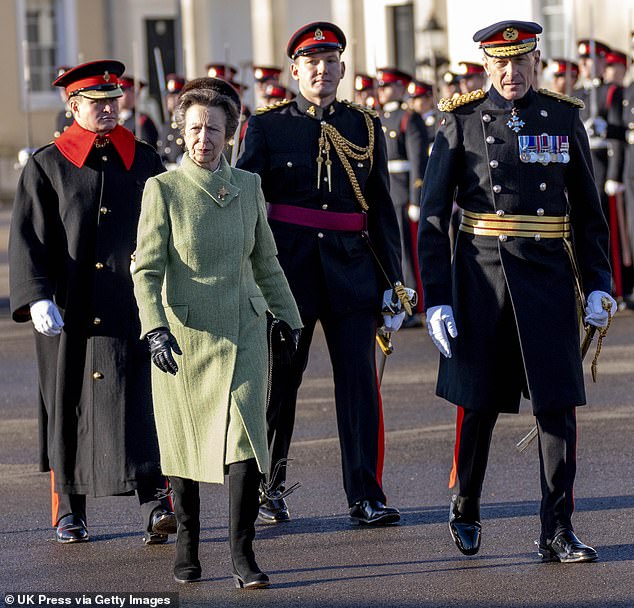 Anne, who is a Sovereign’s representative, was welcomed to the sound of windpipes as she arrived, pictured

The first parade, pictured, took place in 1948 in the presence of His Majesty King George VI, who decreed henceforth that the Parade was to be known as The Sovereign’s Parade