Public sector workers will be offered a 2.5 per cent pay rise plus a productivity sweetener in a new wages policy announced as part of the WA mid-year review.

The $1.2 billion policy replaces the McGowan government’s $1000 pay increase cap introduced after its election in 2017 and comes one year earlier than promised at the 2021 state election. 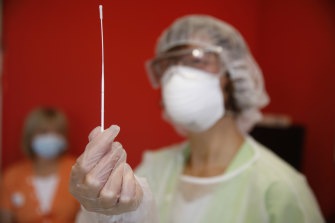 A COVID test and isolate payment will be made available for people who take time off work while waiting for their PCR test results.Credit:AP Photo/Jean-Francois Badias

WA Premier and Treasurer Mark McGowan said the state could offer the increase because its financial position was stronger than it had been in decades.

“It’s a fair and reasonable measure to ensure that we properly reward the workforce without breaking the budget,” he said.

Under the policy, WA’s 150,000-strong public sector workforce will be offered a 2.5 per cent wage increase per annum over the next two years plus the choice of either a one-off $1000 payment or an additional 0.25 per cent per annum.

The policy will cost the government $1.2 billion over four years with the mid-year review putting aside $560 million this financial year.

Unions WA wanted either a 4 per cent pay rise or $2500 per annum increase, however, secretary Owen Whittle welcomed the pay rise but wanted further details.

“We’re still yet to see the finer details of the framework, these details are going to be very important about how or whether unions accept the wages policy,” he said.

The mid-year review revealed that the state’s iron ore revenue has been dented by a sharper than expected fall in iron ore prices in just three months since the state budget – from a predicted average of $US121.3 per tonne to $US104.9 per tonne.

That drop has resulted in a downward revision of the expected surplus from $2.8 billion to $2.4 billion, partially offset by increased payroll tax and stamp duty revenue.

Mr McGowan said if the price averaged $US77 per tonne for the remainder of the financial year the new prediction would hold steady.

The iron ore price is currently sitting at about US$109 per tonne and Mr McGowan said predicted prices remain at about US$66 per tonne over the forward estimates.

“We have been very, very conservative in our iron ore forecasting, so that’s a good thing. You should underestimate the price so that any risk is upside,” he said.

Mr McGowan also announced $430 million in extra state and Commonwealth funding for Metronet projects, which he said were experiencing cost pressures because of materials and changes in scope.

Central to the mid-year review was extra spending on health and COVID measures ahead of the state’s border re-opening on February 5.

West Australians who need to take time off work while they await COVID test results after the borders drop will be able to apply for a $320 payment from the state government.

$80 million has been designated for the assistance, which equates to 250,000 individual payments.

Similar payments are available in other states including Victoria, which offers a $450 payment to workers isolating while waiting for test results.

The payment is only available to workers who have not received any income during the self-isolation period and those who have exhausted or not been entitled to any sick leave.

The WA government has come under intense pressure from health unions and the public over poor management of health system funding, which has led to staffing and bed shortages.

Resourcing issues have also led to concerns about WA health system’s ability to deal with COVID once it enters the state.

“These improvements we are making to the health system are equivalent to bringing online a new hospital – with an additional 530 beds being delivered around the state,” he said.

About $256 million will be spent on COVID-19 activities including hotel quarantine, the Public Health Emergency Operations Centre, the State Health Incident Coordination Centre, the vaccination rollout and pathology testing.

The government will also pump more money into the health system with $240 million in funding on top of previous announcements to be spent on easing health and mental health demand pressures.

Mr McGowan said the funding would bring total COVID, health and mental health funding announced this year up to $3.2 billion.

“As the State prepares to safely transition, we are putting in place additional support to prepare the health system and bolster our responses to COVID-19, including vaccination and contact tracing,” he said.

The mid-year review also incorporates funding to contract an operator to commission, fit-out and run the Bullsbrook quarantine facility being built by the Federal government.

About $17.6 million will be spent on fixing the long-stay hospital bed problem where elderly patients and patients awaiting National Disability Insurance Scheme services will be able to be transferred to community health settings at the end of their hospital stay.

Shadow Treasurer Steve Thomas said the mid-year review statement highlighted the fiscal gift the McGowan government had been handed but was squandering.

“This is yet another Treasury report demonstrating that the McGowan government has received a mountain of cash, yet it has failed to maintain services like health and housing, and it has utterly failed to take advantage of the boom times to prepare us for the next downturn,” he said.

Dr Thomas also warned that WA was heading toward a downward cycle, as evidenced by the drop in the iron ore price.

“The projected average iron ore price for 2021-22 has been dropped from US$121 to US$105 in the three months since the budget, and it is expected to continue to decline” he said.

“The boom-and-bust cycle that the WA economy is stuck in only gets smoothed out when a forward- thinking government uses a boom to diversify the economy and insulate it from future busts” Dr Thomas said.

“Most importantly boom periods should be used to get the government’s bureaucratic foot off the hose of commercial and industrial development.

“The complete failure of the McGowan government to even initiate a discussion on economic reform during the biggest financial boom in our history is a disgraceful misuse of the wealth raining down on it and into the Treasury’s coffers.”