The federal government has reached a settlement with victims of the botched so-called "robo-debt" welfare debt recovery scheme on the morning of a scheduled trial.

In a brief hearing in the Federal Court in Melbourne on Monday, lawyers for Centrelink recipients who had been forced to pay back money under the "unlawful" scheme said the parties had reached an agreement. 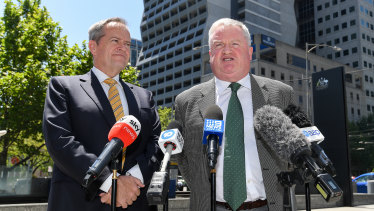 Gordon Legal’s Peter Gordon (right) led the class action against the government on behalf of welfare recipients who were unlawfully forced to repay money.Credit:Justin McManus

The robo-debt scheme was scrapped in May, with the Commonwealth announcing it would pay back $721 million to about 373,000 people.

Class action firm Gordon Legal, which is running the class action, said if the settlement was approved by the court then $1.2 billion in total would have been delivered to participants in the legal challenge since it started, including $112 million in compensation. The government also agreed to drop $398 million in claimed debts, Gordon Legal said in a statement.

In June, Prime Minister Scott Morrison apologised for any "hurt or harm" people suffered as a result of the government's scheme after it announced it would refund every alleged overpayment it had collected under the discredited system of income averaging.