SARAH VINE: The High Street bloodbath won’t stop us shopping till we drop

As Alanis Morrisette once sang: Isn’t it ironic? On the day England is finally released from lockdown, and we can hot-foot it to the nearest town for some non-essential shopping therapy, two of the biggest names in British retail go under.

The double demise of Philip Green’s Arcadia group and Debenhams, putting more than 25,000 jobs at risk, is just the latest convulsion in the long, drawn-out death of the British High Street.

Lockdown has pushed these ailing businesses over the edge, and the result will be misery for the thousands of staff whose livelihoods and pensions are at risk. In a terrible year, when fear has stalked the land, they now face an anxious Christmas. It’s a tragedy.

Yet you can guarantee that tomorrow’s news reports will be full of pictures of eager shoppers diving into Christmas with abandon. Clothes, gadgets, books, perfume — bring it on! 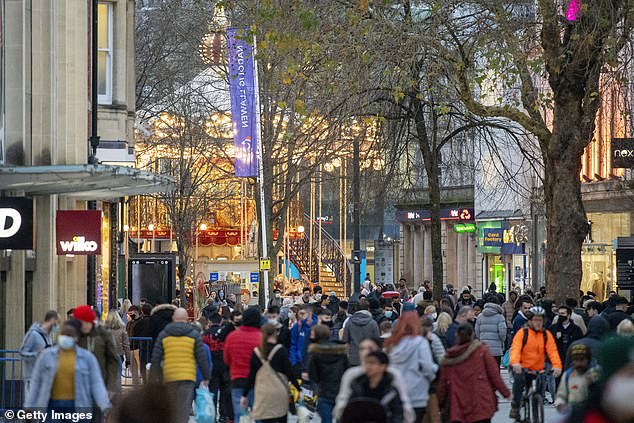 The double demise of Philip Green’s Arcadia group and Debenhams, putting more than 25,000 jobs at risk, is just the latest convulsion in the long, drawn-out death of the British High Street. Pictured: Cardiff’s Queen Street which is not under lockdown

Because the truth is, Britain hasn’t fallen out of love with shopping. In fact, retail sales are surprisingly buoyant, having increased 1.2 per cent in October for the sixth consecutive month (according to the ONS), and up almost 6 per cent year-on-year.

It’s just that the way we like to shop has changed. This is the latest stage in a process that began more than a decade ago with the collapse of Woolworths.

Exacerbated by lockdown, online shopping has tightened its grip on the nation. Not only that, it’s become more efficient. Parcels arrive in precise time-slots; delivery is quick and painless. I now share a regular joke with my postman about the number of packages that arrive for my daughter, full of £1 second-hand tops from eBay or Debop.

Our smartphones allow us to track parcels in real time, managing incoming purchases with the precision of an air-traffic controller. Whether it’s a fridge-freezer or a fancy frock, we’re in control. 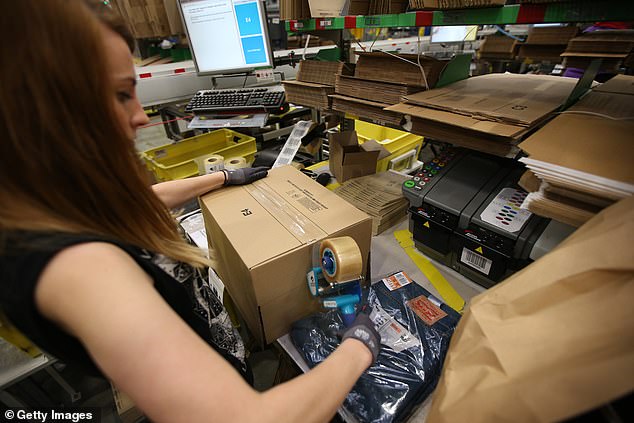 Exacerbated by lockdown, online shopping has tightened its grip on the nation. Not only that, it’s become more efficient. Parcels arrive in precise time-slots; delivery is quick and painless. Pictured: An Amazon warehouse in Hemel Hempstead 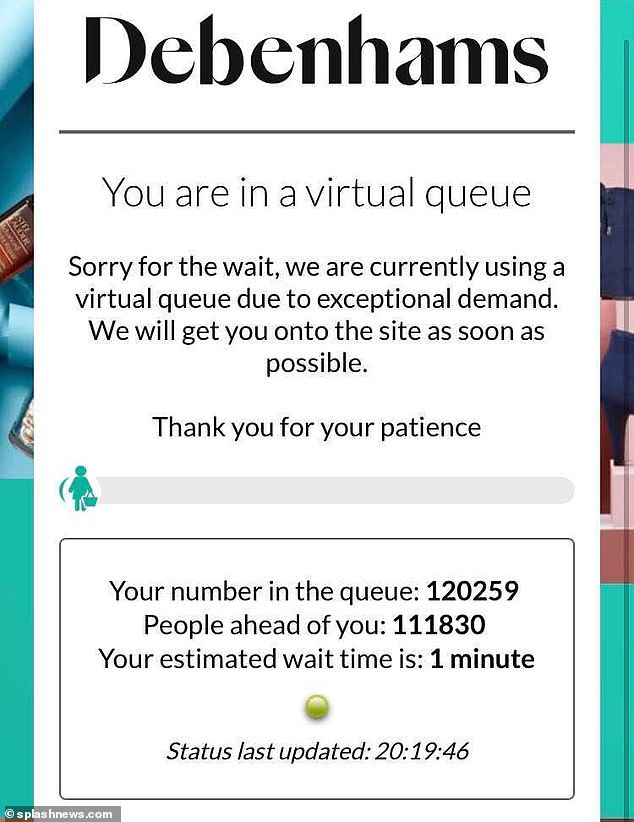 And that, I think, is the key. Once large department stores and fashion chains had the monopoly on goods, limiting access through closed supply chains. We bought what they sold because we didn’t have a choice.

Now, thanks to the internet, the world is our department store, streaming straight into our homes. No more snooty sales assistants, dodgy changing room lighting and the worry of going over the time limit in the car park. It is, literally, open all hours.

But all is not lost. The internet has not quite won. There is still something about the hunter-gatherer experience of physical retail that I don’t think we’ll ever grow weary of. However efficient the online experience becomes, it can’t beat the joy of being there. Of trying something on and knowing you have to have it.

Of sharing the excitement with a friend of having found your 927th pair of perfect black trousers, preferably over a restorative cup of tea and a slice of cake afterwards.

Because shopping is so much more than simple acquisition. And however much Amazon and the like can fulfil our daily needs, they can never replace the human dimension. Which is why, pandemic be damned, the high streets of Britain will be heaving once more today — and long into the night.

I’m not Hugh Grant’s biggest fan (nor he mine: he was once spectacularly rude to me at a party); but he was damn good in The Undoing, which reached its feverish conclusion on Monday.

He showed a range and depth I would not have given him credit for. Not least because, unlike co-star Nicole Kidman, he can move his face.

But the standout star was Italian actress Matilda De Angelis (below), who dominated the screen with a luscious, almost menacing beauty. 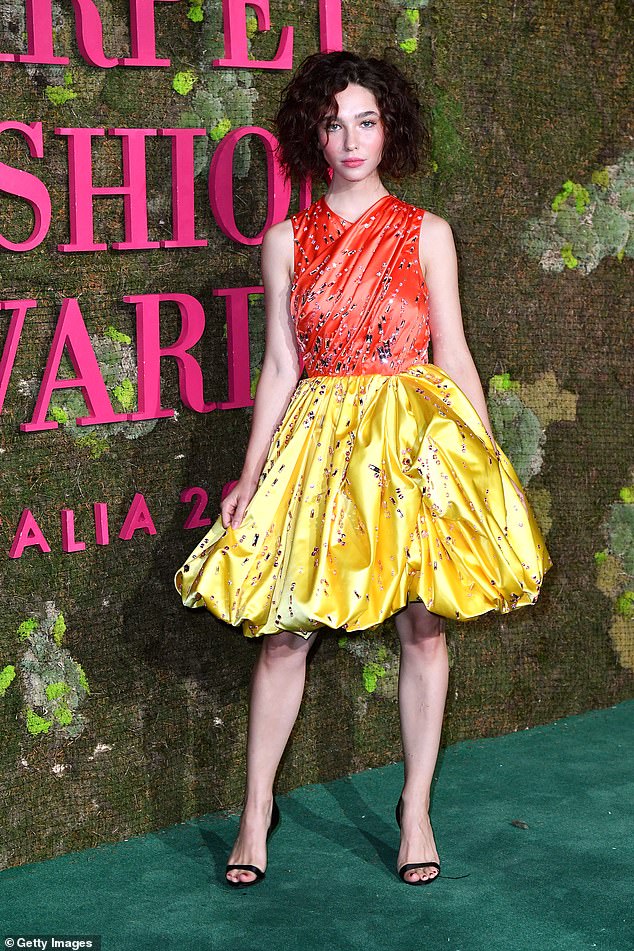 It seems Covid has turned us into a nation of slobs. A quarter of Brits say they no longer bother to shower daily, on the basis there’s no point.

Losing interest in one’s appearance is, of course, a sign of depression. Time to reclassify nail bars and hair salons as mental health services? I’m not joking.

I feel for Joe Biden, who’s fractured his foot while playing with his dog, Major (below). Years ago, I was walking my late Jack Russell, Mars, when he had a squirrel moment.

Off he went, and over I went, breaking my arm in two places. A world of pain. But that’s dogs for you. Wouldn’t have it any other way. 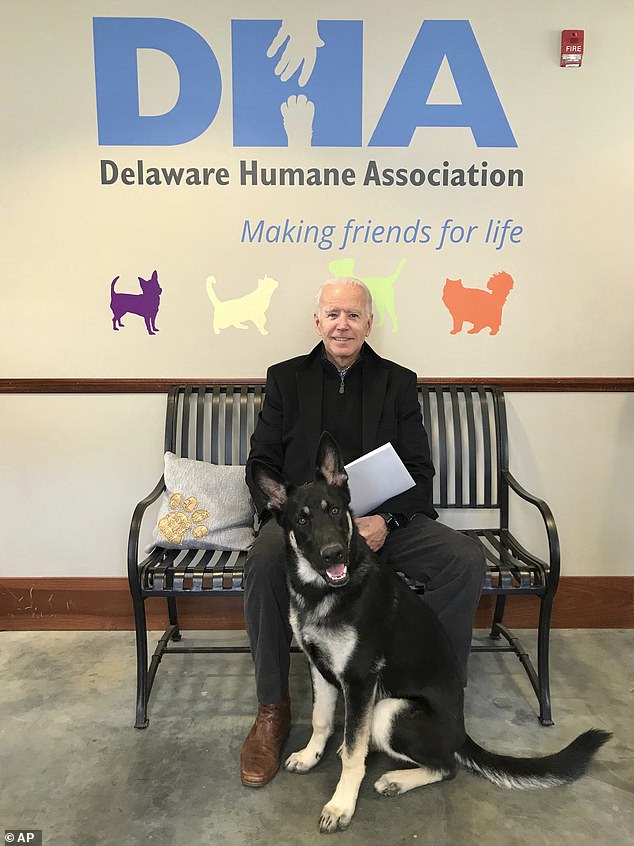 Finally some good news: the Tavistock and Portman NHS Foundation Trust, which treats children and young people experiencing gender dysphoria, has lost its case at the High Court, in which it argued that minors are able to give ‘informed consent’ to undergo hormone treatment.

The case was fought by one incredibly brave woman, Keira Bell, who at the age of 16 was prescribed testosterone treatment and puberty blockers after just three one-hour appointments at the clinic.

She later realised that her desire to become male was not permanent — but by then it was too late: her voice had dropped, she had facial hair and had undergone a double mastectomy.

Of course, hers is not a universal experience, and many individuals who change sex go on to live happy lives, free at last to be who they really are. But growing up is all about experimentation. Children and young people try on all sorts of identities before they become adults and settle on a final path.

It is the duty of a responsible and compassionate society to ensure they don’t make mistakes they will later regret.

Ministers are not having an easy time at the moment — but one is emerging as an unlikely hero.

Gavin Williamson, Secretary of State for Education, has so far resisted calls from unions and other pressure groups to fall in line with Scotland and Wales, take the path of least resistance — and cancel next year’s exams for 16-year-olds.

Williamson did, of course, have a very bumpy ride during the summer, and has much ground to recover.

But if he pulls this one off and sticks to his guns, I — and countless other parents whose children are due to sit their GCSEs next summer — will have to concede that he has scraped a pass mark after all.

Once again, Captain Sir Tom Moore has saved the day — this time by launching his own brand of gin, with all proceeds going to charity.

I honestly can’t think of a better way to drown all the sorrows of 2020, can you? Just the tonic. 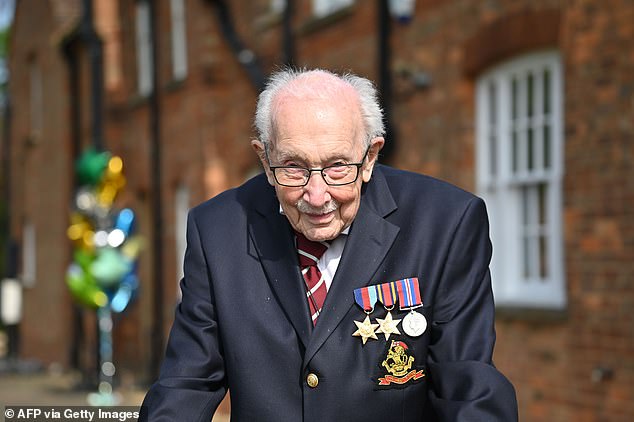 Another middle-aged white man bites the dust: BBC football commentator Steve Thompson has been suspended by the Beeb for using the phrases ‘handbags’ and ‘drama queen’ during a game. I wonder if any senior BBC staff have ever sat in the crowd at a soccer stadium. ‘Handbags’ is really the least of it — you ******* bunch of ******* *******.

As the mother of a teenage daughter, I should be in favour of Scotland making ‘period products’ free.

But, as ever with Nicola Sturgeon, it smacks of populist virtue-signalling at someone else’s (namely taxpayers’) expense.

As does her plan to give every member of the NHS in Scotland a £500 bonus. Exploiting a global health crisis to play Mother Christmas is political game-playing on a whole different scale.

Three households mixing at Christmas is all very well. But family squabbles over who makes the cut will be academic. After all, apart from the Queen, how many of us can fit more than eight people around the dinner table?