A man whose image went viral on social media after he allegedly stormed the Capitol last week wearing a fur outfit and police vest while carrying a plastic riot shield is now facing federal charges. Aaron Mostofsky, the son of a prominent Brooklyn judge, was arrested Tuesday at a Brooklyn home, CBS New York reported. 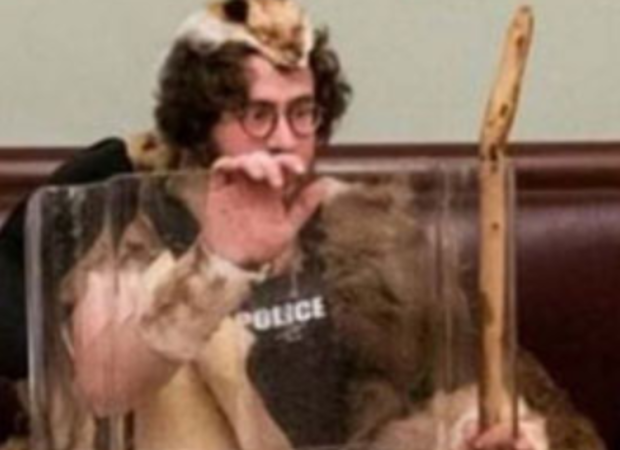 The younger Mostofsky is charged in a federal criminal complaint with felony theft of government property, unlawful entry of a restricted building and disorderly conduct on Capitol grounds with intent to impede government activity.

The criminal complaint cites a New York Post story in which Mostofsky identified himself by his first name to a reporter during the assault, saying, “The election was stolen” and “We were cheated.”

The criminal complaint lists the Capitol Police riot shield and a bulletproof vest as the federal property Mostofsky is alleged to have stolen, valued at more than $2,000. Mostofsky said he found both on the ground, according to the complaint.

It also cited messages Mostofsky allegedly wrote to friends indicating he was at the Capitol during the attack. In one, he wrote to a friend he intended to meet there, “If we find each other look for a guy looking like a caveman.” He also allegedly messaged the friend, “Even a caveman knows it was stolen.”

Motofsky was expected to appear in court Tuesday.

Celebrities
GMB: Katy Rickitt makes awkward World Cup blunderKaty Rickitt, 36, started her Tuesday morning the wrong way, as the Good...
Lifestyle
More On: flaming lips The Flaming Lips are still breathtakingly crazy Miley Cyrus offers her not-so-hot new album online for...
TV & Movies
DANCER and choreographer Emma Portner shot to fame as the wife of actor Elliot Page. However, sadly in January 2021...
World News
Countdown in Auckland's Orewa has been closed for deep cleaning after one of the two possible new Covid-19 community cases...
Beauty
If there’s anyone we trust to dish out skincare and beauty recommendations, it’s Kourtney Kardashian. Back in 2017, the eldest...
Fashion
Amanda Gorman was undoubtedly the breakout star of the 2021 inauguration. As a Harvard grad and the first Youth poet...
Recent Posts
We and our partners use cookies on this site to improve our service, perform analytics, personalize advertising, measure advertising performance, and remember website preferences.Ok