From next March, the city will play host to what’s been billed as “Australia’s first major music and technology festival”.

Titled Sound West, the five-day festival will take place next year from March 30 to April 3, and will feature musical performances, workshops, panels and mentoring sessions from music industry leaders and technology brands.

The festival will culminate in a two-day technology and music conference at CommBank Stadium, home of the Western Sydney Wanderers and Parramatta Eels. 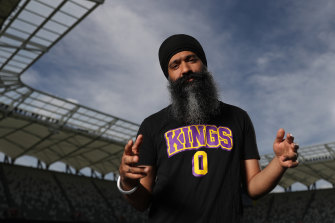 L-Fresh the Lion poses during the Sound West festival launch in Parramatta on Wednesday.Credit:Mark Metcalfe/Getty Images

“As a hip-hop artist, we’re not shy about letting people know about where we’re from. Many of us fly the Western Sydney flag very, very proudly and I’m one of those, so I’m definitely excited for Sound West to be calling Western Sydney home,” he says.

Singh, who grew up in Glenfield (“on the precipice of Liverpool and Campbelltown, the best of both worlds,” he laughs), is among the first lineup of performers and presenters announced for the event, alongside Dylan Alcott, Grammy-nominated producer Khaled Rohaim, and digital artist Serwah Attafuah.

He sees the festival’s announcement as overdue recognition of the outsized artistic contribution that Western Sydney has made to Australian culture in recent years – particularly in the music sphere, where local hip-hop and R&B success stories including OneFour, Hooligan Hefs and Youngn Lipz have put an international spotlight on the region.

“I feel like Western Sydney over-represents when it comes to artistic talent, at a national and now even international level,” Singh says. “What artists from this region have been able to achieve is mindblowing, especially considering the lack of music industry infrastructure out here.

“We’ve definitely been a community that’s had to innovate amongst ourselves and cultivate, produce and develop talent by ourselves for such a long time. But I suppose that’s what you do when you’re presented with a lack of opportunities and a lack of options and you’re passionate about something – you just create despite the barriers.

I feel like Western Sydney over-represents when it comes to artistic talent, at a national and now even international level.

“Now all eyes are on Western Sydney,” he adds. “It’s definitely late but we welcome opportunity and infrastructure as it comes, and hope it continues to amplify what’s happening here and allows people from here to be platformed and showcased at the level they deserve.”

Despite the “first of its kind” credentials touted by Stuart Ayres, the minister for tourism and Western Sydney, at a press conference on Wednesday, similar music festivals and conferences do exist around the country including BigSound in Brisbane. However, Sound West’s focus on the “intersectionality between music and technology” offers something different, says Singh.

“It’s something we don’t really think about that much, how artists really innovate in the tech space and push the boundaries and possibilities of what’s doable in that space,” he says.

Western Sydney’s rising hip-hop and R&B stars, who achieved much of their success through a DIY approach on platforms such as Soundcloud and YouTube, also offer testament to such innovation. “For us to be able to explore that at the festival, I think it’s really exciting,” Singh says.

In much the same way that Western Sydney’s multicultural communities have so solidly diversified Australian hip-hop, Singh believes the festival’s roots in Western Sydney can provide similar opportunities to address conversations around a lack of diversity and representation that have increasingly plagued industries such as music and technology.

“I’ve been saying for years in terms of the music industry, bring your stuff to Western Sydney because we’re the most diverse region in the nation!” Singh says.

“You’ve got potentially your next music manager here, your next A&R person, your next PR person writing the stories about people from the region – you’ve got a multitude of people here who could really benefit the industry as a whole as we’re trying to solve that issue of a lack of diversity in these spaces.

“So I think that’s what I’m hoping for with Sound West,” he adds, “is a much deeper and richer connection with the region and what that means for those emerging in these spaces.”