Tom Holland himself is unaware of what his future as Spider-Man looks like. But Holland does know which Marvel actor he wants to work with next outside of the Marvel Cinematic Universe; Chris Evans. And their dynamic would be quite different than their characters’ relationship in the MCU.

Tom Holland, Zendaya, and Jacob Batalon took a Buzzfeed quiz during the Spider-Man: No Way Home press tour to find out which character from the movie they are. One of the questions in the quiz made the actors pick an MCU actor to star alongside them in a romantic comedy. Their options were Elizabeth Olsen, Tessa Thompson, Florence Pugh, Chris Evans, Simu Liu, and Tom Hiddleston.

Tom Holland and Chris Evans never shared the screen much after Captain America: Civil War. But even in the third Captain America film, Peter and Steve were on different sides of the fight. There’s no doubt that it would be exciting and fun for fans to see the two actors star in a rom-com together. So, perhaps, Hollywood will work its magic and make this hypothetical film a reality. 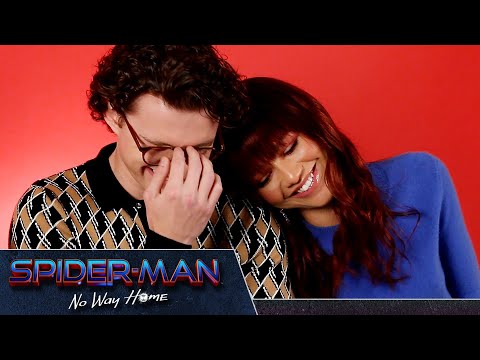 Which ‘Spider-Man: No Way Home’ character is Tom Holland most like?

After answering a few more questions, the quiz revealed which Spider-Man: No Way Home characters Tom Holland, Zendaya, and Jacob Batalon are most like.

In the end, none of them got the characters they play. Holland’s results showed him that he is May Parker, played by Marisa Tomei. And Zendaya is Doctor Strange, played by Benedict Cumberbatch, while Batalon is Happy Hogan, played by Jon Favreau.

It’s a bit heartbreaking seeing Holland get Aunt May after seeing Spider-Man: No Way Home. In the film, Peter’s parental figure dies at the hands of Green Goblin. The scene is one of the movie’s standout moments, and Holland’s performance as he holds Aunt May’s dead body in his arms has been praised by fans and critics alike.

What are Marvel’s future plans for the Spidey actor?

At the end of Spider-Man: No Way Home, Tom Holland’s character gets a crappy apartment, dons a new, epic suit, and continues his duties as Spider-Man. And meanwhile, the rest of the world, including MJ, Ned, and Happy, have no idea who Peter Parker is.

The ending leaves Peter’s future up to interpretation. And while Holland has recently been very secretive when asked about his continuation in the MCU, we now know that Marvel Studios and Sony Pictures are trying very hard to make more Spider-Man films together.

Marvel Studios President Kevin Feige told The New York Times, “Amy [Pascal] and I and Disney and Sony are talking about — yes, we’re actively beginning to develop where the story heads next, which I only say outright because I don’t want fans to go through any separation trauma like what happened after Far From Home. That will not be occurring this time.”

Amy Pascal, the producer of Spider-Man: No Way Home, added, “At the end of the movie we just made, you see Spider-Man make a momentous decision, one that you’ve never seen him make before. It’s a sacrifice. And that gives us a lot to work with for the next film.”