To be alive today is to understand that tiny corners of the internet can, at any given moment, explode with very little warning to become a volcano of red, hot, highly contentious content.

A gold and white dress that might also be blue and black, for example. And more recently, Bad Art Friend, the New York Times article about one woman’s kidney donation, a Facebook post and the subpoenaed gossipy group texts.

And then of course, Couch Guy, the TikTok clip that’s become the subject of viral cheating speculation since it was posted to the platform on September 22.

For those born before 2005, a recap: A US woman, Lauren Zarras, decided to film herself surprising her boyfriend at college. In the video, when she enters the room, her boyfriend can be seen, seated on a small couch, next to three other young women. As he makes eye contact with said girlfriend, he immediately bows his head, puts down his drink and appears … a little underwhelmed to see her. If the phrase “I guess?” was a person, it would be this guy. He slowly rises to hug her and the clip ends.

This clip – lasting no longer than 20 seconds – has since been viewed 61 million times and counting. The reason is the inscrutable nature of the guy’s reaction, which viewers – for we are all viewers, now – interpreted as far too low-key.

Why did he not display the behaviours we’ve come to expect from filmed content? Where were the tears? The hands over the mouth, followed by the long, drawn out “OOohhhhh myyyyy goddddd??!!!” Where was the Ryan Gosling patented move of picking up and spinning around the girlfriend? Couch Guy gave us none of these and so the internet jumped, as swiftly to suspicion. 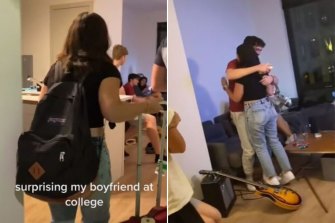 The ‘Couch Guy’ clip has been viewed more than 60 million times. Credit:TikTok/laurenzarras

Though Couch Guy, also known as Robbie, did protest, along with his girlfriend, that there was nothing untoward, the footage had already gone viral and was being combed for clues, and with it, came questions. Is he cheating on her? If he is cheating, is it with one or two or three of the ladies on the couch? Did one of them throw his phone back to him when his girlfriend arrives? Did he have a woman’s hairband on his wrist? These questions, in their literal millions, have been hotly debated.

It’s a familiar social media merry-go-round. Last month, slow-motion footage from the Venice Film Festival of actor Oscar Isaac looking over to his co-star Jessica Chastain on the red carpet had a similar response. While promoting their TV series, Scenes from a Marriage, Isaac can be seen playfully sniffing her armpit. At normal speed, it looks like two old friends goofing around (the actors met at university). But slowed down it appears as if Isaac wants to ravish her with his eyes. As they are both married – to other people – and Isaac, in his tux, resembled a professorial George Clooney, the internet went bananas. The five-second moment was so thoroughly analysed and so widely shared, Chastain had to issue an explanation on morning television.

“Because of reality TV and social media and podcasts, we’re used to getting insight – or perceived insight – into people’s lives and figuring out their drama,” says Sydney psychologist Samantha Symes. We’ve always had strong opinions about people’s behaviours, but we’ve never had this kind of access or intimacy before.”

We’re also actively encouraged to air our opinions. Comment sections, social media and Gogglebox can attest to that. Everyone is a psychologist now, says Symes. Even in the case of one woman’s private moment with her boyfriend?

“Everyone has opinions about anything and everything, whether they know who they’re talking about or not. It’s just now there is a platform to make what may have been private thoughts public, often anonymously, which makes it more tempting,” Symes says.

And while restrictions may be easing now, our months inside haven’t helped. “We’re all getting a bit bored in lockdown, so we’re spending more time looking into things we might normally skip over,” she adds. “We’re all at home, we’re maybe a bit cranky, a bit restless, feeling a little negative and there’s no office kitchen to gossip about co-workers in; there are no neighbours to be critical of, so we’re turning to people online.”

Still, Symes says: “Controversy and opinions, will always have a platform.”

But as we know by now, this is the internet, where cultural trends move at lightning speed. Yes, Couch Guy has dominated for longer than usual, and it’s been both baffling and hilarious, but by next month, there will have been a slate of new viral moments demanding the world’s attention and being ludicrously picked apart for entertainment.

In a strange turn of events, the wisest words may have come from Couch Guy himself, posting on TikTok: “Not everything is true crime … Go get some fresh air.”