A controversial couple indicted on weapons charges for brandishing guns at anti-racism protesters over the summer have sued the news photographer who captured the incident.

Mark and Patricia McCloskey have been charged with felony unlawful use of a firearm and tampering with evidence after waving an AR-15-style assault rifle and semiautomatic pistol at Black Lives Matter protesters from the front patio of their St. Louis home in June.

A photo of the incident went viral, and the McCloskeys have been widely defended by gun lovers who claim the couple were protecting their home. President Donald Trump, who has characterized BLM protesters as “terrorists,” has called the prosecution of the McCloskeys a “disgrace.” They were featured in a virtual Trump campaign event and were the headline speakers during the first night of the Republican National Convention.

The McCloskeys have pleaded not guilty to the charges against them, and claim they were defending themselves against trespassers.

The McCloskeys, who work together as personal injury lawyers, filed suit Friday in St. Louis Circuit Court against United Press International photographer Bill Greenblatt, who took a widely circulated photo of them waving firearms at passing BLM protesters. The suit accuses Greenblatt of trespassing to take the photo, which has contributed to their “significant national recognition and infamy,” the St. Louis Post Dispatch first reported.

The suit also accuses Greenblatt and UPI of profiting from “t-shirts, masks, and other items, and licensing use of photographs bearing Plaintiffs’ likenesses, without obtaining Plaintiffs’ consent.”

The McCloskeys are seeking damages and asking the court to bar the use of the photo and to transfer ownership of the photo to them.

The suit comes as UPI was considering a copyright infringement cease and desist order against the couple to stop them from using the photo on a series of bizarre holiday greeting cards they had printed, News Radio 1120 reported last week.

Greenblatt told the news station that the McCloskeys never obtained permission to use the photo, and he sent an invoice to the couple for $1,500. “I am in the business of selling images. I do not give them away for free,” Greenblatt noted in the bill.

Mark McCloskey posted a copy of the invoice on his Facebook page, saying it “made my day” and claiming Greenblatt “stole” the image by taking the photograph.

“The photographer that trespassed into my neighborhood and stole a photo of us has sent us a bill!!!!!” he wrote. “Now be nice and don’t bother him, but what chutzpah.” 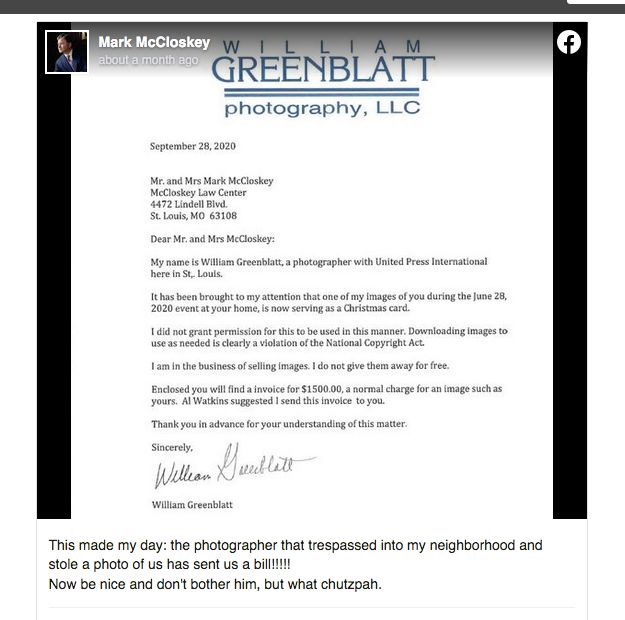 Neither Greenblatt nor the McCloskeys could immediately be reached for comment.

The St. Louis Post-Dispatch reported earlier this year that the McCloskeys have a reputation as obnoxious neighbors who have “nearly constantly sued other people and ordered people off their property.”

They have sued neighbors for altering their gravel road, a former employer for wrongful termination, and others for defamation, and have asserted “squatters’ rights” on common neighborhood property, according to the newspaper. That common property was apparently part of the land they claimed to be guarding from an “angry mob” in June. Mark McCloskey said in an affidavit last year that he had once challenged a neighbor cutting through that property “at gunpoint.”

The chairman of the Texas Republican Party, Allen West, last month pointed to the McCloskeys as victims when pressed to respond to a pickup truck “Trump train” that swarmed Joe Biden’s campaign bus on a highway outside Austin. Instead of commenting on the Trump train, West claimed the media was ignoring the St. Louis attack by a “leftist mob” that attempted to “storm the house” of the McCloskeys, as well as “burn the house down and rape Mrs. McCloskey.”

None of that is true.