The conceptual artist Ron Cobb, who helped shape the look of science-fiction classics Alien, Star Wars and The Abyss, has died in Sydney. He was 83.

The California-born Cobb started his career in film in 1956 as an animator for Walt Disney’s Sleeping Beauty. After being laid off the following year, he odd-jobbed – including as a postal worker – before being drafted into the military in 1960. In 1963, he was sent to Vietnam, as a draughtsman. 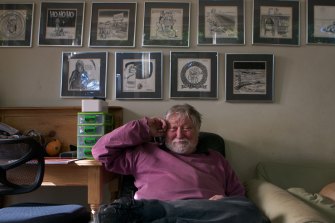 Ron Cobb, at home in Rozelle, Sydney, in 2012. Some of his 1960s cartoons are on the wall behind him.Credit:Sahlan Hayes

Entering what he once termed his “late beatnik, early hippie” phase upon returning to civilian life, Cobb found success as a cartoonist for a range of counter-cultural magazines in the US and abroad – including the Melbourne University student paper Farrago.

His fame as a penner of acerbic anti-war one-shots was such that in 1969 a woman from the Australian Union of Students invited him out for a speaking tour. Her name was Robin Love, and in 1972 they married and set up home together in Sydney, where Cobb died on Monday from Lewy body dementia.

But it is the designs Cobb contributed to a slew of science-fiction films for which he will most be remembered, beginning with John Carpenter’s space tragi-comedy Dark Star (1974). 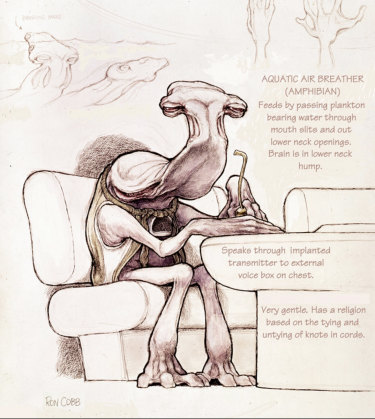 Ron Cobb’s design for an alien from the famous cantina scene in the first Star Wars movie. Credit:Ron Cobb

He was production designer of Conan the Barbarian, helped shape the look of Ridley Scott’s Alien and James Cameron’s sequel, and he designed the DeLorean time travel machine in Back to the Future. He also worked on James Cameron’s The Abyss, and directed the 1992 Australian film Garbo, a much-maligned comedy about a pair of bumbling rubbish collectors in Melbourne.

Steven Spielberg was so impressed by Cobb’s design work on Conan that he tapped him to develop and direct a film about a group of aliens who come to Earth. But Night Skies proved too expensive a proposition, and so Spielberg reworked it – into a more intimate story about a single abandoned alien.

Cobb didn’t think much of E.T., dismissing it as “sentimental and self-indulgent, a pathetic lost-puppy kind of story”, but it set him up for life: his deal with Spielberg gave him 1 per cent of the net on one of the most profitable films of all time.

Steve Kearney, who was pone half of the comedy act Los Trios Ringbarkus who starred in Garbo, described Cobb as “a sweetheart. He had a hearty laugh that was preceded by an exploding, beaming smile, and warm kind eyes. These are thing things I remember.

“He was way above our paygrade but he was so generous, a big teddy bear with the brain of a super computer.”

“He was cynical, brilliant, opinionated, and he loved living in Australia,” Wright said.

Cobb was a “frustrated engineer”, he said, whose design ethos was all about form following function.

“He wanted audiences to behold his work as ‘impressive but believable’,” Wright said. “Alien, Aliens, Back To The Future, Total Recall and many others were all the better for Cobb’s eye for industrial or mechanical authenticity.”

But Cobb was also aware of the limitations of that vision. Speaking in 2012, he observed that science-fiction films were guilty of “recycling what we predictably expect the future to be like”. The true future, he added, “is never what we predict”. 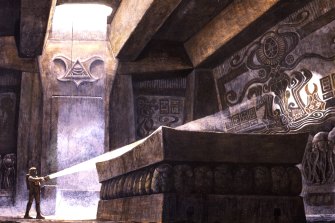 One of Cobb’s conceptual designs for Alien.

He was both pessimistic and optimistic about that future, seeing human progress as responsible for creating enormous challenges to our continued existence but also, in all likelihood, their solutions.

“I do think our progress is problematic, it’s had a very detrimental effect on the environment,” he said. “But at the same time it has created problems that only it can solve. We can’t abandon science.”

Celebrities
Wild ride! Artem Chigvintsev detailed his rocky year and personal struggles ahead of winning Dancing With the Stars with partner...
Lifestyle
We will use your email address only for sending you newsletters. Please see our Privacy Notice for details of your...
TV & Movies
ENDLESS bikini poses - tick, glam nights out in swanky restaurants - tick, desert safaris and an obligatory skyline photo...
World News
Self-proclaimed Tai Chi master claims he was 'tricked' into fighting a kickboxer after being knocked out by his opponent within...
Beauty
Nordstrom's Black Friday deals this year are GREAT. Nay, SPECTACULAR. And one of the best ones so far is the...
Fashion
Us Weekly has affiliate partnerships so we may receive compensation for some links to products and services. Please note, deals...
Recent Posts
We and our partners use cookies on this site to improve our service, perform analytics, personalize advertising, measure advertising performance, and remember website preferences.Ok