Five years since playing their first show, Cable Ties have made a profound impact with their commitment to creativity and their strong sense of community involvement. As well as delivering some of the freshest, most hard-edged and propulsive punk rock songs of the last few years, the Melbourne trio have also been winning fans around the country

This week, ahead of the release of forthcoming album Far Enough on March 27, the band released second single Self-Made Man and the accompanying video directed by Oscar O'Shea. It coincided with a handful of shows Cable Ties plays this month in Melbourne, Sydney and Wollongong ahead of a dozen dates in the US and Europe starting next month. 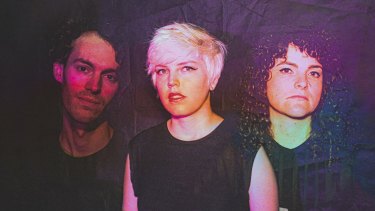 Singer and guitarist Jenny McKechnie was typically unapologetic with the message behind Self-Made Man, saying "it's inconvenient for the Self-Made Man to analyse systems of oppression" that contributed to his own gain. "He doesn't care about the suffering of others because — in his eyes — he got what he deserved through hard work, and they have not," she said.

Along with bass player Nick Brown and drummer Shauna Boyle, McKechine will return from their upcoming overseas tour to play a national tour in April and May, including shows at Waywards in Sydney on April 24 and the Corner Hotel in Melbourne on May 2.

album of the week
Tame Impala
The Slow Rush
(Modular)
★★★
It's safe to say we can dump references to psychedelic rock in relation to Kevin Parker, a genre almost always listed in any observations about the heart, soul and brains behind Tame Impala. A decade since debut album Innerspeaker introduced the producer and multi-instrumentalist to an ever widening audience, the last vestiges of rock in Parker's music have rolled away, leaving the increasingly smooth, hushed moods of his hypnotic RnB, with its endlessly fat grooves and slow drum rolls for fans to gently immerse themselves in. Parker, it seems, relishes these less rocky waters.

selecta
Man Alive! – King Krule
Field Recordings From the Sun – Comets On Fire
The Rise and Fall of Goodtown – Wagons