It seems there was a theme emerging this week at the Sticky desk when it came to our album of the week and now this, from DJ Shadow, who dropped his first album Endtroducing….. in 1996.

Half of his own lifetime later, DJ Shadow releases new album Our Pathetic Age today, through Mass Appeal/Caroline Australia and while the Californian native admits it was some ominous times that have inspired the new work, he also says there's light to be found. 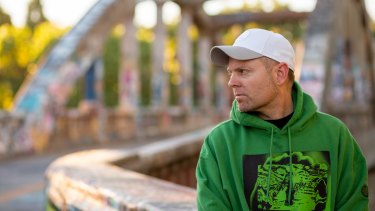 "In my part of the world, people are scared," he says. "There's rampant homelessness and a real fear of falling into generational poverty. People are addicted to, and addled by distraction; they're angry and confused and disaffected by their own governmental institutions. There's songs that are inspired by this energy and seek to harness it, to make sense of it. In some cases, there's attempts to salve the wound; in others, the songs merely observe but don't offer solutions. Despite the title, it's a hopeful, vibrant album … there is always light in darkness."

The opening half of this ambitious double album is for the most part instrumental. The second half of the 26 tracks here feature collaborations with the likes of Ghostface Killah, Run The Jewels, Raekwon, Paul Banks and more.

A pioneering and enormously influential hip-hop and electronic music producer, DJ Shadow (real name Joshua Davis) has been experimenting with musical forms since his early school days. Now, like some others (see below), he's embracing the real power of music to make statements about the world around him. "I want it to reflect the times we live in, a signpost in the ground to mark the era."

album of the week
Neil Young & Crazy Horse
Colorado
(Warner)
★★★★
If something's ailing you, throw on some Neil Young. This new LP ain't a bad place to start, his first with the band since 2012's Psychedelic Pill. Opening with a harmonica intro to Think Of Me and slipping straight into an easy, comforting beat, the prolific Canadian is in full flight from the get go. "When you see those geese in the sky, think of me," he sings in that wonderfully craggy voice. And this, from She Showed Me, which comes with classic Crazy Horse, crunching guitars: "I saw young folks fighting to save Mother Nature." As always, he tells it like it is.

Related posts:
Celebrities
Selena Gomez just released three new songs on the deluxe edition of her album Rare, including a song called “Boyfriend.”...
Lifestyle
Laura Harrier’s plump pout and full eyebrows give the actress an enviable edge in front of the camera. But she...
TV & Movies
DOCTOR Who’s former show runner Steven Moffat has insisted he won’t return to write new episodes. Steven recently returned to...
World News
Boy, six, nicknamed Ozzy Bear who has won the nation's heart as he battled leukaemia for two years gives the...
Beauty
Your Personal PT, Rachel Tavel, is a Doctor of Physical Therapy (DPT) and Certified Strength and Conditioning Specialist (CSCS) at...
Fashion
Madewell's April Drop Is So Cute, You'll Clear Out Your Closet For These 22 Arrivals When I'm ready for a...
Recent Posts
We and our partners use cookies on this site to improve our service, perform analytics, personalize advertising, measure advertising performance, and remember website preferences.Ok