NSW is struggling to keep up with vaccination demand in the hotspot areas of south-west Sydney due to insufficient Pfizer doses and a reluctance of older residents to take AstraZeneca.

The lack of Pfizer vaccine mean tens of thousands of people in high-risk areas could wait months before they can get a jab. The waning uptake of AstraZeneca was highlighted on Tuesday, when the Sydney Olympic Park vaccination hub gave 8295 Pfizer vaccinations and just 50 AstraZeneca. 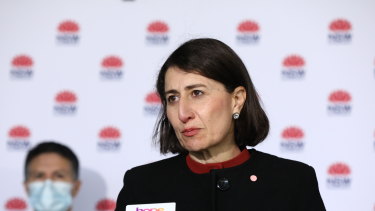 NSW Premier Gladys Berejiklian says NSW will continue to rely on restrictions to fight COVID-19 unless it has more Pfizer vaccine.Credit:Dominic Lorrimer

Doctors say older Australians are slowing down the vaccination rate by refusing to take advantage of AstraZeneca stock, with one GP in western Sydney saying up to one in five eligible patients were holding out for the Pfizer vaccine.

NSW yesterday recorded 110 cases, the third highest number in the current outbreak, with more than one third infectious in the community and the number of mystery cases swelling to more than 300.

Premier Gladys Berejiklian said NSW must continue relying on lockdown conditions to quash the growing outbreak, with Pfizer supplies so low that the state was unable to stock vaccination hubs with enough doses.

“With the vaccination rates the way they are, we won’t be able to live freely and safely unless we are able to quash this current outbreak,” she said.

Prime Minister Scott Morrison on Wednesday said he was making a “constant appeal” to ATAGI to change their medical advice relating to Astra-Zeneca as the preferred vaccine for over-60s, but said he could not control their advice.

“They’re the ones who make medical assessments, scientific assessments about what’s in the health interests of Australians.”

Earlier this month the federal government pledged an extra 300,000 doses – half Pfizer, half AstraZeneca – to boost inoculations for south-west Sydney.

While the Pfizer doses were used almost immediately on teachers and aged care workers, NSW asked the federal government to direct the AstraZeneca doses to community pharmacists instead of state hubs. 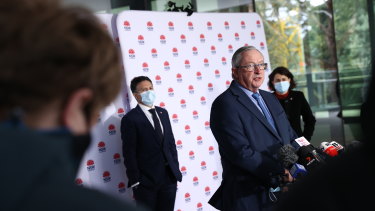 Health Minister Brad Hazzard said thousands of appointments for AstraZeneca were not being taken up due to community reluctance spurred by repeated changes to federal health advice.

He said the need for more Pfizer doses was greater than ever in south-west Sydney because its age demographic was “smack bang” in the Pfizer range.

“The federal government needs to stop rabbiting on about the offers of AstraZeneca and get down to offering and delivering the Pfizer we need to safe guard our south-west and the whole of NSW,” Mr Hazzard said.

Supplies of Pfizer doses are expected to ramp up with deliveries from mid-September to the end of October.

GPs have warned that many people aged over 60 who were eligible to be vaccinated were not taking advantage of the AstraZeneca vaccine because they were concerned about the rare side effect of blood clots. Around 75 per cent of people over 70 have received both vaccination shots.

Mt Druitt GP Kean-Seng Lim said he was only receiving 60 Pfizer shots each week, despite more than 3500 patients on his books.

“We are seeing a lot of people aged over 60 who are deeply suspicious of AstraZeneca and want Pfizer. This is despite the fact they could reduce their risk and get AstraZeneca right now,” said Dr Lim.

The National COVID Vaccine Taskforce has fast-tracked another 260 general practices in Greater Sydney to administer the Pfizer vaccine, bringing the total number of GPs administering Pfizer to more than 650.

A new state-run vaccination centre in Macquarie Fields is set to open on Monday, with a promised capacity to administer up to 20,000 vaccines a week.

However the new facility will open with a backlog, with the first 11,000 double-dose bookings already allocated to a wait list of people from a Liverpool clinic where Pfizer demand had exceeded supply.

Macquarie Fields MP Anoulack Chanthivong said the community had been left frustrated and anxious by an “information vacuum” less than a week before the centre opens.

“The vaccination roll-out is of course a federal government responsibility, which we all know has failed quite badly, but state government messaging needs to be a lot clearer.”

Labor health spokesman Ryan Park said the only way out of lockdowns was increasing the rate of vaccination. Online bookings for vaccinations at the new centre will open on Friday.

There are currently 106 COVID-19 cases in hospital, with 23 in intensive care, 11 of whom require ventilation. Health experts say it is too early to lift restrictions until the vaccination rate is higher, with an increasing number of healthy, young adults becoming severely ill.