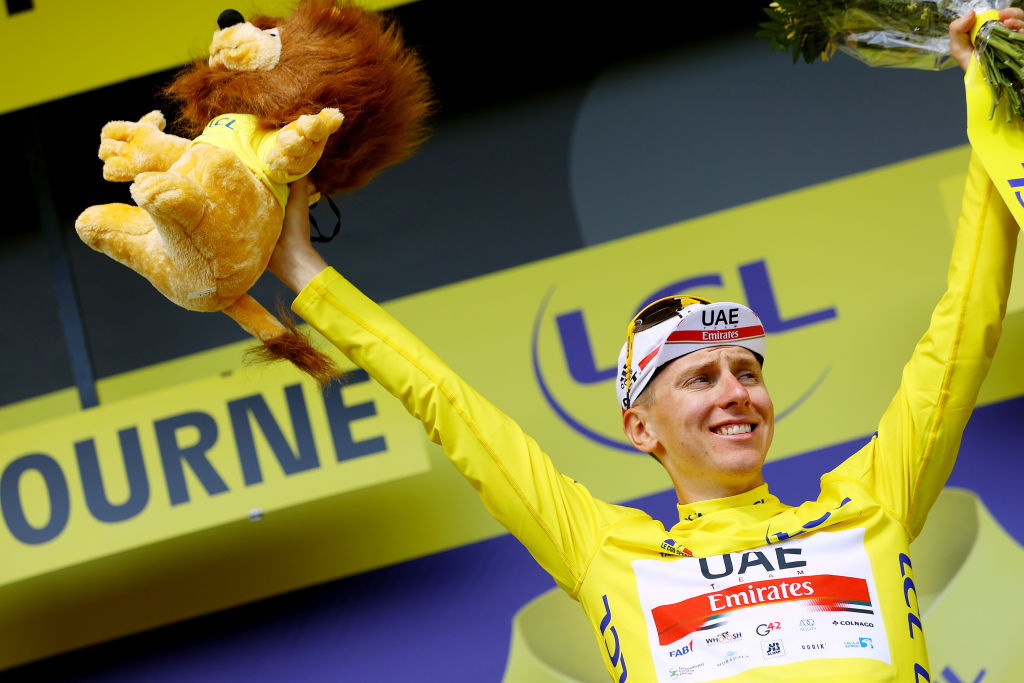 The UAE-Team Emirates rider went into the penultimate race of the Tour with a five minute and 45 second advantage and there was no repeat of last year’s drama, when the 22-year-old overhauled Primoz Roglic to claim his first yellow jersey.

Pogacar – the last man to ride – only laid down the eighth fastest time of the day, treating the 30.8km time trial around the vineyards outside Saint Emillion with a degree of caution.

But that was enough to wrap up the overall race victory, maintaining a five minute and 20 second lead, and Pogacar has sealed the yellow jersey barring a massive disaster tomorrow.

While there is still one more stage to go, Sunday’s famous finish on the Champs-Elysees is effectively a procession – with the yellow jersey winner even drinking champagne at the start of the race – before ending in a sprint along the cobbles.

Pogacar – who has won three stages at this year’s Tour – had won every individual time trial since making his debut but was beaten by Belgium’s Wout van Aert on Saturday, who completed the course in a blistering 35 minutes and 53 seconds.

Denmark’s Jonas Vingegaard held on to second place in the overall standings in his debut Tour, while Ecuadorian Richard Carapaz – who was just six seconds behind at the start of the day – lost some time in the TT but still secured a place on the podium for Ineos Grenadiers.

Speaking to Eurosport after securing the yellow jersey for a second time, Pogacar said: ‘I was just super happy it was finished. Actually the time trial went fast, there was so much support on the course and obviously I just wanted to enjoy every kilometre even though I was suffering. It was super hot but I was so happy when I crossed the finish, I cannot describe it.

‘I was going flat out, but totally different from stage five. There was much more adrenaline, but today I did my best. I was prepared good but it was just not in my legs. But it’s still a super performance for me, I’m super happy with the result.’

There have been some rumblings of controversy over Pogacar’s dominance, with a report in Swiss daily Le Temps claiming several riders have heard ‘strange noises’ coming from the bikes of four teams: UAE-Emirates, Deceuninck-QuickStep, Jumbo-Visma and Bahrain Victorious.

But Pogacar was in disbelief when asked about the claims yesterday, responding: ‘I don’t know. We don’t hear any noise. We don’t use anything illegal. It’s all Campagnolo materials, Bora. I don’t know what to say.’

From a British perspective, Geraint Thomas had a disappointing Tour due to injury and crashes and finished in 47th position in the time trial, over three minutes off Van Aert’s pace, and will need to improve markedly if he is to land a medal at the Olympics next Saturday in the men’s road race.

There is still some drama left for Sunday’s final day, with Mark Cavendish bidding to overhaul Eddie Merckx’s long-standing record of 34 stage wins in what would be a fairytale finish on the Champs-Elysees – while he only needs to stay upright to secure the green jersey.

For more stories like this, check our sport page