The “Orange Is the New Black” star says she’s a “good dancer” and has been invited to compete on the show several times.

Don’t tell the stars that are competing on “Dancing with the Stars,” but Taryn Manning might just think they’re all has-beens.

At least that’s the reason the “Orange Is the New Black” alum gave for rejecting invites to appear on the popular ABC celebrity dancing competition. Presumably, that would go for past stars who’ve appeared on the show as well across its 29 seasons. 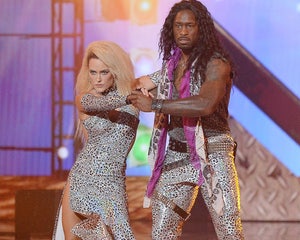 For Manning, though, saying yes would apparently make a clear statement about the current status of her career.

“I’ve been asked to be on [the show] many times,” she told Page Six. “I have this weird phobia that [appearing on it] means you’re a has-been, and I never want to believe that’s the case.”

And yet, if Manning is to be believed, she might well be a force to be reckoned with should she ever take the opportunity.

“Maybe it’s my own stuff, but, yeah, I’m definitely a good dancer,” she told the outlet.

Current “has-beens” include Backstreet Boy AJ McLean, “Catfish” creator Nev Schulman and “One Day at a Time” star Justina Machado. And the list of legacy “has-beens” is just astronomical.

Sure, it could be argued that the show often features celebrities who aren’t at the prime of their popularity, but it also features world-class athletes, reality stars and up-and-comers. And recent seasons have definitely seen a boost in star power.

The bottom line is that just like “The Masked Singer,” ABC’s reality juggernaut is a fun diversion that’s open to any star willing to not take themselves seriously for a few months and try something new and fun.

Plus, it can open up a whole new range of fans, show a different side to the celebs participating and even create new career opportunities. It’s only beneath you if you decide it’s beneath you.

Got a story or tip for us? Email TooFab editors at [email protected].

Celebrities
Eva Mendes has never been one to talk much about her personal life. She’s been in a relationship with Ryan...
Lifestyle
Those sugary junk foods kids beg for in the supermarket? They were likely recommended by a child YouTube influencer.A new...
TV & Movies
Movie star Jonah Hill and actress Beanie Feldstein are both super talented and funny — and as it turns out,...
World News
The Daily Star's FREE newsletter is spectacular! Sign up today for the best stories straight to your inboxA university student...
Beauty
Facials are magic when it comes to transforming meh-feeling skin into glowing, blissful radiance in less than an hour. Even...
Fashion
We don’t know about you, but our sweater drawers are almost entirely full of black and gray options. While we’re...
Recent Posts
We and our partners use cookies on this site to improve our service, perform analytics, personalize advertising, measure advertising performance, and remember website preferences.Ok