The family of Sigley, who had been living with Alzheimer’s disease and had been in residential care in his final years, announced he passed away peacefully on Sunday. 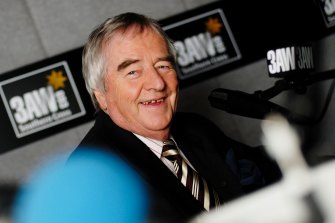 The son of a boilermaker, Sigley was born in Footscray and was one of seven sons.

His entertainment career was built from humble beginnings, with Sigley first working as a turntable operator at radio station 3DB Melbourne in 1952.

After making his television debut on Teenage Mailbag at the age of 19, Sigley spent two years in Europe during the early 1950s, working at the BBC and Radio Luxembourg as a disc jockey.

Returning to Australia and having to essentially ‘start from scratch’, Sigley interviewed The Beatles during the Adelaide leg of their 1964 Australian tour before hosting prime-time variety show Adelaide Tonight in the early 1970s.

Poached back to Melbourne by GTV9, his popularity soared in his role hosting The Ernie Sigley Show, where he was teamed with Denise Drysdale. 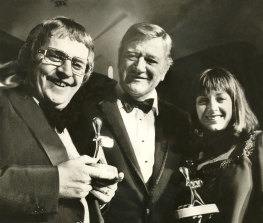 Ernie Sigley and Denise Drysdale with John Wayne at the Logies.Credit:The Age Archives

Also known as the ‘little Aussie battler’, Sigley received 21 Logie Awards, scooping the Gold Logie in 1975 for most popular personality on Australian television.

His on-camera chemistry with Drysdale translated into their recording of Hey Paula hitting No.1 on the charts.

Sigley hosted a diverse range of television shows after The Ernie Sigley Show finished in 1976, including Saturday Night Live, Wheel of Fortune and morning program In Melbourne Today.

Later in his career, he hosted 3AW’s afternoon radio program from 1996 until his retirement in 2008. 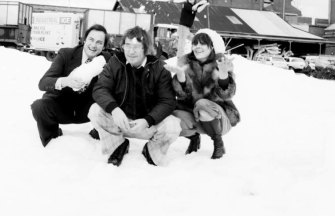 Pete Smith with Ernie Sigley and Denise Drysdale in the ’70s.

The Age’s veteran film and television critic Jim Murphy touted “the raspy voice, the gap-toothed grin, the lascivious laugh, the fondness for grubby innuendo” of Sigley after he finished his stint at 3AW.

“Ask industry insiders about Ernie Sigley and the word that crops up most often is “survivor”. Few laud his work ethic or the depth of his general knowledge or the cordiality of his working relationships,” Murphy said in 2008.

“But all acknowledge – some with admiration, others with incredulity – the number of times he has bounced back in a turbulent 56 years in show business.”

Sigley is survived by his wife of 47 years, Glenys, and four children Matthew, Guy, David, and Emma.