The most viewed homes for sale of 2019 revealed: From a penthouse to a castle – and the £5m Essex pad with a velvet bedroom and strategically placed mirror that topped the list

The most popular homes for sale this year have been revealed – and taking top spot is one with a cheeky secret in the bedroom, ahead of a spectacular Scottish castle and a swanky Manchester penthouse.

The nine-bedroom house in Chigwell, Essex – which belonged to Newcastle United striker Andy Carroll – seized the crown of the most viewed home on the property website Rightmove this year.

However, it is not the high number of bedrooms or even the £4,999,995 price tag that is the most attention-grabbing aspect of this particular property.

Instead, it is more likely to be the interior design of one of the bedrooms. It includes an extra large mirror placed on the ceiling directly above the double bed. 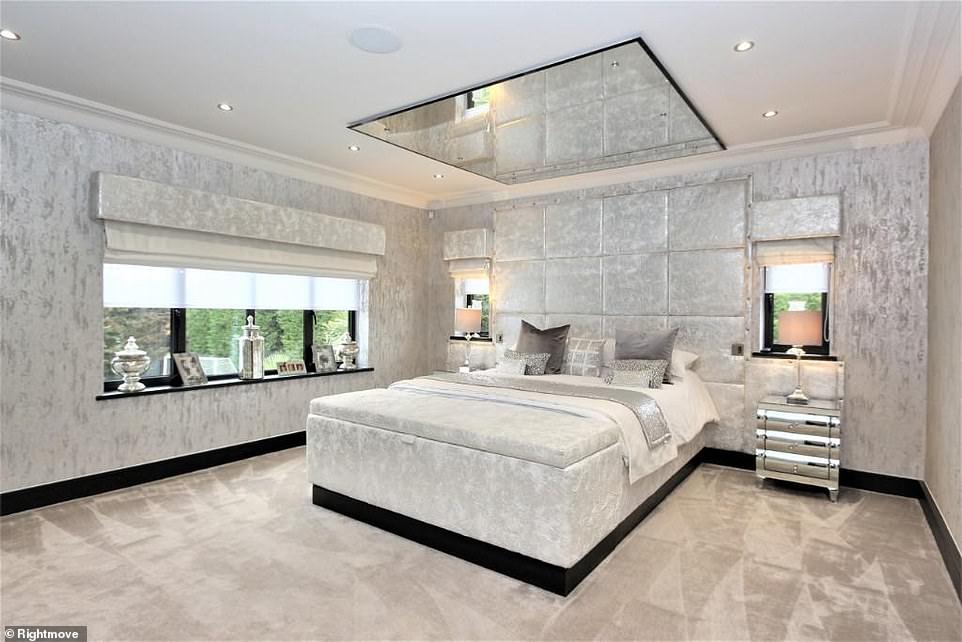 Where the magic happens: One of the most popular properties for sale on Rightmove has a cheeky secret in the bedroom

The room also has large padded headboard and there is silver wallpaper and curtain pelmets, with plenty of crushed velvet, including on the storage box at the end of the double bed.

The Essex house is top of the pile of the five most viewed homes on property website Rightmove, which we detail below.

It is the former family home of Andy and former TOWIE star Billi Mucklow during his spell at West Ham. However, he has since moved out following his return to boyhood club Newcastle United this season.

Rightmove’s Miles Shipside said: ‘It’s great to see such a brilliantly diverse variety of homes available on Rightmove and it’s no surprise to see these five properties at the top of our list.

‘Each Christmas I’m always curious to see which homes have sparked the most interest across Britain throughout the year and suffice to say the properties with the biggest personalities or quirkiest features are usually the most popular.’

The Essex house with the bedroom ceiling mirror tops the list of the five most viewed homes.

Its sale is being handled by estate agent John Thoma, who described it in the property advert as ‘spectacular’.

‘The property has been designed and finished to a very high standard, with modern clean lines, fine wall coverings, high quality furnishings and appliances,’ it claimed.

The house extends across more than 8,000 square feet and has three floors, along with an annexe that includes a games room. 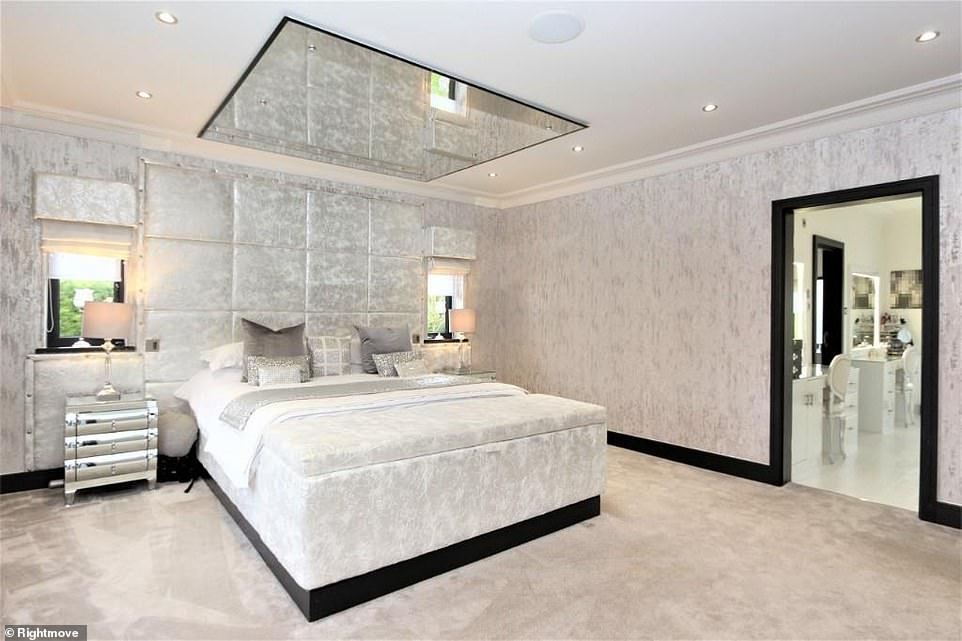 The nine-bedroom house for sale is in Chigwell, Essex, and is on the market with an asking price of £4,999.995 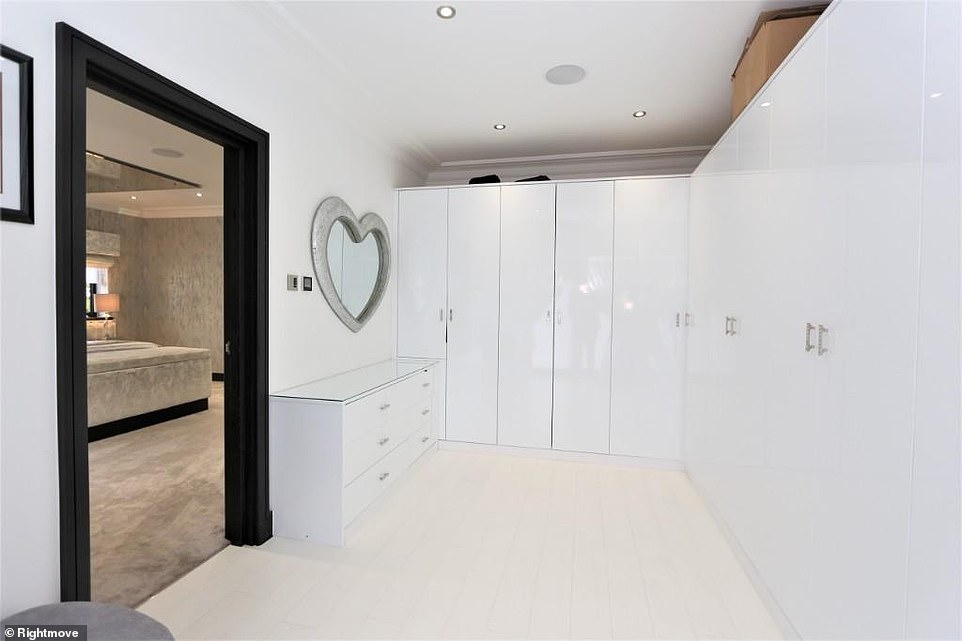 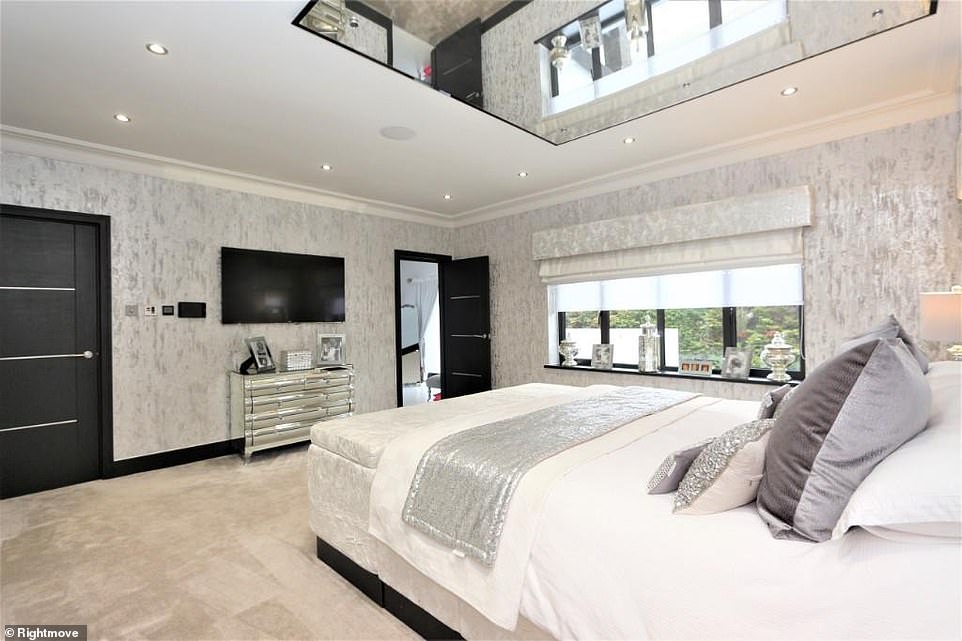 The cheeky bedroom has plenty of silver crushed velvet, including on the curtain pelmets, and wallpaper matching the look 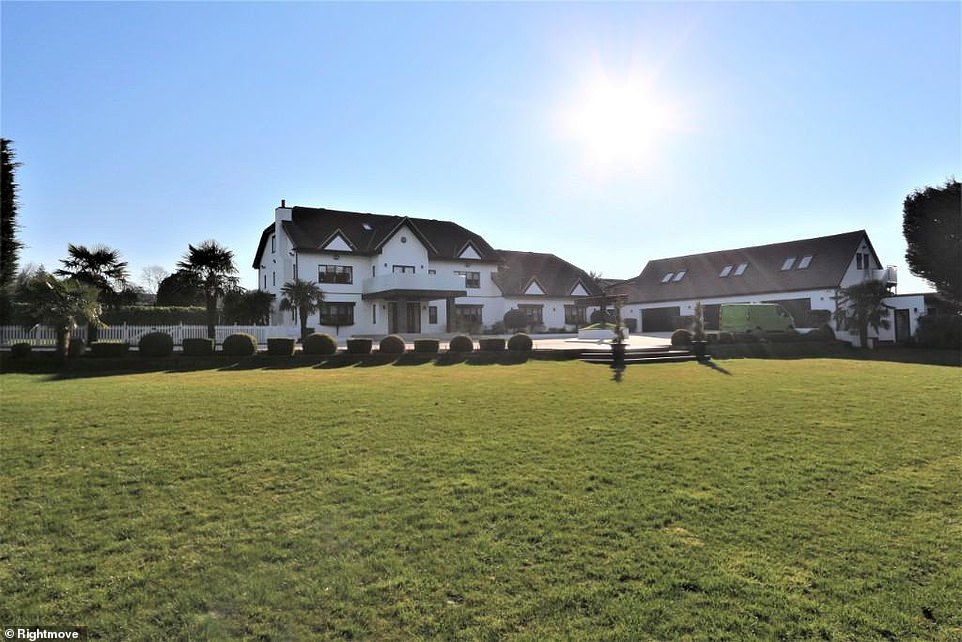 The property is set in more than an acre of land and is entered via an electronic gate, with outbuildings at its side 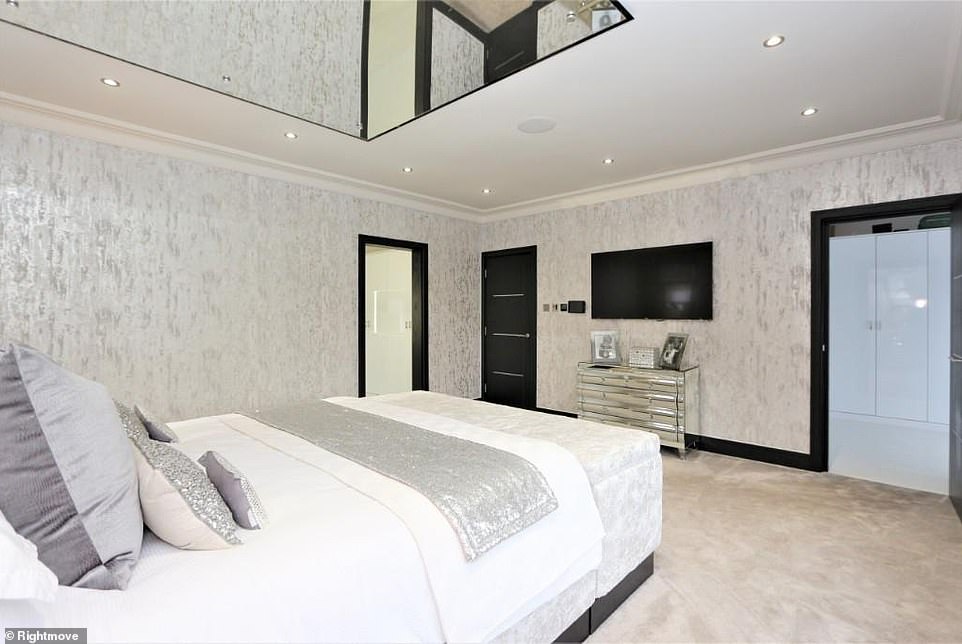 Hot and sweaty: Leading off the master bedroom, there is also a steam room with seating

The second most popular property for sale this year on Rightmove is a castle that wouldn’t look out of place on the set of Game of Thrones.

Glenborrodale Castle is a turreted building dating from 1902, built of red Dumfriesshire sandstone, which sits in 132 acres.

Inside of the property, there are wood panelled walls, stone fireplace surrounds and arched hallways with pillars. The castle has a total of 16 bedrooms and its sale is being handled by Bell Ingram estate agents.

Additional buildings in the grounds include a gate lodge, a detached coach house, gym, boathouse and jetty. 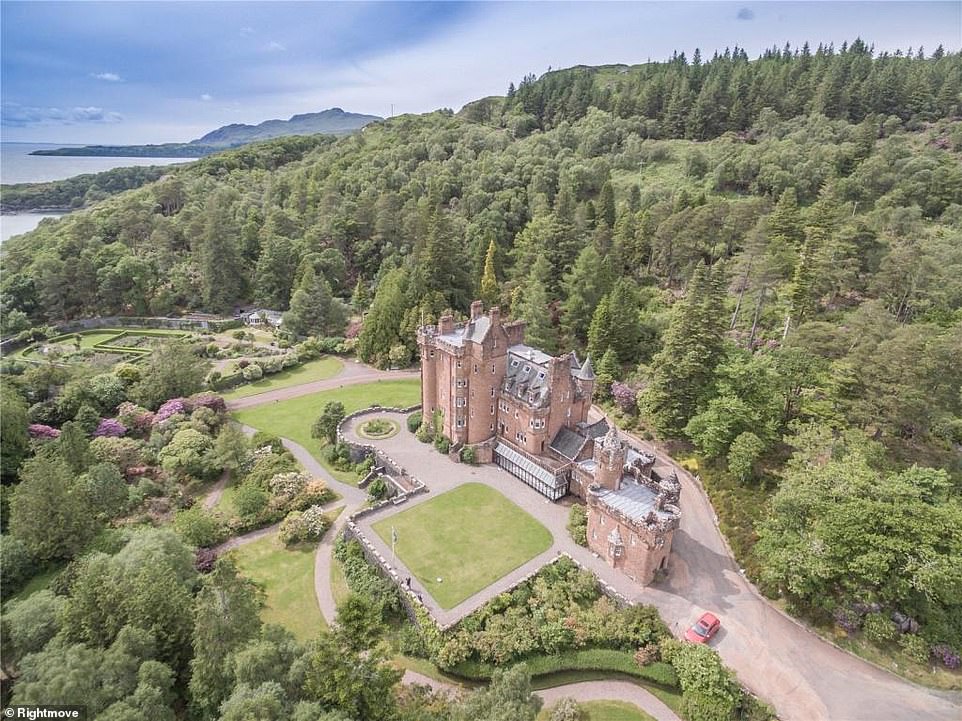 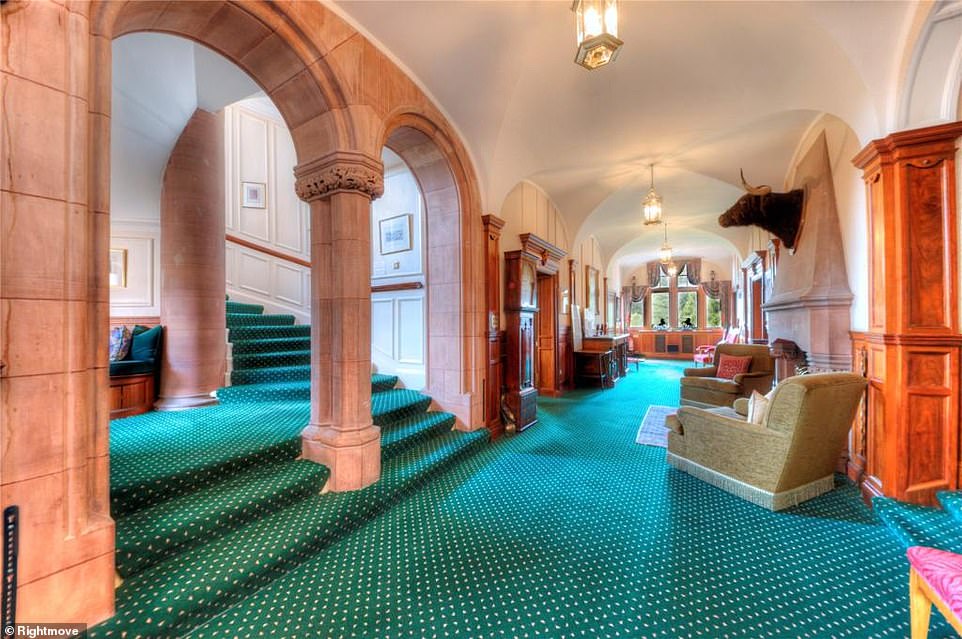 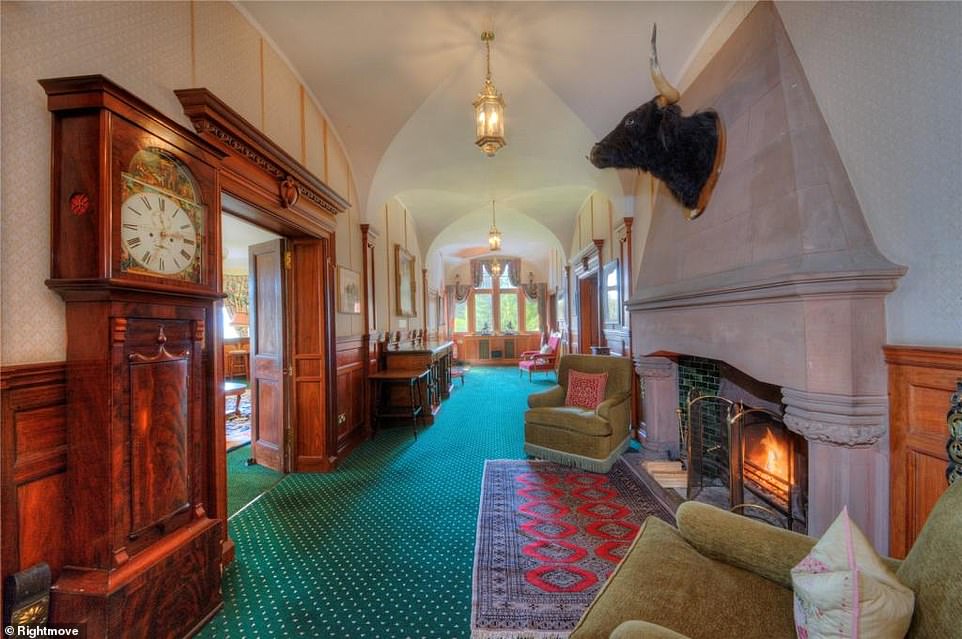 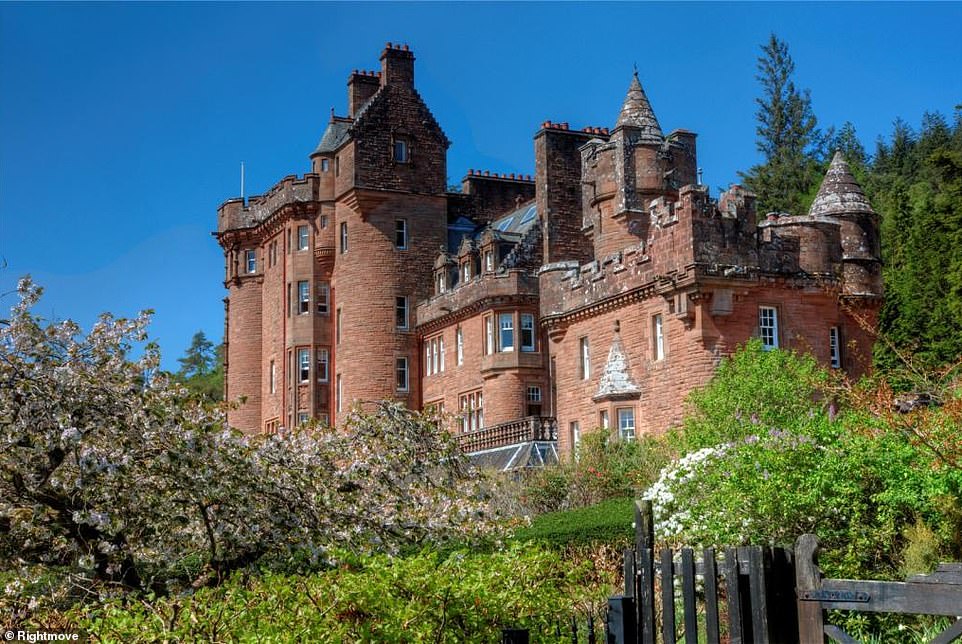 The majestic property has an impressive 16 bedrooms and an asking price of £3.75million 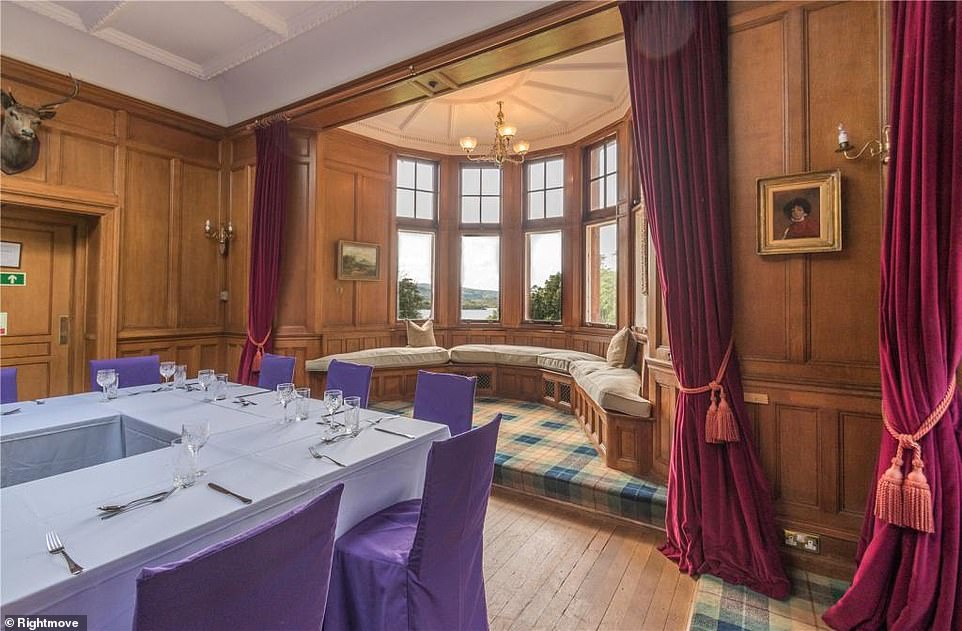 3. Four-bed penthouse in Manchester for £3.5m

While all of the top five most viewed homes on Rightmove this year have multi-million price tags, they are not all detached properties.

In third place is this luxury penthouse with extensive views across Manchester, including Old Trafford stadium.

The entrance to the penthouse is on the 45th level of Beetham Tower – in Deansgate, the city’s main thoroughfare – and it goes on to spread across three levels. The sale of the penthouse is via estate agents Rendall & Rittner. 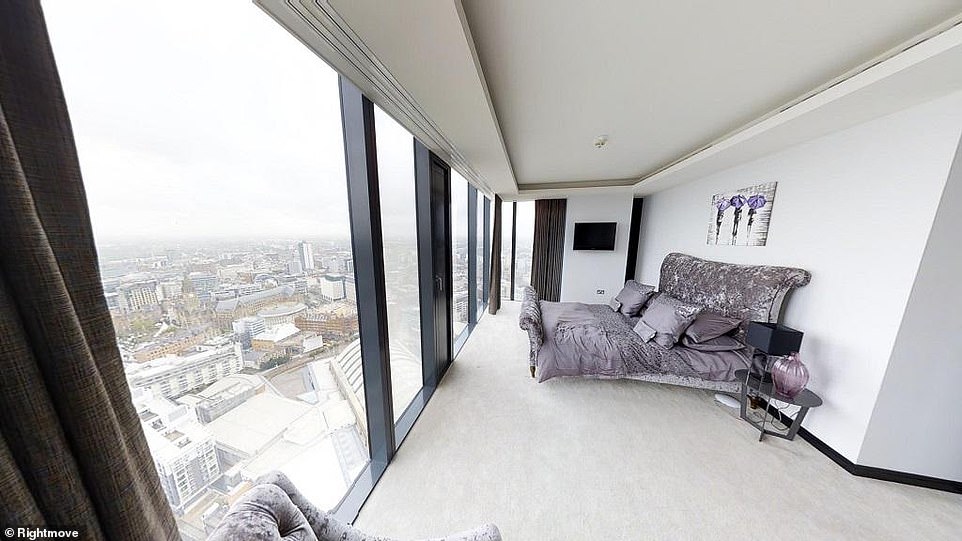 Floor to ceiling windows: The four-bedroom penthouse has magnificent views of central Manchester 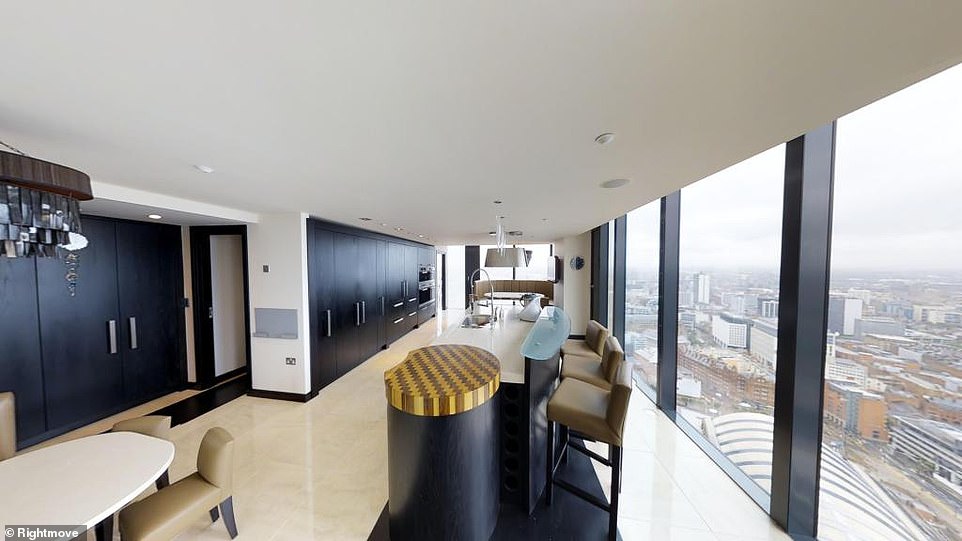 City views: The property has a black kitchen with a breakfast bar and a separate dining table 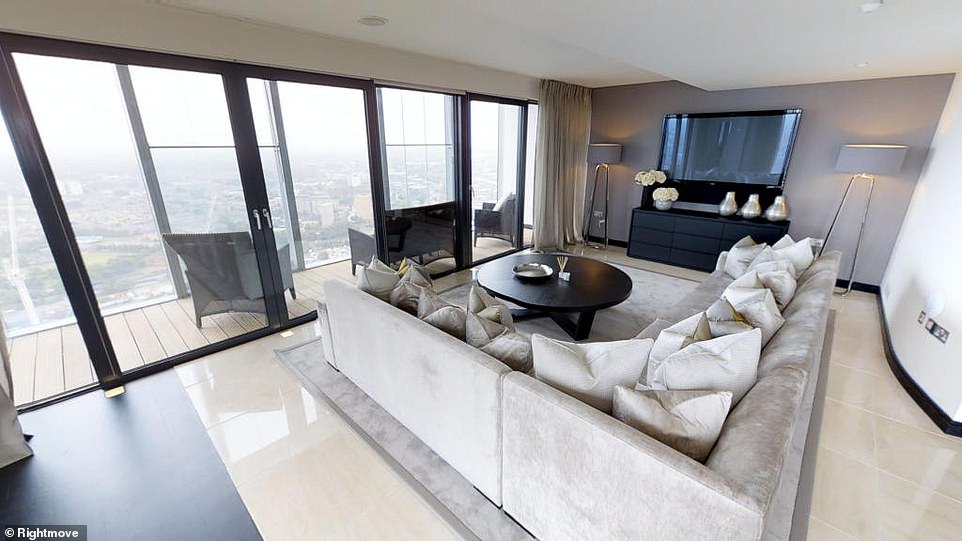 The fourth most viewed property on Rightmove this year is a luxury home that looks perfect for an episode of The Real Housewives of Cheshire.

Located in the Cheshire village of Prestbury, the property is called Overdale and it is set in an acre of land.

Inside the property, there is a wing dedicated to a large leisure suite with a swimming pool, steam room and gym. There is also a dedicated games room and a separate cinema room. It is being sold via estate agents Gascoigne Halman.

Perfect for a Real Housewife of Cheshire? The property has a contemporary kitchen and dining area 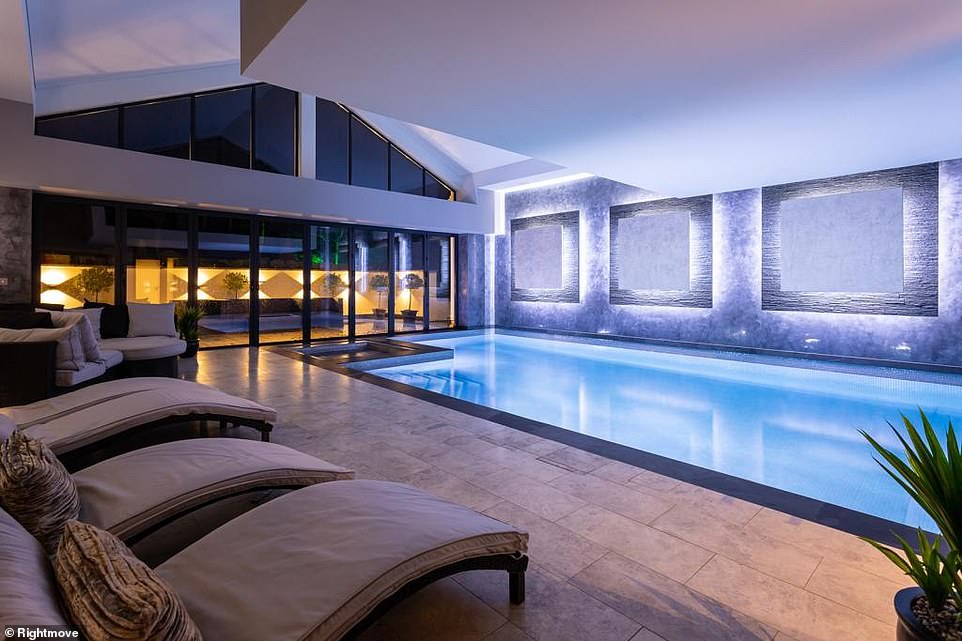 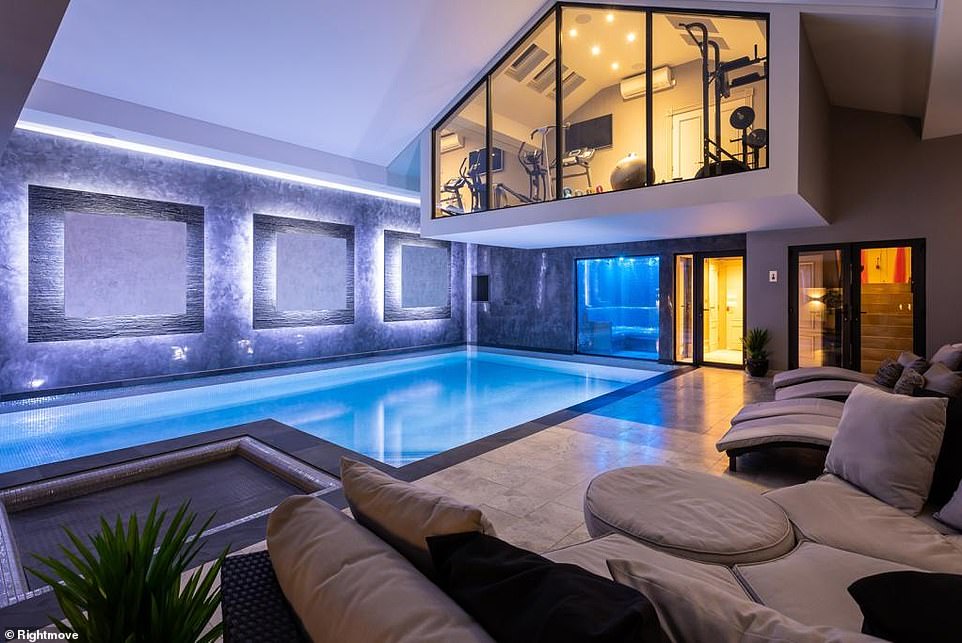 A workout with a view: The leisure suite also includes a gym area that overlooks the swimming pool 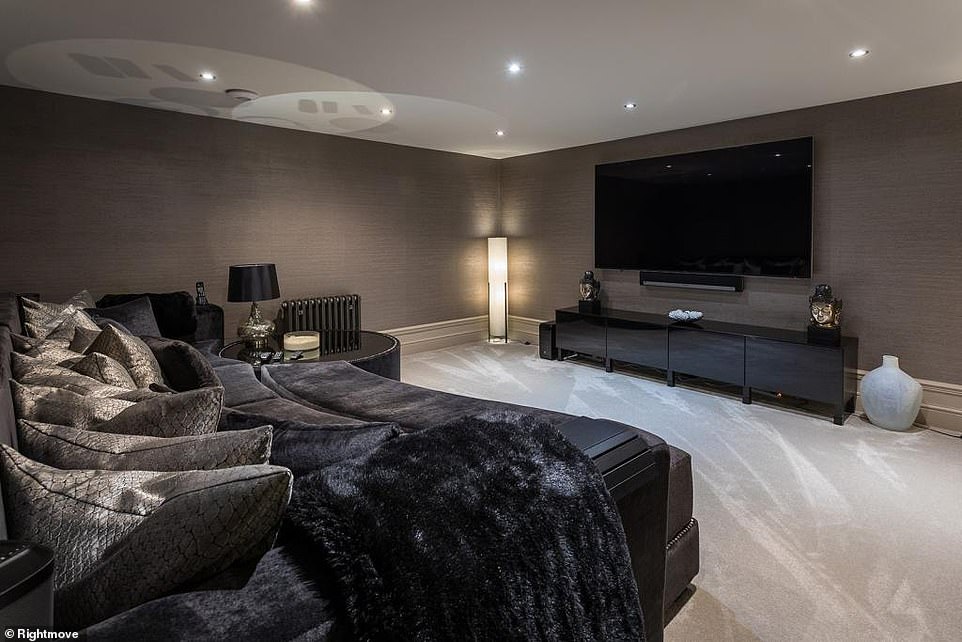 The Cheshire house also includes a cinema room, a must-have for any luxury multi-million pound home 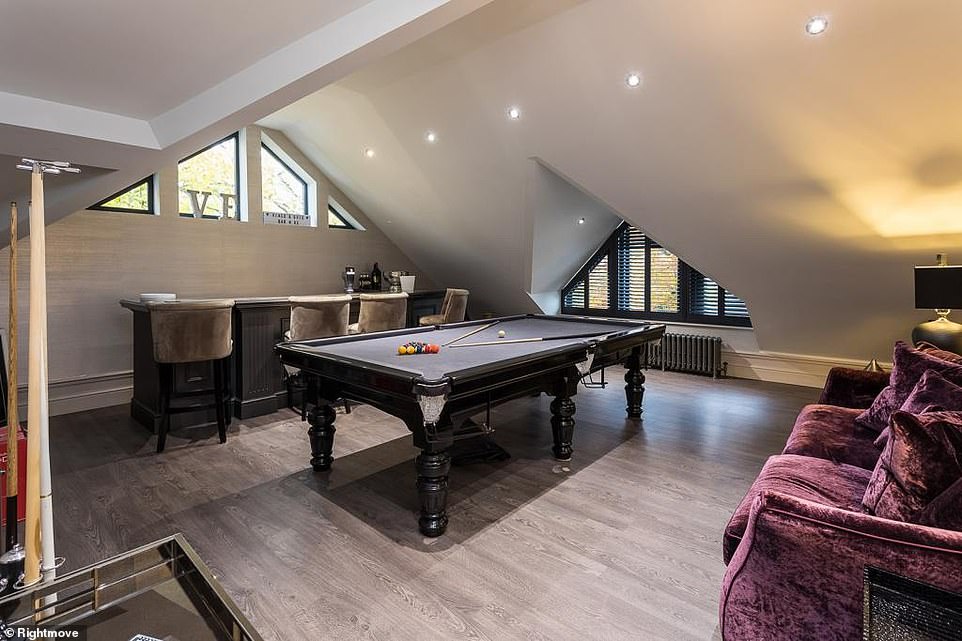 Shall we play? There is also a games room at the Cheshire house, with enough space for a bar and a pool table

Canonteign Manor is the final property to appear in the top five most viewed properties for sale on Rightmove this year.

Records report that the property in Christow, Exeter, was given to the canons of St Mary du Val in Normandy around 1125, and later transferred to the Prior and convent of Merton in Surrey.

It was then granted to Lord John Russell before being passed through a series of owners. It was even garrisoned for the Kind during the Civil War.

Today, it is a comfortable family home that combines the best of its 400 year old origins with the conveniences of modern technology. It is being sold via estate agents Fine & Country. 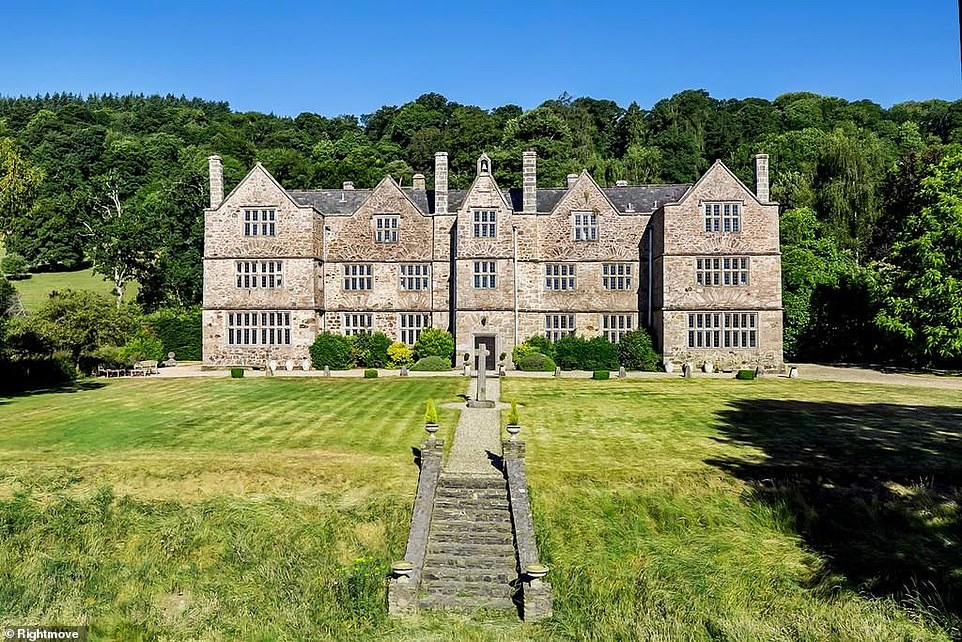 Exeter’s Canonteign Manor is a historic home, which is today on the market for £3.95million 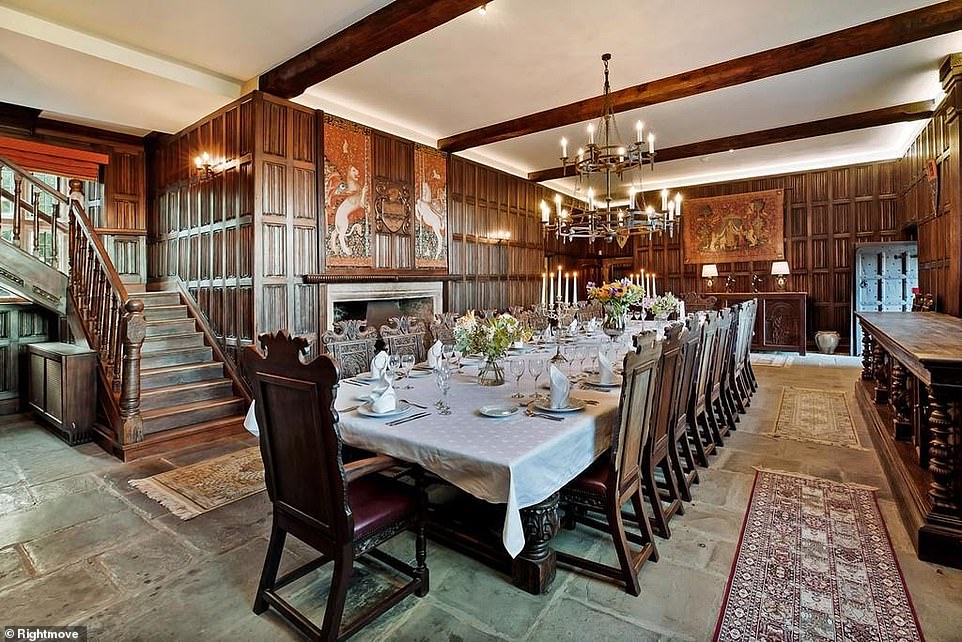 The interiors feel steeped in history, with stone floors and wood panelling on the walls and staircase 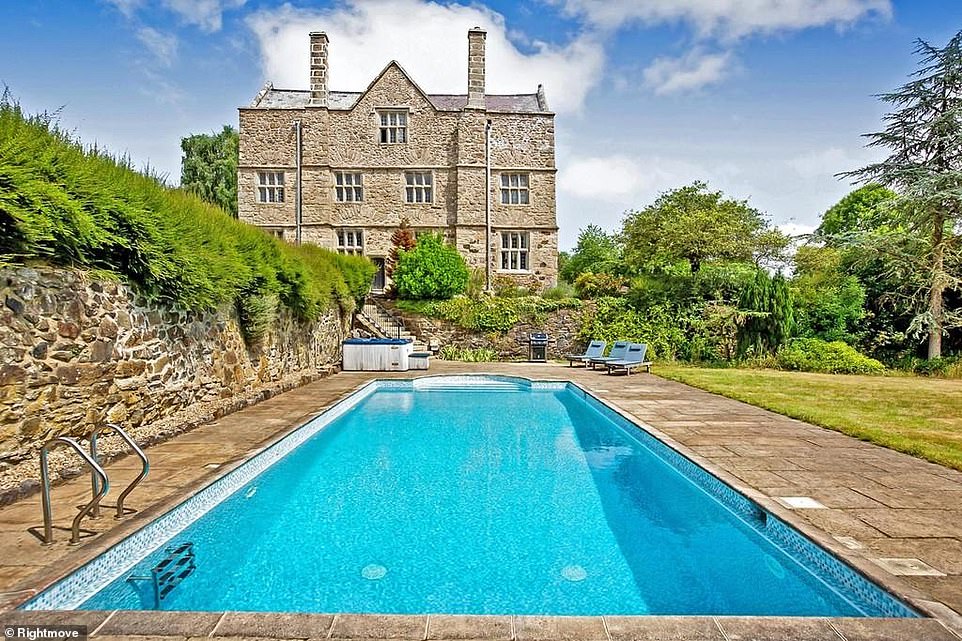 Outside, there is a swimming pool and a hot tub in the gardens, with the grounds stretching to 10 acres 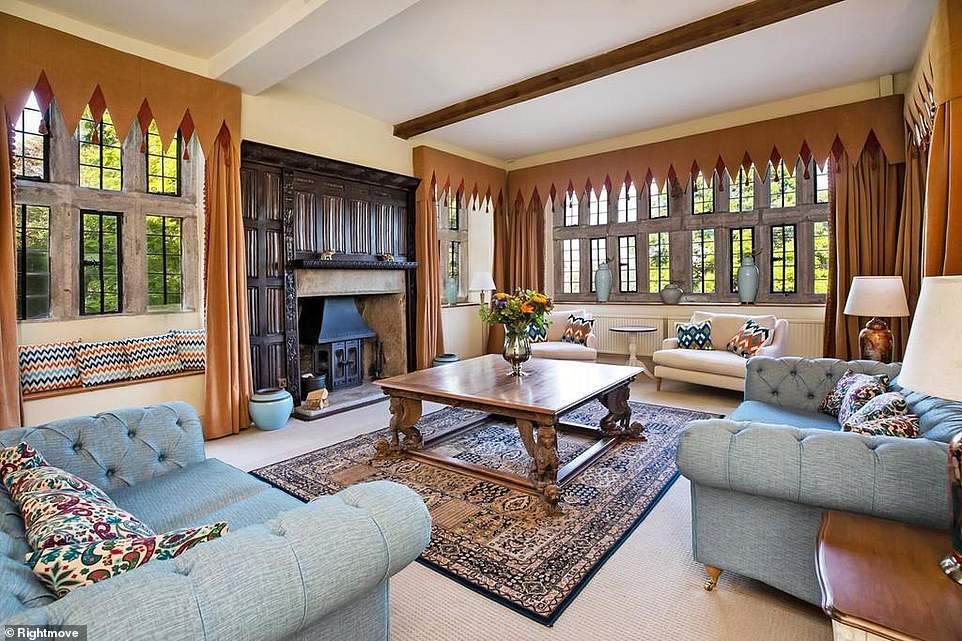 Today, the 400-year home is now a comfortable family home with elegant and comfortable rooms