The This Is Us season 5 finale is slated for Tuesday, May 25 with Kevin (Justin Hartley) and Madison’s (Caitlin Thompson) wedding. As Kevin deems in the episode 16 promo trailer, “this will be one for the ages.” However, eagle-eyed fans spotted one reason why the relationship might not continue. Hint: it’s all because of creator, Dan Fogelman.

Some ‘This Is Us’ fans think Madison deserves better than Kevin 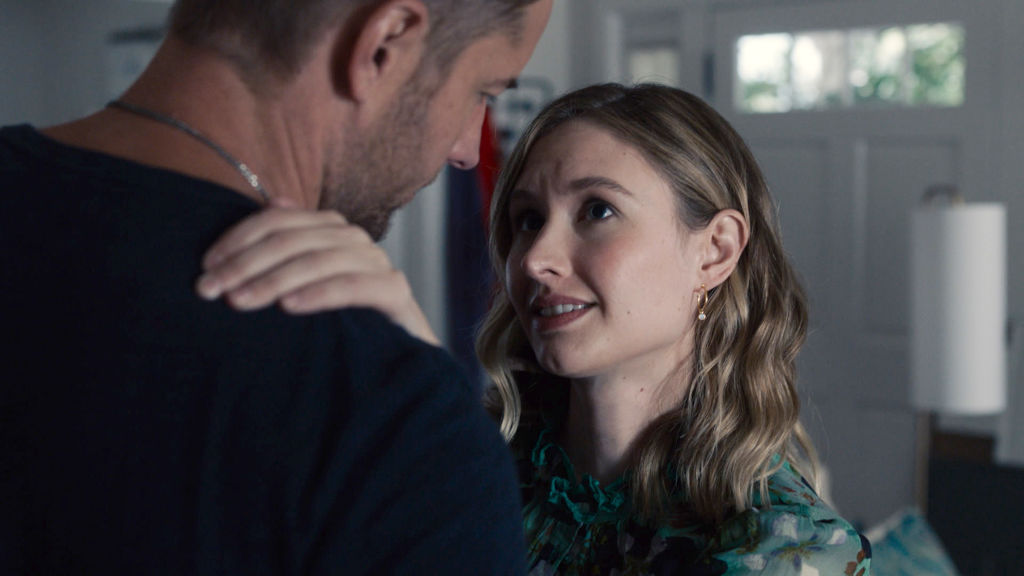 The May 18 episode of This Is Us tinkered with the idea of “cold feet.” The episode, titled “Jerry 2.0” referenced the 1996 film, Jerry McGuire as Kevin and Madison went their separate ways to celebrate their bachelor and bachelorette parties. As Kevin and the fellas watched the Tom-Cruise blockbuster, Madison and her ladies painted Madison’s nude ex-boyfriend. And yes, it was awkward.

All in all, the closer Madison and Kevin get to the wedding itself, the more fans divide. One Redditor stated that Madison is “settling,” and “deserves to be loved.”

Others chimed in, adding that Kevin and Madison don’t even “have chemistry,” when compared to that of his previous romance with Sophie (Alexandra Breckenridge).

“I think Madison will get cold feet and not show up to the wedding. They are focusing so much on Kevin that I’m certain the twist will be Madison related,” another commented. “Nobody is expecting her to walk away, but we really haven’t gotten much of her POV. She’s probably having the same doubts, but she thinks this is the right thing to do. If they stay together, it makes things less complicated for everyone especially their kids.”

Others have a theory that the wedding is too predictable.

Whether you’re team Madison or not, we can’t put it past writers to deviate from the expected path for the season 5 finale. This is exactly why some fans are questioning a previous statement about the couple from the creator himself.

Kevin and Madison weren’t supposed to get together

We hate to bring receipts, but Fogelman’s 2018 tweet recently resurfaced and it promises fans there’d be no Kevin and Madison.

“Just FYI: Madison is my wife in real life @CaitwithaC And if you thought I was letting her sleep with @justinhartley on national television you’re nuts. #ThisIsUs,” Fogleman wrote.

At the time, viewers were desperate for answers about Kevin’s flash-forward where he’s older, married, and with children. Many pegged Sophie as the future Mrs. Pearson, but a few guessed at Madison’s position — including us, who theorized it to be Madison all along. We even suggested that Fogleman’s tweet could be just another red herring as it turned out to be.

Some are relying on the technicality that their “intimate time” was never shown on-screen. A few fans joked that because we never saw it, maybe it didn’t happen and Fogleman didn’t actually lie.

Regardless of how the events played out, it’s just another day in the land of This Is Us where they’ve succeeded in throwing us off wherever they can.

Stock up on tissues because it doesn’t look like the twists or tears will let up any time soon. Hartley’s on-screen dad, Milo Ventimiglia (who plays Jack Pearson), told the ladies of The Talk that people might be “upset” with the season 5 finale.

While that doesn’t leave much reassurance about Kevin and Madison’s wedding, there’s bigger fish to fry when it comes to the series finale at the conclusion of season 6.

“I think it’s very unpredictable,” Hartley previously told Entertainment Weekly. “The way that the story has been told to me and the way that it ends seems like the right way to ‘end’ it. Just like life, everything does end, doesn’t it?”

He continued: “I think it’s full. You’re going to have a full heart, just because by that time you will have watched these people and all of their journeys for such a long time. When you invest that much as an audience member, you’ll fill up completely, but in a satisfying way… It’s definitely an emotional journey, and we have a lot of laughs to be told in it. I mean, there’s funny stuff coming up as well.”

Like we said — stock up on the tissues for whatever happens with the wedding (and everything else that follows).