Leaves are falling fast, reducing tree canopies to skeletons before our very eyes. But one of the upsides of a bare tree is a bold trunk. A trunk’s shape, texture and colour can really change the tone of a garden.

The South Koreans know this, which is why the leafless crepe myrtles I saw dotted around the 1500-year-old burial mounds in the heritage site of Gyeongju a few months ago had been pruned hard and then scrubbed until their dappled bark was as smooth as polished stone. Real, live Lagerstroemia indica ­these might have been but they came over as inert as marble.

The plane trees lining some of the streets of Tokyo lent the same effect. Come winter the trees’ camouflage-pattern trunks and tight-knuckle branch tips – a telltale sign of the Japanese predilection for rigorous pruning – combine to evoke not trees but monumental carvings. Any more tightly managed and these Platanus x acerifolia would be bonsai. 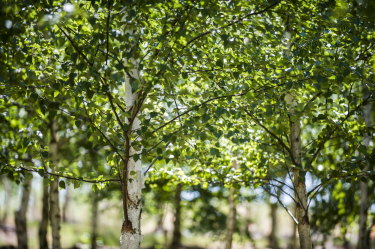 The UK designer Rosemary Alexander once spoke in Melbourne about how the Japanese had inspired her to annually scrub her twin silver birches (the particularly white-trunked Betula utilis ‘Jacquemontii’) with a scourer that had been dipped into a bucket of water mixed with a drop of washing-up liquid. She described standing on a ladder and rubbing the trunks until the pale, peeling bark was a glistening creamy-white.

The audience gave a friendly laugh ­but the concept is not so outlandish. Gardening is all about finessing ‘natural’ growth and, even if few of us go to such bark-scrubbing or hard-pruning lengths, we commonly adopt other methods to heighten the impact of a trunk.

Planting trees in multiple is especially common. Nothing draws the eye to the shape of a trunk, or to the colour and texture of its bark, than being confronted by the one tree planted en masse.

Planting copses is an age-old way of highlighting the appeal of a particular type of tree, trunk included. It works for all sorts of deciduous or evergreen species – pale-trunked eucalypts, black sheoaks, gnarly olives, birches. Other arrangements of closely planted trees can have the same effect. Rick Eckersley planted a tight spiralling curve of spotted gums at his own (since sold) Flinders garden, a display that directed all attention to the smooth, spotty totem-pole trunks. 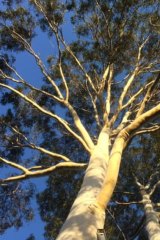 The more than 100 lemon-scented gums planted – by the late Dame Elisabeth Murdoch from a plan prepared by Edna Walling – alongside the driveway of Cruden Farm in Langwarrin, are more sinuous but again they make a show of their chalky, pastel-coloured trunks. Alternatively you can choose a tree that is naturally multi-stemmed (think Eucalyptus pulverulenta, E. pauciflora or other mallees) and thereby get an exaggerated trunk display from the one specimen. You can even encourage this tendency through coppicing, which is a process of periodically cutting the tree to near ground level to stimulate growth.

Or you can go the other extreme and plant one tree with particularly dramatic bark – a red-trunked coral bark maple, for example, or on the evergreen front an Arbutus x andrachnoides or Eucalyptus sideroxylon – and place it for maximum impact. You might highlight the bark by under-planting the tree with something that has a contrasting texture and colour or you might keep it all alone so there are no distractions.

Though exactly what constitutes a distraction can be subjective. There was a furore when, almost 15 years ago, a Melbourne artist wanted to temporarily paint some of the city’s elm trees blue, but in Greece people paint bark all the time. Some say white washing the lower portions of trunks protects the trees from both insect attack and extreme summer heat but it is also about aesthetics and what some perceive as the ‘freshened-up’ air of a painted tree.

More functional but just as striking are the dark skirts on some of the cork oaks in the 100-year-old cork plantation in the National Arboretum in Canberra. They are the direct result of stripping for cork the outer layer of the bark of Quercus suber and people pose for wedding photos next to them all the time.

But leave a tree to its own devices and trunks will still rise to the fore. They might form beguiling contortions from the wind, or shoot straight up for light or develop flamboyant insect-track markings. Both the natural landscape and gardens are full of trunks with interesting colours, textures and shapes. Now is the season to appreciate them.