London: Nobody tell Shaka Cook it isn’t always like this.

On the young actor’s first overseas tour – indeed, his first trip overseas – he’s starring in a theatre show that’s the talk of the Edinburgh festival, drawing standing ovations and is the darling of the critics. 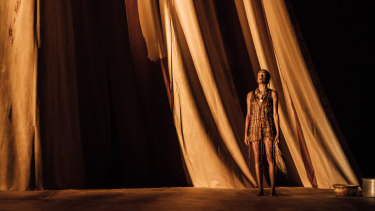 Secret River as it was performed at the Edinburgh festival.

“It’s mind blowing,” he said. “It really gives you an extra spring in your step when you’re walking down the street.”

The Sydney Theatre Company’s production of Secret River is playing this month at the Edinburgh International Festival, before a run at the National Theatre in London.

Adapted from Kate Grenville’s novel, the play stages the encounter between a convict from the slums of London and the Dharug people on the banks of the Hawkesbury river.

It has won rave, four- and five-star reviews.

The Telegraph praised its “vast-spanning significance” and “dramatic sophistication”.

“It’s unforgettable and frankly – given our ongoing need to look at the legacy of empire – unmissable,” Dominic Cavendish wrote.

The Times called the story “genius” and said London would be “lucky to have it” when it arrived at the National.

The Guardian loved its combination of “masterly storytelling” and “metaphorical resonance”, and the Scotsman praised the “flawless performances”.

Patrick McIntyre, executive director of the STC, said it had taken a long time to set the tour up. 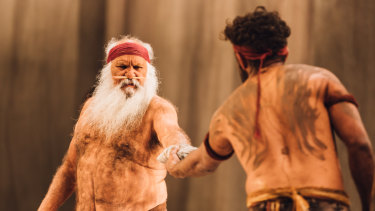 “This is as much an English story as an Australian one,” he said. “It has been really great to see so many reviewers acknowledging that the truths of the global colonial past – the violence of it and the trauma and dispossession that continue to this day – must also be faced by modern European nations that benefited so much.

“Particularly in an age in which Europe now feels like it is being ‘invaded’ and wants to close its borders.”

The show is part of a movement in Australian art that is seeking to “cement the idea that the time has come for our history to be told truthfully in terms of the real struggle and resistance on behalf of Aboriginal people against the land being taken by Europeans”, McIntyre said.

The National Theatre is on the banks of the Thames where the characters Will and Sal Thornhill begin their story.

“It feels like an opportunity to complete a cultural circle with this tour and we are grateful to the cast and crew for going there to tell the story,” McIntyre said. “it’s a very hard one to tell, to live through those emotions night after night.”

Cook said he had noticed a difference in the British audiences – reactions such as laughs often come in different places.

“But it’s beautiful,” he said. “I’m just overwhelmed by so many feelings: excitement, I’ve got a lot of nerves going through me and there’s this sense of pride at the same time, to be able to tell this story and work with these people.”

Cook grew up in the Pilbara in northern Western Australia, and said he feels a “great sense of responsibility” to tell this play’s story.

“It’s not just a play, it’s history,” he said. “This didn’t just happen to one family, it happened to many families, all over Australia and the world as well. It’s a story about white settlers and indigenous people. A lot of people around the world have had these stories.”