A student at one of London’s most expensive private universities roughs it up with a skint family-of-four and their pet pig in tonight’s Rich Kids Go Skint.

James Mooney, 19, originally from Ohio, reveals his great-great grandfather, who shared the same name, was one of the wealthiest man in Cincinnati in the 1900s.

On the 5Star show airing tonight at 9pm, James, who can spend up to £200 on food for himself a week, goes to stay with community nurse Sherry Whibley, her husband Stuart and their two daughters, Sharlie, 19 and Skye, nine, in Gillingham, Kent.

Sherry, who wearns £2,000 a month, is the sole breadwinner after Stuart was left unable to work after a work accident four years ago, forcing them to sell the family home and move to rented accomodation.

The Whibleys, who admit people think they are ‘bonkers,’ have a pet pig named Sam, who sleeps in the living room with James during his stay – a far cry from his £1,900-a-month central London flat. 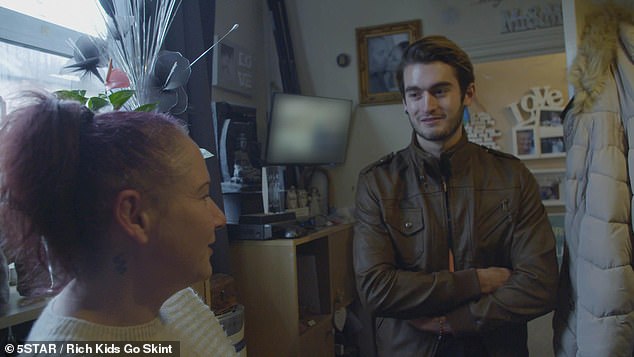 James Mooney, 19, originally from Ohio, whose wealthy parents fund his lifestyle in London, moves in community nurse Sherry Whibley and her family in Gillingham for this week’s Rich Kids Go Skint 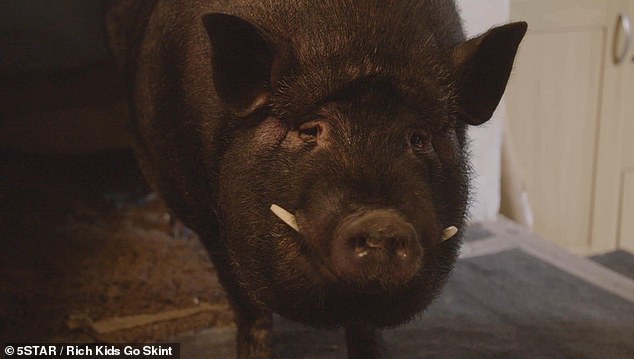 James goes to stay with the Whibleys, a family-of-four living Gillingham, Kent, who own a pet pig named Sam. The family pet was supposed to be a micro pig, but grew much bigger than expected

But while staying with the Whibleys, he has to make due with sleeping in the living room and sharing the space with the family’s two pugs and their pig, Sam.

Sherry sheepishly explains on the show that Sam was meant to be a teacup pig, but turned out to be anything but. The family have a ‘beware of the pig’ sign on their front door, which James dismisses as a joke, until he comes face to face with Sam.

One of James’ first tasks is to clean the pen at the back of the house, and does get his £160 trainers dirty.

But James completes the challenges, and Sherry is left impressed, saying she was ‘fully expecting him to heave or swear.’ 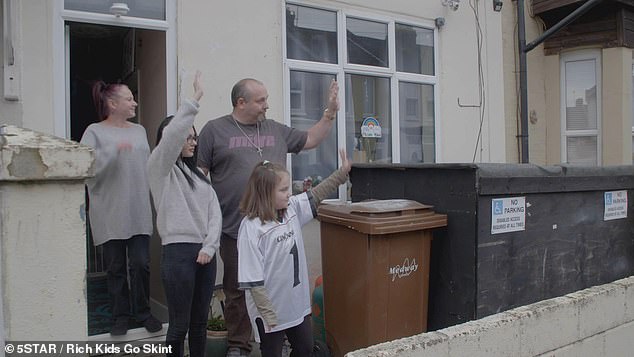 Pictured from left to right: Sherry, Charlie, Stuart and Skye Whibley bidding a fond farewell to James after his stay

Meanwhile, James says that the pig is ‘awesome’, but ‘living with it and cleaning up with it is definitely a hassle.’

James, who lives alone in his flat, is also not sure about the implications of sleeping in the same room as a pig who sleeps inside at night.

Before bedding down for the night, James calls his older sister Audrey and tells her he’ll be sleeping with the pig. 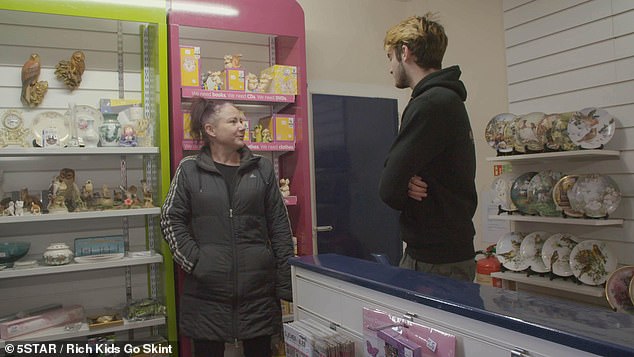 Sherry, who earns £12.73 an hour as a community nurse, takes James to the local charity shop to show him what she can afford on a budget 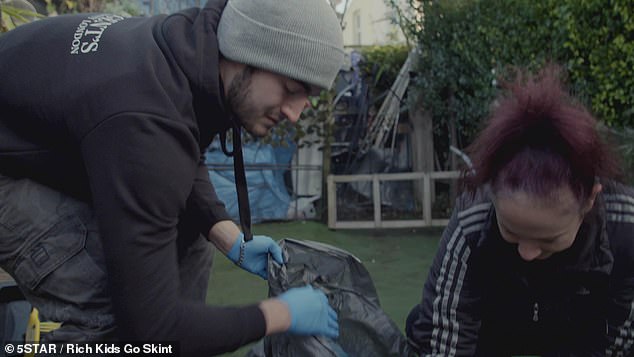 James, pictured, helps Sherry clean the courtyard where Sam the pig and the family’s two dogs go to the toilet 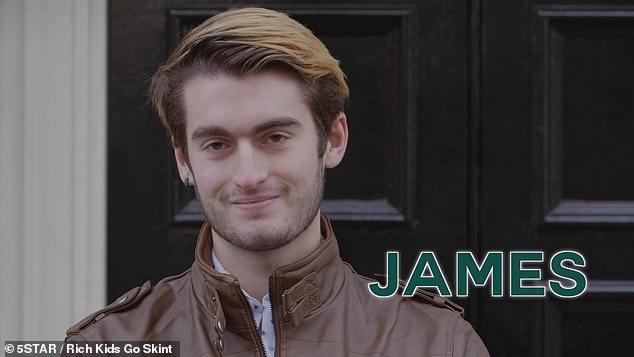 James lives in a £1,900-a-month accommodation in central London and studies in one of the city’s most expensive private universities

‘Being with the pig is not hygienic but it makes me realise how much more spacious my living room is right now,’ he tells her.

The next day, James admits he’s had trouble sleeping because Sam ‘grunted and snored.’

‘I don’t know what the hygienic problems of breathing the same air all the time is, but I would think it’s not good for you,’ the heir says.

But father-of-two Stuart jokes that pig dung can be turned into coal, and that he’s made toast by setting it on fire, while a skeptical James nods politely.

James grew up on his family’s multi-million dollars estate in Ohio, and by the end of high school, he was driving his own Mustang, costing £30,000.

‘Nobody would tell me they’re jealous to my face but I could tell they were,’ he says.

Revealing he comes from ‘old money’ one of his family heirlooms is an American flag dating back to the American Revolution, which had been passed down from generation to generation and is estimated to be worth $5 million (£3.5m). 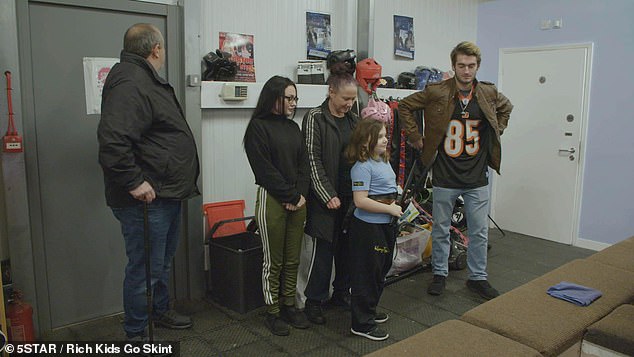 The Whibleys take James to attend Skye’s Kung Fu class. Sherry makes sure she has enough to pay the £37 monthly fee so that her youngest daughter can learn to defend herself

In London, James studies at Regent’s University, and admits he is surrounded by people who enjoy the same luxury lifestyle he does.

‘I’ve met a lot of posh kids, that’s just how it is at the most expensive school in England,’ he says.

The heir admits he has second thoughts about using his parents’ money.

‘I feel bad about that sometimes, but yeah, it’s not my money,’ he says.

‘Most of the time my idea of fun is just working out or hanging out with friends,’ he says. 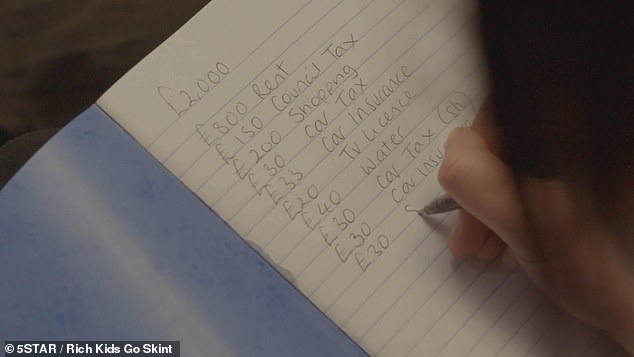 Pictured: The Whibleys’ finances breakdown. Sherry says she spends £800 a month on rent alone, which is almost half her earnings

James, who says he feels like ‘an alien’ in the UK, admits he lives a cushy life, and doesn’t know ‘what to expect’ from living with a family on the breadline.

‘I haven’t experienced much poverty first hand, it’s going to be a real experience for me,’ he says at the start of the episode.

They live in a rented two-bedroom house, and James, who grew up in a mansion and currently lives in near Regent’s Park, is struck by how small it is.

‘The joint together houses, it’s just more compact and inner city,’ he says, adding: ‘The square footage in one of these homes would be about the inside of a barn in my part of the US.’ 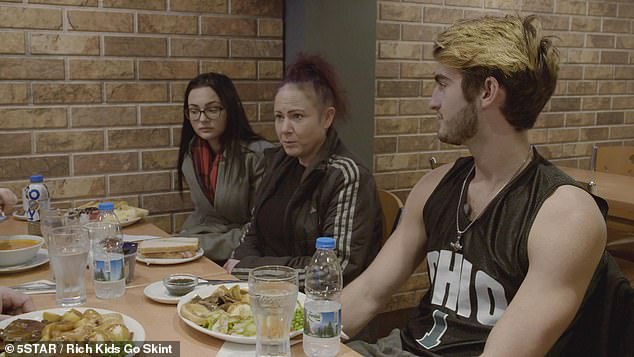 Sherry earns £12.73 an hour as a community nurse, a job that she loves, and the Whibleys don’t receive housing benefits.

‘We don’t claim housing benefits or council tax so there have been times when I’ve been thinking “I don’t know where I’m going to find the money for the rent”,’ Sherry says,

Eldest daughter Sharlie also works as a nurse, on a zero hours contract, while she studies to become a paramedic, and is saving up to move out.

‘I just kept getting more respect for her because I can see they’re a hard-working family,’ James says to the camera.

In spite of their financial struggle, the family still spend £37 a month to get Skye Kung Fu lessons.

Stuart says he believes it’s important Skye learns to defend herself, due to the rising knife crime hitting Gillingham.

Sharlie reveals on the show that one of her friends was killed in a knife attack.

Staying with the family, James learns more about how the Whibleys make a penny last while going thrift shopping with Sherry.

However, he’s properly put to the test when the couple challenge him to buy enough food for a dinner for five, using only £5.

After deciding to cook burgers – and to skip the meal so he can afford four portions – the rich kids flounders, buying only meat and buns with no veggies.

The Whibleys always make sure to eat healthily on their small budget, and mother-of-two Sherry explains to the heir that he could have bought a ‘massive’ bolognese for everyone if he had used his money more wisely.

During James stay, Sherry says she feels the heir is not opening up fully, and she wants to encourage him to share more. 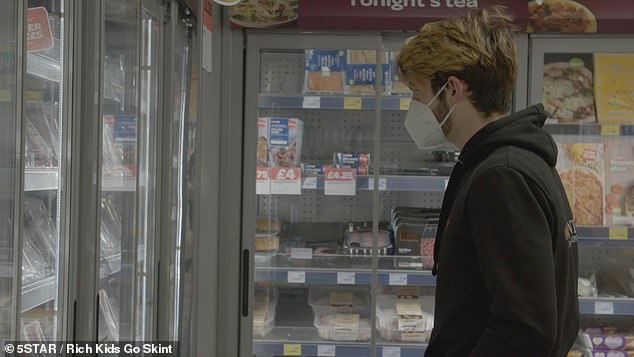 The heir is put to the test and has to buy a dinner for five on a £5 budget, pictured, But he decides to skip the meal himself so he only has to buy four portions

But James admits to the camera he feels like giving more detail about his luxury lifestyle would ‘boasting,’ and he says he doesn’t want to be like that.

But as he cooks the dinner, Sherry and him have a heart-to-heart about their childhoods.

‘My childhood’s been all over the place, it’s part of the reason I don’t let money define me. Money doesn’t get you out of everything so you gotta be your own person,’ James tells Sherry.

‘My childhood was not a happy one and what you just said, I identify with that,’ the mother-of-two replies.

She goes on to explain that her mother was ‘mentally ill’ and would use money to show her children she liked them.

Sherry says the years of abuse she suffered during her childhood made her ‘withdraw.’

‘A lot of this has been about the difference in wealth and lifestyle, but to me it was way more than that,’ James tells her.

‘Not only just how you live but your personalities. What you’ve been through and no matter how hard it is, you still open up, which I really respect,’ he adds.

The two share a big hug after opening up, with a teary Sherry saying: ‘If I’d had a son, I would have liked to have one like you.’

Later on, James admits: ‘It made me think of my own mum and what she thinks of me, and I think she’d be proud of me.’

At the end of his stay, James asks the couple about their ‘endgame.’ Sherry reveals she can’t work full time due to a car accident when she was six that left her with epilepsy.

She says she hopes to get her epilepsy under control in order to be able to work more. Meanwhile, Stuart says he hopes to get back on the property ladder.

As a thank you for the family’s welcome, James buys them mugs, a bottle of Champagne, and a University of Cincinnati jersey for Skye.

His conversation with Sherry has left a deep impact on him as well.

‘When Sherry told me that she got the vibe from me that I couldn’t open up easily, that was something I didn’t even really see about myself,’ he says.

‘My mum is a therapist so I spent my whole life being anaylsed with everything I do, so that’s where it stems from,’ he adds.

‘We’re all the same, it’s just different circumstances,’ she says.

‘I’ve never had a son and that used to upset me and now I kinda feel like I got that, I know that feeling,’ she says.

‘He doesn’t have his family in England, so he’s always welcome,’ she adds.

Meanwhile, James has reduced his spending since filming the show, and he’s been keeping regular contact with the Whibleys.