To onlookers, it may have appeared Parliament was overtaken by the Brady Bunch this week.

The chambers were host not only to the politicians seated on their benches but television screens with a checkerboard of faces as, for the first time, members and senators were allowed to join via videolink. 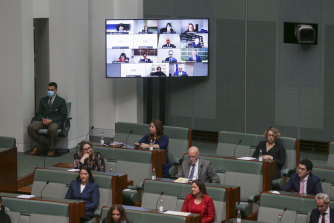 In the lower house, 19 members contributed virtually throughout the week, mostly from Victoria and Queensland where quarantine rules made it impractical for many to travel to Canberra. They started off with deputy Labor leader Richard Marles and government backbencher Russell Broadbent asking questions on Monday.

By Thursday, absent MPs were contributing to the full gamut of chamber business: speaking on legislation, asking questions, making 90-second statements, responding to committee reports and even raising a point of order during question time.

After the successful first week of the hybrid model, some MPs are calling for the trial to become a permanent feature.

Labor MP Anika Wells, who is pregnant with twins, says although it took six months for Parliament to adapt to the coronavirus pandemic, from here on it should lead by example. 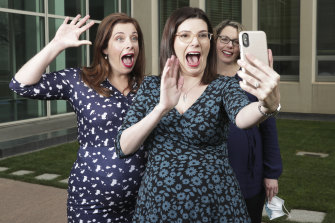 "Flexibility in the workplace shouldn't just be for extraordinary times and it shouldn't just be considered something that is nice for white, middle-class women to have around their childcare responsibilities," she said. "The PM loves his hi-vis and his construction jobs – perhaps if we consider it more like valuable family infrastructure we might make more headway in this space."

Her Victorian colleague Kate Thwaites dialled in to Parliament from her Melbourne office because medical appointments for her own pregnancy made it impossible to comply with the fortnight quarantine required to come to Canberra.

"People have really appreciated actually seeing that we, like them, have been able to embrace change and get on with our work," she said. "There are times in everyone's life when flexibility is really important … changes that make it easier for people to participate flexibly are a positive thing."

Parliamentary committees have been holding public hearings via videoconference throughout the pandemic and there is an appetite for that to continue even once the crisis is over, since it enables witnesses to appear more easily. 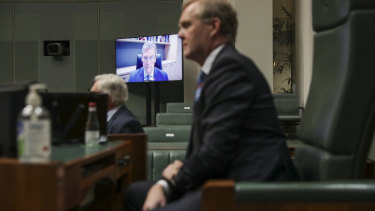 MP for Groom, John McVeigh, is seen on a screen as Speaker Tony Smith meets with the remote Parliament team. Credit:Alex Ellinghausen

However, there is strong feeling from many in Parliament the actual chambers should always meet in person. The rules set out for members to appear virtually during this sitting said they had to satisfy the Speaker the pandemic meant it was "essentially impossible, unreasonably impracticable, or would give rise to an unreasonable risk for the member to physically attend".

Labor senator Marielle Smith, also part of the baby boom on the opposition benches, said Parliament should strive to meet in person and would perform best with people physically in Canberra. But she said it was also important those who had been hit hardest by the crisis – young people, women and young families – had their voices represented.

"To me this is a question of what should be done when meeting in person, as a collective or as individuals, isn't possible. And on that front, we should be creative enough to adapt and allow for that participation because it is important," she said.

"The community expects Parliament to lead on these sorts of these issues, but instead it has looked like the government has been dragged kicking and screaming to a sensible result here."

The most important news, analysis and insights delivered to your inbox at the start and end of each day. Sign up to The Sydney Morning Herald’s newsletter here and The Age’s newsletter here.